Ancient Warfare at the Museum - 4 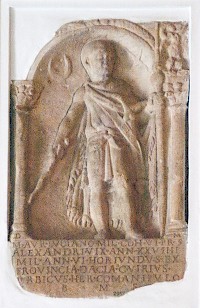 I’m going to make a prediction: if you keep following this series, you’ll get a sneaking suspicion I’ve got an unhealthy interest in tombstones (and helmets, those too). That’d probably not be terribly wrong. I’ll do my best to include other ancient military items from museums, but it’s just that there’s often a lot to say about these memorials. So here’s another. We published both a drawing and a photo of the tombstone of the Praetorian Guardsman Marcus Aurelius Lucianus in Ancient Warfare I.2, nearly ten years ago. Since the renaissance era, it resides high up on the wall in one of the smallest, but most interesting rooms in the Capitoline Museums in Rome, where it has been quite literally walled in among several other tombstones, making it quite difficult to photograph properly. Still, there’s a lot to be seen and said about this memorial. Let’s start with the text. After all, that’s what Lucianus or his heirs wanted us to know about. Amended and translated from the Latin, it reads:

To the gods of the underworld (is dedicated) Marcus Aurelius Lucianus, soldier of the sixth Praetorian Cohort, from the Centuria of Alexander. He lived 29 years and served six years. He was born in the province of Dacia. Arranged by Caius Virius Urbicus, his heir and comrade in arms, for he was very worthy.

Even if it wasn’t obvious from the image of the tombstone (see explanation below), it’s clear we’re dealing with at least a late 2nd century tombstone here. Lucianus states he was no Italian and his prenomen and nomen suggest an ancestor gained citizenship under Marcus Aurelius (r.161-180), allowing Lucianus to serve not in an auxiliary unit, but in the highest-status infantry unit, the Praetorian Guard. Considering the era we’re probably in and the origins of Lucianus, it’s tempting to think he was among those Balkan soldiers of Septimius Severus’ army who were transferred into the guard in 193 after the new emperor disbanded the extant Guard for attempting to auction the throne to the highest bidder. But that’d just be guesswork.

What about the tombstone itself? Lucianus is depicted in a decorated frame, backed by a crescent moon and star, pointing to (life in) the afterlife. The soldier himself is depicted without any armour, but clearly identifiable as a soldier. In his right hand, he carries a fustis, a cudgel to assist his work in crowd control, and a weighted pilum in his left hand. He’s got a ringschnallegürtel - a ring-buckle-belt around his waist, which is typical for the late 2nd or 3rd century AD, and a wide, nicely decorated sword-belt on his right shoulder under the clasp of a fringed cloak. Lucianus may not have lived long, but he certainly made sure he stood out as a Praetorian soldier in death.