Ancient Warfare at the Museum - 5 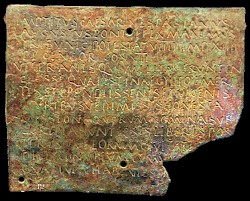 In contrast to last week’s undoubtedly heavy chunk of stone, this week I’d like to discuss a type of item that’s physically very limited size and weight, but of great importance to the study of the Roman army: the so-called diploma. That’s what they’re called, but it’s not really what they are. They are the well over 1,000 surviving (fragments of) certificates of completed military service and the legal rights granted to their holders at that time. They’re not formal government documents however.

We don’t know the exact procedure for granting diplomas and how it worked administratively, but it seems that every year provincial governors and the prefects of the Praetorian Guard, the Urban Cohorts, and the Praetorian (Italian) fleets would order their administrative staff to send a list to Rome of those soldiers under their command who had completed their assigned term of service. Most likely imperial administrators - we don’t know of an ‘Imperial general staff’ or anything like it - would compile these lists and publish them once a year as an imperial decree in bronze, listing the eligible veterans and the exact legal rights they had gained. Obviously such decrees could be consulted in Rome, but nowhere else. Veterans who could afford to do so and who thought it sufficiently important to be able to prove their status, could have a personalized copy made in a workshop in Rome. Validated by seven witnesses, the certificate was copied onto two hinged plates on both the inside and the outside, folded, bound together and sealed as an anti-tampering measure. At about the size of a very thin paperback book, the certificate was eminently portable and could be taken home to the veteran’s domicile to prove his own status as well of that of his wife and family.

So what can we learn from all these diplomas? First thing to remember, they’re dated, so (for once) we have a series of archaeological finds that we can put in perfect chronological order, assuming the date-part has survived on the diploma of course. Even if the date is missing, it seems witnesses often served for multiple certificates at once, so if you have that list, and you can match it to a dated diploma, you’re in business. Second, these diplomas document the legal status of veterans and their families over time. Soldiers’ and veterans’ rights changed through the years, and we can see how in these documents. Third, they provide unit names, so we can determine when the Italian fleets became Praetorian, for instance, but more importantly, for each provincial diploma, they list all units which had qualifying veterans that year. In other words, they provide an excellent record for the composition of provincial garrisons. It appears naming isn’t always as strict as we’d like it to be, but if you put them all together and add other information, you can create a very nice picture of shifting units through the ages (although more would definitely be better!). Fourth, diplomas name names: we get to know (or get confirmation of) the names of consuls, governors, prefects and veterans and their ranks. And finally, on occasion they support information from other sources. The best-known example of this is the (small) series of diplomas given out to veterans of Legio I and II Adiutrix. You’d normally not expect legionary soldiers to need documents proving their citizenship (after all, no citizenship means no service in the legion), but these had been raised from non-citizen fleet soldiers in the Year of the Four Emperors (as told by Tacitus). Some of these soldiers evidently were close to having fulfilled their time and were honorably dismissed shortly after their transfer into the legions, and they clearly wanted to make sure their updated status was codified.

What is the diploma in the image above? That photo was published in Ancient Warfare V.5, which dealt with the Imperial Roman navy. It’s a diploma from the short reign of the emperor Titus (AD 79 to be precise), copied out for the veteran Marcus Papirius from Arsinoë (Egypt). He is specifically called one of the remiges (“rowers”), an interesting distinction not often made in diplomas that may have all kinds of implications. But that’s for another day. Papirius served in the Alexandrine fleet, although it’s not named as such, for twenty-six years “or more” as it’s always listed in diplomas, and was granted citizenship together with his (already extant) family. This diploma, found in Egypt, can now be seen in the British Museum, London.