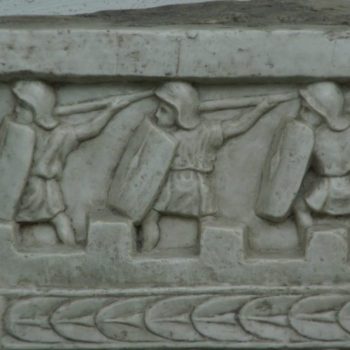 Gladiator, warts and all, is one of my favourite movies. I probably owe it a debt of gratitude, in fact. Without its success, RomanArmyTalk(.com) would likely not have grown so much in its early years, and Ancient Warfare might never have come to pass. Perish the thought!

I can't help but cringe though whenever I hear Russell Crowe's character introduce himself as "Maximus Decimus Meridius" (also when they shout "Roma Victor" but that's not relevant to the rest of this blog). The name consists of Roman(-esque) bits and it looks like a proper tria nomina, but it isn't. Pedantry, probably, and it has little to do with Ancient Warfare.

Something similar struck me this week about this set of miniatures. First things first, I love 'em. We can niggle about the scalloped edge of the archer's hamata or some other details but they look great to me. The decals for the shield emblems seem to be based on actual reliefs with maritime themes too, so all good there. The set's name though... "Legio Prima Adiutrix - 500 Denarii Auxillary Marine Warband". I've got some issues here. Warband and the 500 Denarii is undoubtedly a reference to game-terms, fair enough (though they should ask for a raise - even auxiliaries got paid better than that!). "Auxillary" is surely a typo, which leaves us with Legio Prima Adiutrix - Auxiliary marines.

The idea that the Romans created auxiliary cohorts out of superfluous or otherwise better used naval troops is perfectly correct as I recently blogged (twice: one and two). Apart from the short-lived Cohors Nauticorum/Nautarum there were at least two Cohortes Classica, but likely more as the Cohors Aelia Classica in 2nd century Britain is probably not the same as the Cohors I Classica in Germania Inferior, and both are very likely unrelated to the Cohors Classica that turns up in the province of Arabia(!) in the mid second century. Interestingly, this suggests that there was only limited central control of auxiliary unit names.

The biggest problem is of course the conflation of a legion and an auxiliary unit. It's just not an option. Transfer from one to the other was possible (for officers, mostly), but for soldiers it was very rare. Due to the difference in status between an auxiliary unit and a legion, the one direction was a real promotion with better pay and instant-citizenship, while the other was punishment (one or two examples seem to exist).

Exceptions you ask? Well, now that you mention it, yes, they exist. The Imperial, and especially the Italic, fleets were used as a manpower reservoir in times of crisis. The aforementioned Cohors Classica is likely an example of that, Legio X Fretensis also received a number of classiarii as reinforcements, possibly shortly after the end of the Maccabean revolt. When it was time to demob in AD 150, 22 of these former sailors asked the governor of Syria to confirm their (higher) status to the governor of Egypt, where they came from. He did as requested, even though legionaries normally did not get any such paperwork.

The best known examples are of course the Legiones Adiutrices, the two surviving units of the units raised just before and during the Year of the Four Emperors from the Misenate and Ravennate fleets. They were both made into formal legions and, on that occasion, the naval personnel formally received citizenship, for otherwise they would of course not qualify for legionary service.

I know, it's all a bit 'stitch-nazi'-esque, but sue me, the Roman imperial army and fleet are my wheelhouse. I may also have to get some of that range, because you know, purdy!

Final note: as far as I can see, the story about the giant Gabara comes from the Wikipedia page about Legio I Adiutrix. It in turn is based on a lexicon from 1823, which quotes from another book that quotes Pliny's NH 7.16. The legion isn't mentioned there. That would, in fact, have been pretty surprising. Pliny is quite specific that this all happened in the reign of Claudius, who died well before the idea of raising a legion from the marines of the Classis Misenensis was a glint in Nero's eye... Pliny was the commander of that fleet when he died during the eruption of Vesuvius in AD 79. We can be pretty certain he would've known.