Creating the centrefold for VII.6

Each issue of Ancient Warfare has a two-page centrefold. Issue VII.6, on the wars of Marcus Aurelius, was no different. For Sidney Dean’s article on part of the Marcomannic Wars, talented artist Radu Oltean create an impressive two-page spread depicting Ballus receiving Ballomar and the other tribes’ delegates in the Praetorium courtyard of the Roman army base at Carnuntum on the Danube.

Radu was kind enough to send pictures that detail how he goes about creating a picture. Usually, the writer of the article proposes an idea for a picture that, if the editor agrees, is sent to the artist. The writer usually supplies most of the information that the artist needs to create the image. Fortunately, most of our illustrators have a good knowledge of the ancient world and are not afraid to do their own research. Radu even wrote a book on the Dacian Wars.

Radu makes heavy use of photos and other reference materials: “I have visited a lot of major museums in Europe and have collected thousands of photos of artifacts. In many museums, photography is allowed and modern digital cameras enable me to take photos in low light conditions. Whenever I visit a country I always return with kilos’ worth of books on history and archaeology. In addition, I am also a member of a historical reenactment group.”

Below are some of the reference pictures that Radu used as a source of inspiration for many of the elements that ended up in the final drawing: 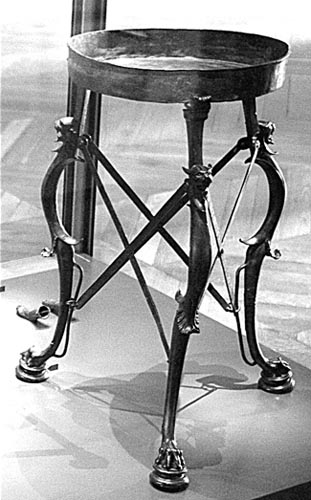 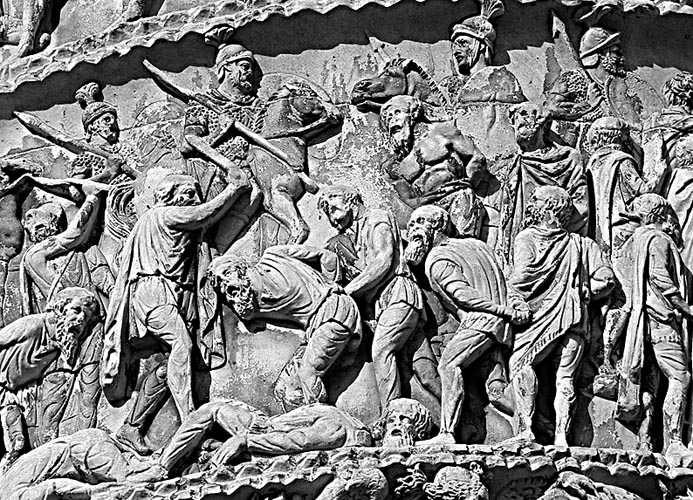 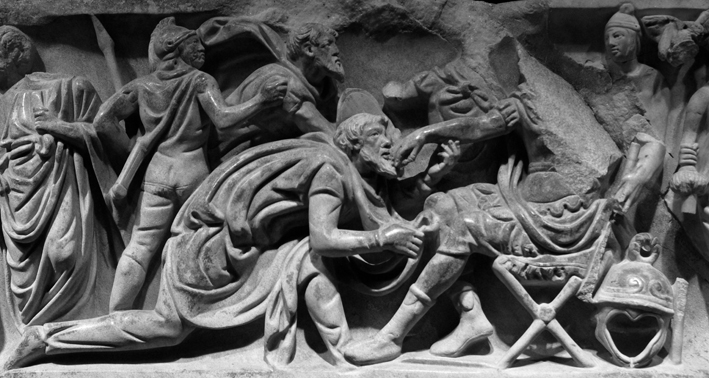 Every drawing starts with a sketch and the centrefold was no different. This sketch would be taken as the basis for the final image: 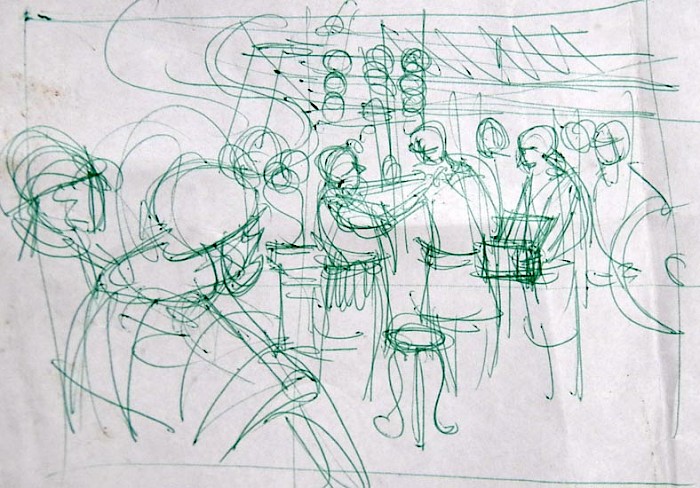 The rough image is used to create more detailed sketches: 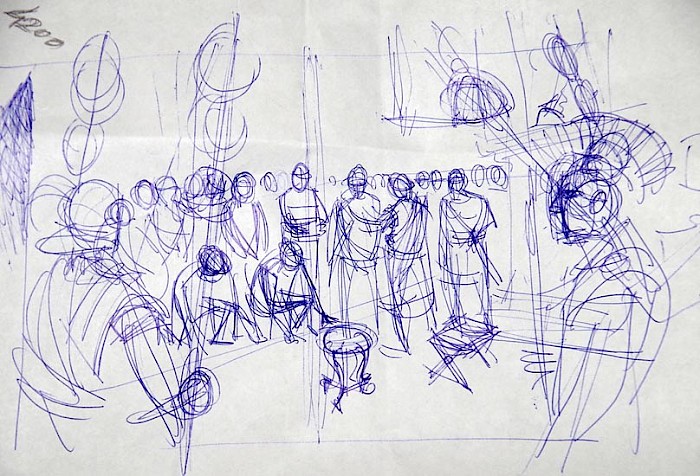 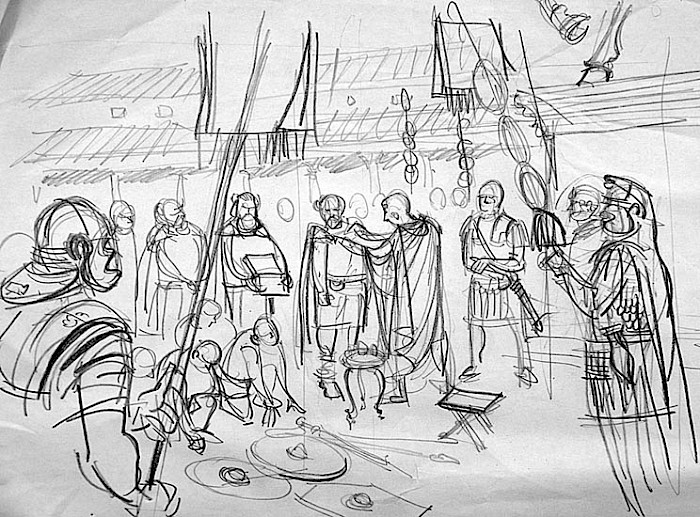 With the basics nailed down, it’s time to create some further reference material in the form of photos of models (including Radu himself) in various poses to aid in finalizing the line drawing. Radu explains: “I can make photographs of people immediately if I want, posed in any attitude. I have friends who help me. Sometimes, when I am on a tight schedule, I can rely on my wife to take pictures of me. I also rely on pencil sketches in addition to black and white photos. After many years, I have a vast image bank of photos of my friends in static and dynamic poses.” 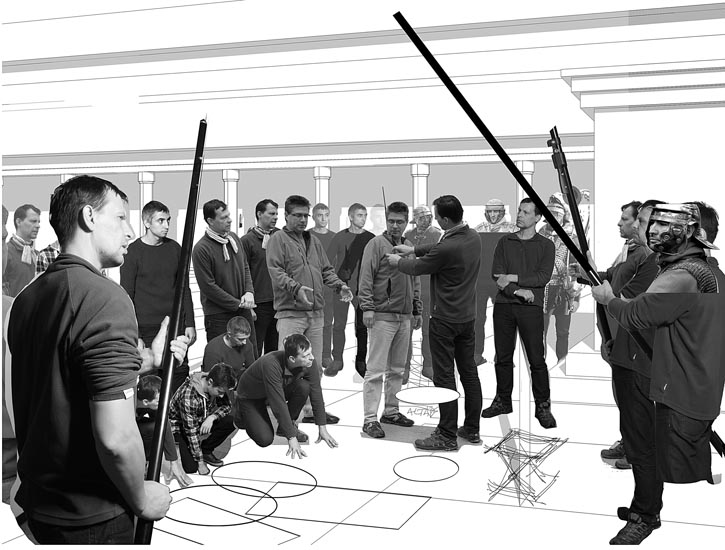 “For me, as an illustrator of history, digital technology helps me a lot,” says Radu. “Now, I can build scenery in difficult perspectives using simple 3D programs such as SketchUp.” Using SketchUp, he created a 3D computer model for the inside of the Praetorium:

The line drawing is finalized: 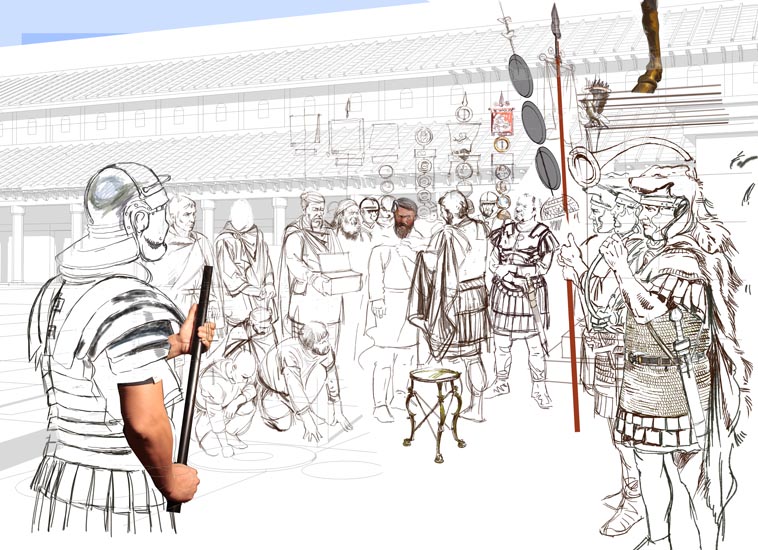 The colours can be blocked in and then refined: 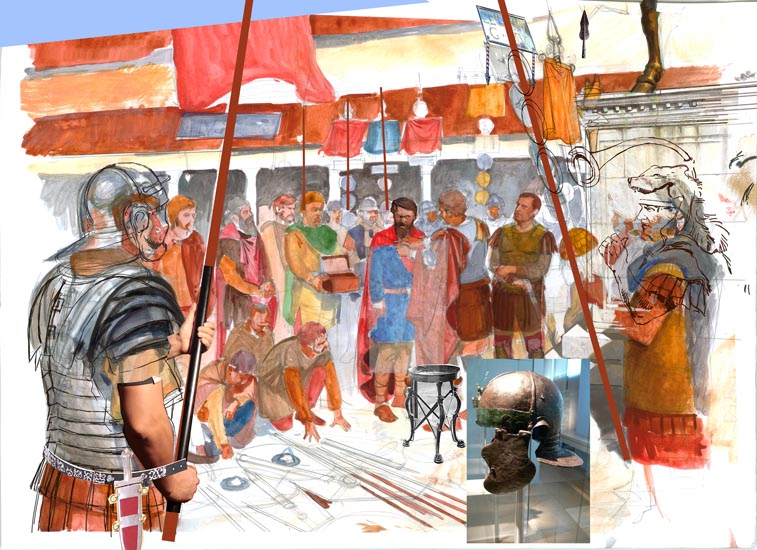 Photos continue to be used on different layers in Photoshop as a reference: 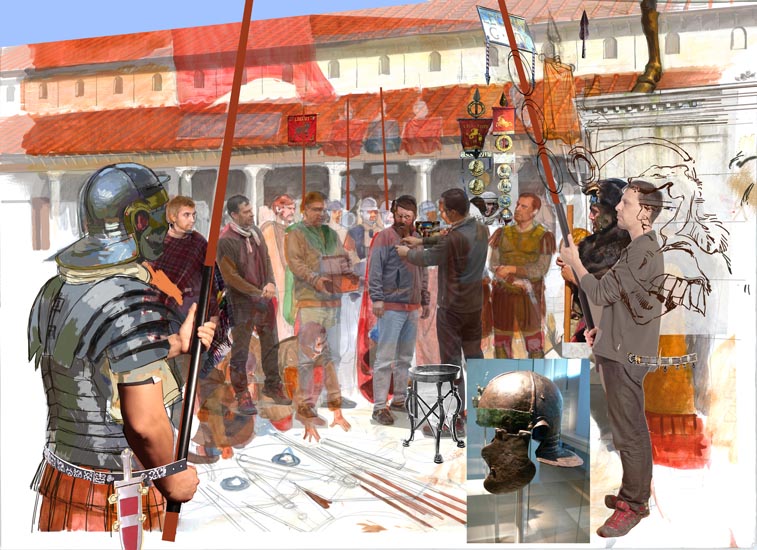 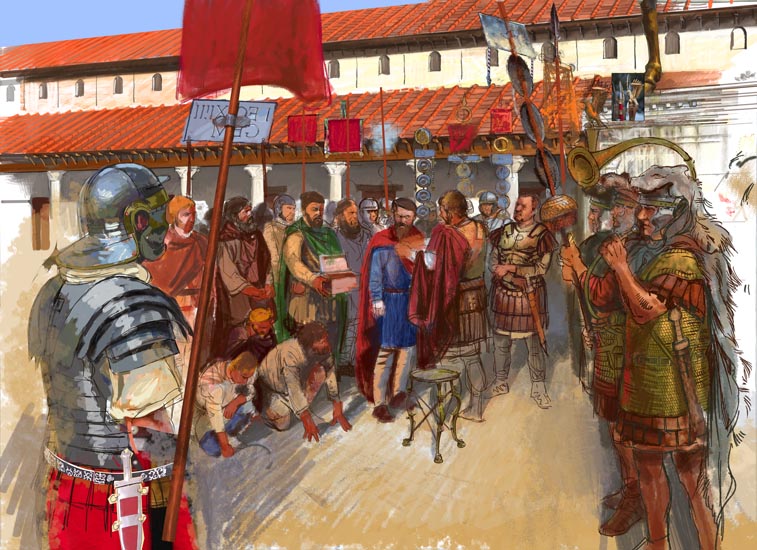 The image is nearly done: 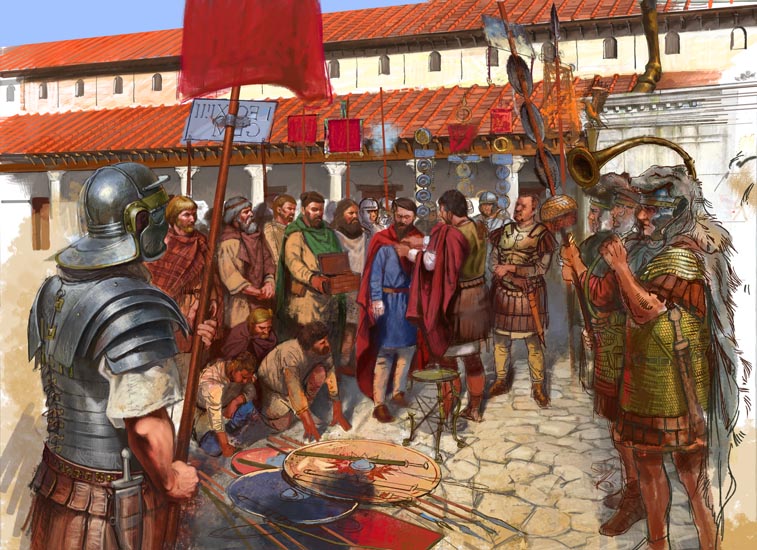 And here’s the final result, as printed in the magazine: 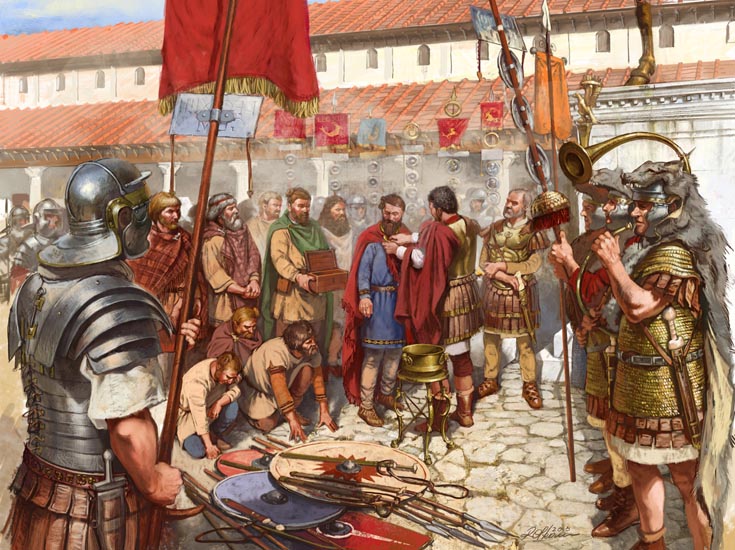 Radu has a blog that you can visit here. He has most recently finished the centrefold for issue VIII.1, “Traitors, deserters, and defectors”, for Arnold Blumberg’s article on Memnon of Rhodes, and is currently working on a naval battle for issue VIII.2, “Struggles of the Ionian Greeks”. I will put an article similar to this one up for his work for issue VIII.1 once that has returned from the printer’s.