There is something inately appealing – to modern audiences in any event – about the historical figure of Spartacus. His is the story of a slave, forced to fight as a gladiator, who rises up against the Roman Republic and manages to put together an army that would prove almost as difficult to defeat as Hannibal’s Carthaginian hordes were in the third century BC.

It’s not a surprise, then, that the story of Spartacus has been retold again and again in modern times, from Kubrick’s movie to historical novels by Ben Kane and others. Spartacus has become the hero of the downtrodden, even if ancient authors don’t cast him as someone who fought against slavery or was even opposed to the concept. Within the context of the ancient world, that shouldn’t be too much of a surprise: slavery was widespread and commonly accepted. In an eery vision of the future, Aristotle even suggested that slavery could be abolished only if automata – robots – were created. 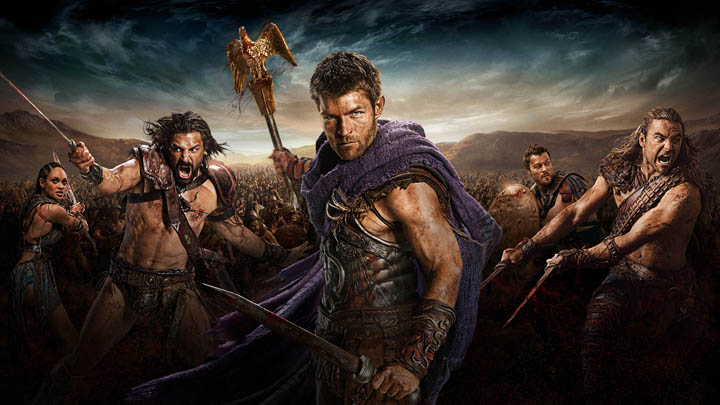 The most vivid recent depiction of the story of Spartacus is the show I’ve discussed earlier. My two-part blog post focused on the first season, in which Spartacus was captured and brought to Capua, where he fought in the arena, until finally he decided enough was enough and rebelled, killing his master. But the show had three more seasons, and I want to briefly write about each of these and recommend that you watch them. Or rather, watch them if you think you can handle the show’s graphic depictions of violence and sex. The nudity – both male and female in more or less equal measure, frequently and often casually – doesn’t really need to be commented on too much, since for those familiar with the art of the Graeco-Roman world this should be par for the course.

Gods of the Arena

Andy Whitfield, the charismatic actor who portrayed Spartacus in the first season, was diagnosed with non-Hodgkin lymphoma. The producers didn’t want to film a second season without Whitfield. In order to give him time to undergo treatment, they decided to create a prequel season, detailing the events in Batiatus’ ludus before the arrival of Spartacus. This six-part miniseries, Spartacus: Gods of the Arena, focuses on Batiatus (John Hannah), his wife Lucretia (Lucy Lawless), and other characters from the first season. Most notably, we see Crixus (Manu Bennet)’s first months as a gladiator and more time is devoted to expanding on Oenomaus (Peter Mensah). 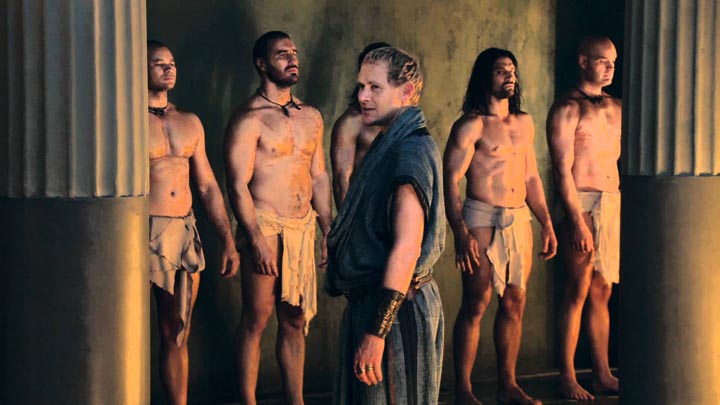 I don’t think I made very clear in my discussion of the first season just how likable the cast is. These are all interesting actors who really seem to give the show their all. The dialogue – somewhat akward and strange, uttered with complete sincerity by this cast of consummate professionals – helps in the creation of strange, foreign world. The visuals naturally add to creating an atmosphere that, while derivative of Gladiator, 300, and a few other movies, the show nevertheless manages to make its own. There’s a certain intensity and sincerity to the performances and the production of the show, from set design and costumes to special effects, that makes it something quite unlike anything else, even if it takes a few episodes to grow on you.

With Crixus as yet unexperienced, Gods of the Arena introduces a completely fresh character as the show’s new champion: another Gallic warrior by the name of Gannicus. (In the historical accounts, Gannicus was, in fact, the name of another Gallic gladiator who was among Spartacus’ inner circle.) Dustin Clare plays the character as a nonchalant warrior in the mould of Robert E. Howard’s Conan – he excells at making his opponents shed blood, but would rather spend his time drinking and whoring. It’s to the writers’ credit that they manage to make each of the gladiator characters so memorable, including minor characters such as Barca (Anatonio Te Maioha). 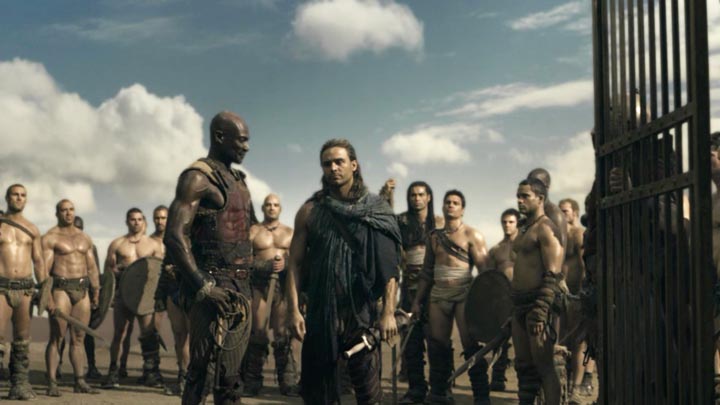 Aside from following the careers of rivals Gannicus (a champion on the road to freedom) and Crixus (a new recruit who wants to become the next champion of Capua), Gods of the Arena sheds further light on Batiatus. It’s good to see more of John Hannah. He clearly loves the character and he oozes charisma whenever he is on screen. In this miniseries, we see him trying to assert his independence from his father, the overbearing and overly cautious elder Batiatus, played by the impressively-voiced Jeffrey Thomas. By the end of the season, Lucretia (Lucy Lawless) reasserts that she is indeed a viper to be reckoned with.

Vengeance and War of the Damned

Sadly, Andy Whitfield died on 11 September 2011, aged just 39. Liam McIntyre was hired to replace him as Spartacus in the next season. While McIntyre is certainly not a bad fit for the part, I do feel that something was lost in the transition. Whitfield had a peculiar facial structure and a certain softness around the eyes that McIntyre lacks. McIntyre’s Spartacus is more certain of his course and somewhat harsher in his treatment of others, whereas Whitfield’s character seemed to wrestle more with his conscience and came across as more gentle.

While Gods of the Arena is a prequel to Blood & Sand, it nevertheless introduces a few plot elements and characters that are vitally important for the third and fourth seasons (or second and third seasons if you don’t want to consider the miniseries a ‘season’ as such). These two seasons follow Spartacus and his compatriots during what we now refer to as the Third Servile War (73–71 BC). 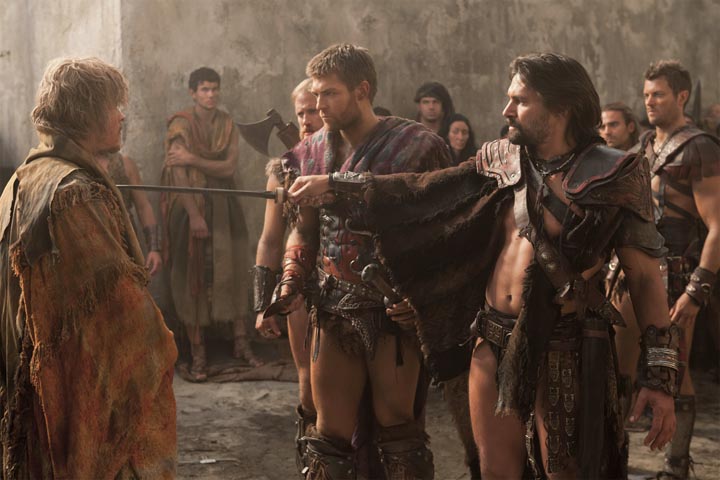 The first of these seasons, Spartacus: Vengeance, focuses on the early part of the war, during which Spartacus and his followers slowly accrue a following while being pursued by Gaius Claudius Glaber (Craig Parker). The tension ramps up nicely over the course of ten episodes, culminating in a desperate siege on Mount Vesuvius, where Spartacus and a few compatriots ultimately manage to achieve victory using a ruse inspired by the historical accounts.

Whereas Vengeance sees Spartacus hard pressed only to finally gain the upper hand, War of the Damned depicts the former gladiators and their army as hardened veterans who have gone undefeated for a long time. Again taking inspiration from the historical records, the show sees Spartacus capture a city in Southern Italy and trying to forge an alliance with Cilician pirates while also dealing with growing dissafection among some of his followers, most notably Crixus.

In Blood & Sand and Vengance, Glaber was a driven and ambitious, but ultimately unlikable foe to Spartacus. The amount of mistakes he racked up over the course of the series means that viewers are likely to regard him as somewhat of a bumbling idiot. War of the Damned introduces two very capable and ruthless Roman enemies in the form of Marcus Licinius Crassus (Simon Merrells) and Julius Caesar (Todd Lasance, seemingly channelling a young Brad Pitt). Crassus and Caesar engage in an elaborate game of cat-and-mouse with Spartacus and his crew, and the writers sometimes have one side coming out ahead and some times the other, and victories and losses are always hard on either side. I like Lasance’s portrayal of a womanizing and adventurous Caesar, and the writers make the most out of the fact that, as far as the historical Caesar is concerned, we don’t really know what he was doing around this time.

Naturally, the series’ ending is a foregone conclusion for anyone who is even vaguely familiar with the historical outcome of the Third Servile War. But the show manages to make the story captivating and riveting, and on more than one occasion you’re on the edge of your seat, wondering whether or not this-or-that character is going to survive when you’re in fact already aware of what happens next. It’s a credit to the writers that they’ve managed to make the show as compelling as it is. There are moments when Spartacus is plainly ridiculous, such as when heads and limbs are cut off and a fountain of blood spurts forth in slow motion, but the show never stops taking itself seriously and thus never descends into the realm of self-parody. 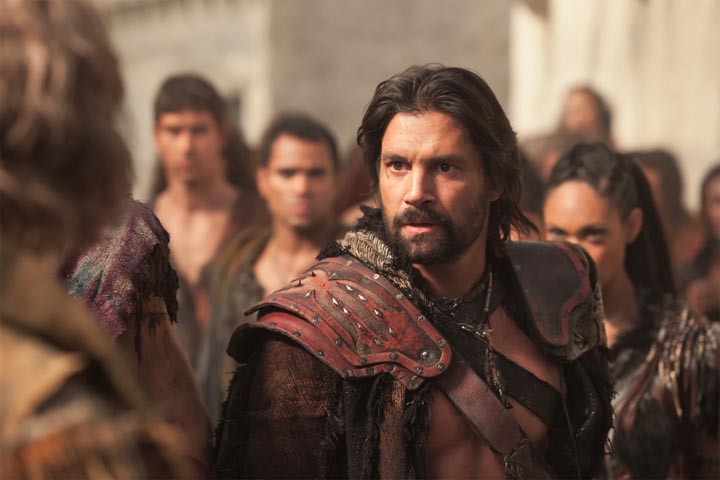 Starz’s Spartacus might not be perfect, and there are certainly a fair share of historical inaccuracies (my favourite being the anachronistic lorica segmentata worn by Crassus’ ‘superior’ Roman troops), but it does seem to capture the spirit of the time. As stated in earlier reviews, sometimes it’s more important to be authentic rather than accurate, and Spartacus at least seems to evoke the ancient world in its own, highly stylized way. I recommend you check out the show in its entirity if you have the chance.

And we should really devote a future issue of Ancient Warfare to the Third Servile War.