Earlier this year, I played through Ubisoft’s Far Cry Primal, an open-world, first-person shooter game set in the Stone Age. I did a game diary on the game that I published on my personal website, where I would play through the game and then write about it and give some archaeological commentary. That series consists of more than a dozen blog posts, but I figured an abridged version would be of interest to readers of Ancient Warfare.

The land of Oros

Far Cry Primal is part of the series Far Cry, which has been an open-world first-person shooter from the second game onwards. Whereas the other games are set in the present – with the exception of the retro 1980s Far Cry: Blood Dragon – Primal transports players back to the Stone Age, around 10,000 BC. The game is set somewhere in Central Europe, though the geography has been truncated to give players visual variety without the need to walk for hours on end. Hence, you get snowy mountains in the north, temperate river valleys in the middle, and warmer, marshy lands in the south.

The game takes place during the time where the Late Palaeolithic gave way to the Mesolithic (in Europe; elsewhere, such as in the Near East, some use the term ‘Epipalaeolithic’, since the period there is more a continuation of the Palaeolithic). The ice was receding and the climate became milder. Coastal regions became more important. Some say that in the Mesolithic, Man transformed from a hunter-gatherer into a hunter-gatherer-fisher, to emphasize the importance of fishing and the collection of molluscs. In reality, a lot of the fine tools – harpoons, fish hooks, and so forth – were already introduced in the Late Palaeolithic. 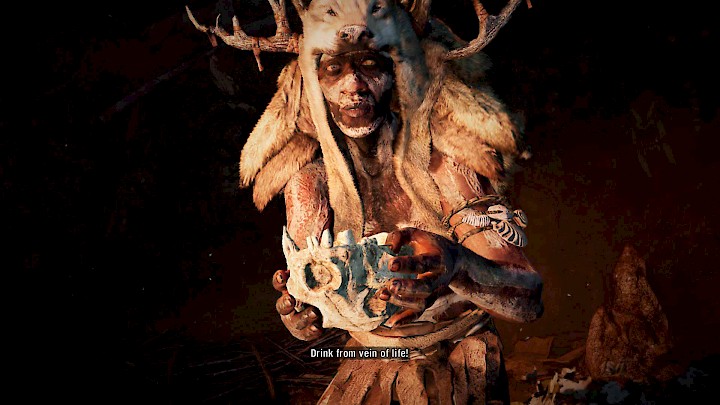 In Far Cry Primal, you take on the role of Takkar, a member of the tribe of the Wenja. Your people are scattered all over the place, and it’s your task to bring them back together at your base of operations, a village that you will expand and upgrade as you complete missions. But the game world isn’t a safe place: aside from various predators and other aggressive animals, there are also two rival tribes: the cannibalistic Udam, modelled vaguely – and anachronistically – after Neanderthals, recognizable by their red bodypaint, and the more advanced, fire-worshipping Izila, who practice an early form of agriculture and who paint themselves blue.

There are a few things that the game gets right, and quite a lot that it gets either outright wrong or is at least implausible. The flora, such as the predominance of birch trees, seems accurate considering the game’s setting. The fauna, however, is a curious mix. The sabre-toothed cats in the game, modelled after Smilodon, are attested only for North America. Likewise, Primal’s European forests are home to tapirs, which occur only in South America. Cave bears were most likely already extinct by 10,000 BC.

Nevertheless, the way that humans interacted with the environment appears authentic. Animals seem to respond to humans in a realistic way, even though the aggressiveness of especially the predators has been increased beyond what seems very plausible. The social structures of the tribes, with their strong leaders occupying a position appointed or acquired rather than inherited, also seems in keeping with the archaeological evidence and anthropological observations. Of course, the population density in the game is far higher than it would have been, and you essentially slaughter your way through countless enemies. In reality, people would be more widely dispersed, and violence might not have been the answer to everything. 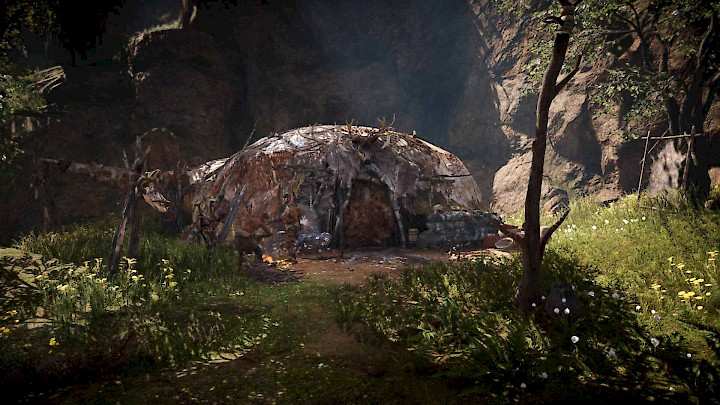 Likewise, the villages used by the tribes are a bit larger than would seem logical for this time period, even though in an environmetn as rich as Oros – the valley in which the game is set – it might not be too implausible. But the Izila also practice a seemingly refined form of agriculture that is implausible in 10,000 BC. You’ll also run across pots as you explore the world and enter villages and encampments, and those would not be invented until a few thousand years later at the earliest, especially in Europe.

Since Far Cry Primal is a game, you’ll spend a lot of the time playing through missions that require the indiscriminate slaughter of heeps of rival tribesmen. As I wrote in one of my original blog posts, this raises an interesting question: when did people start inflicting violence on each other? Rather than summarize what I wrote before, let me quote myself here:

Traditionally, hunter-gatherers are regarded as peaceful. It is only with the advent of farming, it is argued, when people started living in villages, that it became opportune for some to engage in predatory warfare against rival settlements. According to this line of thought, the advent of civilization in the Neolithic went hand-in-hand with the emergence of warfare, of violence between groups of people. By contrast, the hunter-gatherers lived in tune with nature and with their fellow humans. Noble savages, indeed.

However, this idyllic picture seems unwarranted. As soon as hominins developed tools necessary for killing animals, they would have been able to aim the pointy end at other members of their species, too. For the Palaeolithic, we have relatively little in the way of skeletal material. But the earliest evidence for violence between humans is a Neanderthal femur from Mugharet-es-Skhul, Mount Carmel (Israel), that featured a wound almost certainly inflicted by a wooden javelin. Many skulls have also been uncovered from the Palaeolithic era that were fractured. While these no doubt could have been caused by animals and injuries, it cannot be excluded that some were the result of hominin violence.

By the Upper Palaeolithic, behaviourally modern humans were developing new weapons. The atlatl or spear-thrower was devised to hurl javelins with greater accuracy and force at a target. Later still, toward the end of the period, the bow and arrow were invented, which is a technically sophisticated device. The remains of child from Grimaldi (Italy), from the Gravettian and dated ca. 25,000/22,000 BC, had a projectile embedded in the spinal column. A young woman from the San Teodoro Cave (Sicily), dated to ca. 12,000 BC, had a flint point stuck in the pelvis. The child almost certainly must have been the victim of a raid; the woman might also have been, or was otherwise involved in the fighting.

An obvious source of information for this time period would be cave paintings, but sadly humans are seldom included. There are, of course, depictions of animals that are apparently struck by arrows or javelins (though some argue that the arrow-like things scribbled in the paintings are not actually projectiles, but have some other significance). Famously, a human figure is shown collapsing as the result of a bizon attack in the so-called ‘Well scene’ at Lascaux (France), dated to ca. 15,000 BC. One cave-painting at Cougnac has been argued to represent a man pierced by spears or arrows. Likewise, an engraving on a cave fall from Cosquer cave, Provence (France), dated to ca. 20,000 BC, has been interpreted as showing a human-like figure falling on his back after being hit by arrows, and taken as proof for the existence of murder or capital punishment in the Palaeolithic.

From the Mesolithic, at least, we have indisputable evidence for human aggression. Bone and stone projectiles have been found inside rib cages and abdominal areas that were probably not grave goods, but evidence for injuries in the soft flesh of the victims. Skulls from Grosse Ofnet, Germany, show injuries that could only have been inflicted by other human beings. Graves containing multiple bodies, of both sexes and all ages, with fatal injuries, are interpreted as victims of violence, most likely raids by rival groups. During the Mesolithic, population densities increased and, depending on the environment, people often became more sedentary, which would explain an increase in inter-group violence.

By the Neolithic, of course, the evidence for warfare is completely unambiguous. Aside from finds of skeletons with injuries, the Neolithic also sees the creation of the earliest stone fortifications, most famously at Jericho, for example, dated to 8000 BC. Some have argued that the earliest wall at Jericho was built for defence against floods and did not have a military purpose. But evidence for ditches, palisades, and walls are known from a large number of Neolithic sites, such as the double oval enclosure at Schletz in Austria.

In any event, it seems safe to assume that violence is an innate part of human nature. Aside from the archaeological examples, further proof of violence among hunter-gatherer societies can be added from anthropology. The tribesmen of Papua New Guinea, for example, frequently engaged in tribal warfare, though casualties were often limited. Indeed, it has been argued that only peoples living in the arctic (e.g. Eskimo) escaped inter-group violence, owing to the hostility of the environment.

There’s plenty of reference material out there if you’re interested. I enjoyed the relevant essay by French anthropologist Pierre Clastres that are available as Archaeology of Violence (2010), a translation of a collection from 1980. There is also a useful chapter by Slavomil Vencl in Ancient Warfare: Archaeological Perspectives (1999) edited by John Carman and Anthony Harding (which I also reviewed). I also enjoyed the book by Jean Guilaine and Jean Zammit, available in English as The Origins of War: Violence in Prehistory (2005). As a jumping off point for further study, I also think Warfare and Society: Archaeological and Social Anthropological Perspectives (2006), edited by Ton Otto, Henrik Thrane, and Helle Vandkilde, is very useful.

Despite all the inaccuracies, Far Cry Primal nevertheless manages to feel authentic. Sure, it would be better if you could interact with your rivals in more diplomatic ways, but this is a Far Cry game first and foremost. There’s little excuse for including animals that either never lived in Europe or were extinct before the time that the game is set in, but this is a game first and foremost and not a documentary. 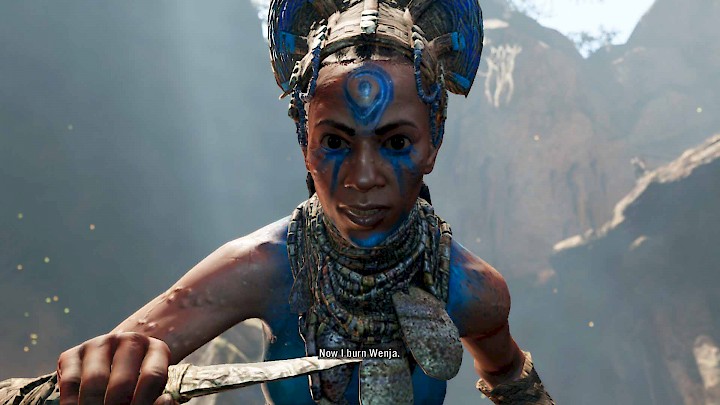 Nevertheless, it’s obvious that the developers did study a lot of material in preparation for the game, and they even hired linguists to construct believable ancient languages spoken by Takkar and the others. All in all, if you’re interested in playing an interesting game set in the past, I heartily recommend you check out Far Cry Primal. It’s been out for a while, so you should probably be able to pick it up relatively cheap during a sale.