As part of the celebrations for the release of the fiftieth issue of Ancient Warfare (IX.4), later this year, I have been writing blog posts that highlight a particular previous issue of the magazine. For this third instalment in the series Flashback Friday, I have picked issue III.2, ‘Alexander’s funeral games: the wars of the successors’.

As you are perhaps aware, each volume of Ancient Warfare follows a particular pattern. There are usually two Roman issues, two Greek issues, one issue dealing with a broad topic (such as mercenaries), and one theme devoted to a non-Greco-Roman or Bronze Age topic. The Roman and Greek issues are usually divided into an ‘early’ and a ‘late’ theme. For the Greek issues, that means a theme devoted to the Archaic or Classical period (‘early’) and a Hellenistic theme (‘late’).

Issues devoted to Hellenistic themes are always very popular, but they pose particular problems to a magazine like Ancient Warfare. There are plenty of written sources to use as a basis for articles, but getting decent pictures of objects that are actually military in nature is always a problem. There’s a definite limit to the amount of times we might get away with posting a detail from the Alexander sarcophagus, after all! Still, for the most part I think we succeed in making these issues visually interesting, helped not in the least by the contributions from our talented pool of artists.

Issue III.2 focuses on the Wars of the Successors, the relatively brief but violent few decades after the death of Alexander the Great, in which his generals and other military commanders jockeyed for power, each declaring themselves the heir of the great conqueror and trying to secure at least part of his empire as their own dominion.

The historical introduction by Bob Bennett and Mike Roberts does a good job of outlining the important events for the period (they also wrote a two-volume book on the topic, published by our friends over at Pen & Sword). With the advantage of hindsight, I think I would have probably added a short(ish) list of events or timeline somewhere, since that might have been helpful.

Konstantin Nossov, an expert in Greek fortifications, contributed the Source article for this issue, discussing Philon of Byzantium, a military engineer who lived around the middle of the third century BC. One of the nice things about Konstantin, aside from his knowledge and the care that he takes when it comes to writing in English, is that he has a good amount of photos to illustrate his articles with and also employs his own illustrator, Vladimir Gobulev, who produces great plans and technical drawings, such as the ones that grace the pages of this article.

Duncan Campbell’s contribution focused on the rise and fall of Demetrius Poliorcetes. His nickname, Poliorcetes (‘the Besieger’) suggests that the importance of fortifications and sieges, and thus follows nicely from Konstantin’s Source article. Despite the attention lavished on pitched battles in open terrain, most battles in the ancient world would actually have focused on laying siege to fortified cities. 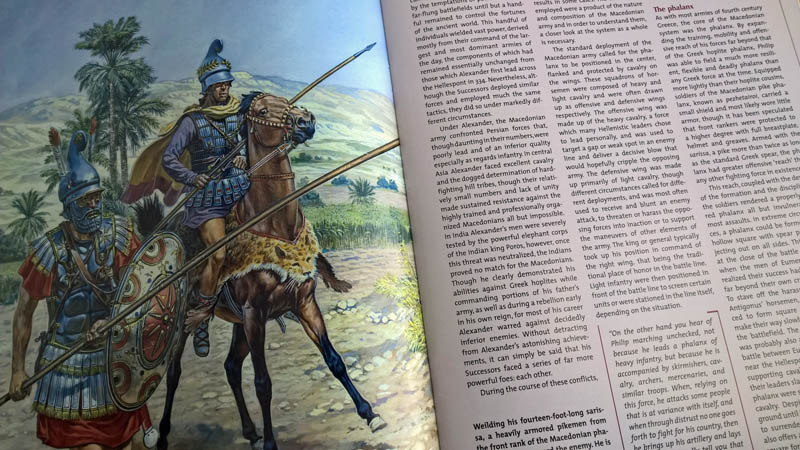 The article by Joseph Pietrykowski focuses on the ‘Armies and tactics in the Age of the Successors’. This extensive article includes two beautiful full-page illustrations by Igor Dzis. Every issue of Ancient Warfare usually includes at least one article that focuses on a battle and this one is no different: Michael Park discusses the Battle of Gabiene (316 BC). Johnny Shumate created a great full-page snapshot of some of the action, while Carlos de la Rocha produced a series of diagrams showing the course of the battle.

Christian Koepfer wrote a short, one-page article on perhaps the most characteristic weapon of Macedonian-style armies, the sarissa, with a drawing created by Andrew Brozyna. Christian’s article rounds out all of the themed articles to this issue.

As always, there are non-theme-related articles. Svenja Grosser’s Special focuses on Roman gladiators, while Raffaele D’Amato’s article on a faber navalis from Herculaneum (with a great illustration by Graham Sumner). Murray Dahm closes the issue with an article on Vegetius in his series Be a General.

If you haven’t read this issue yet, you can still order the paper version in our webshop. A digital version is also available if you prefer to read it on your tablet or something. If the Hellenistic period is of particular interest to you, you can also purchase a collection of issues of Ancient Warfare on that topic.