Today is the deadline for article submissions for issue IX.4, on the Punic Wars. As stated before, number IX.4 will be the fiftieth issue of Ancient Warfare. In order to mark the occasion, I want to post, every other week or so, a retrospective about an older issue of Ancient Warfare, which some of our newer readers may have overlooked.

To kick off ‘flashback Friday’, I want to discuss issue III.1, on mercenaries in the ancient world. It was published early in 2009 (six years ago!), and it’s interesting to note the changes. For example, these earlier issues of Ancient Warfare had one or two features that have since disappeared, for a variety of reasons, such as Murray Dahm’s segment ‘Be a general’. Of course, new features have been added (more regular Special and Debate articles, for example), but it’s fun to see how the magazine has been retooled over time.

This issue touches on a topic that I think is always of interest. Mercenaries, I think, elicit a kind of ambiguous feeling. On the one hand, they are men who seem to be motivated solely by wealth: they fight for pay instead of out of a deep-felt love of country or desire to protect one’s loved ones. On the other hand, it is also easy to associate them with adventure and excitement. Xenophon’s Anabasis, for example, his account of a mercenary force trapped in hostile territory, has all the qualities of an exciting book for boys.

Regular contributor Michael Taylor’s introduction does a good job of introducing the topic, even though I think he probably underestimates the importance of mercenaries before the fourth century BC. The idea that there was a sudden ‘rise of the mercenary’ around that time tends to ignore the importance of mercenaries even in Archaic Greece. The brother of the poet Alcaeus (floruit ca. 600 BC) served as a mercenary in Babylon, and we know that Greek mercenaries were important in Saite Dynasty Egypt in the seventh and sixth centuries BC.

Christian Koepfer contributed a short article on a helmet from Heraclea, located in southern Italy. The helmet was recovered from a grave dated to the later fourth century BC. It has been exquisitely preserved. We haven’t done ‘Find’ articles like this for a while and I should probably do something about that. I’m an archaeologist, after all!

Duncan B. Campbell, another regular contributor, wrote an article entitled ‘Theatre of war: the Hellenistic mercenary in contemporary drama’. I love this article, as it takes the issue’s theme and does something unexpected with it. By examining mercenaries through the lens of ancient theatre, we get a completely different perspective on how mercenaries were regarded in the ancient world.

The article by Joseph Pietrykowski examines the ‘General-for-hire’, the military commander who offered his service in exchange for pay, with a particular focus on the fourth century BC. It features a beautiful illustration by Johnny Shumate of what the Athenian Chabrias may have looked like. His shield is decorated with the image of an owl: a clear reference to the goddess Athena and, by extension, the city of Athens itself.

Bridget McDermott next takes us to ancient Egypt and discusses Nubian archers in the service of the Pharaohs. The article does a great job of sketching the context in which Egypt and Nubia came into contact, with the rest of the article focusing on the Middle and New Kingdom periods in particular. The article features some great photos, including one where McDermott notes that Nubian archers were often associated with wrestling matches.

Ruben Post continues the theme of mercenary archers with a piece on bowmen from Crete, though he pushes the time frame down from the Bronze Age to the Hellenistic era. The people from Crete were renowned throughout the ancient world for their archers, in the same way that Rhodes, for example, was associated with slingers. As Post notes, Cretans eventually came to work for every major military force in the ancient Mediterranean. One reason for their popularity might also have been their flexibility: Post gives an example of a Cretan who clearly did not fight as an archer. 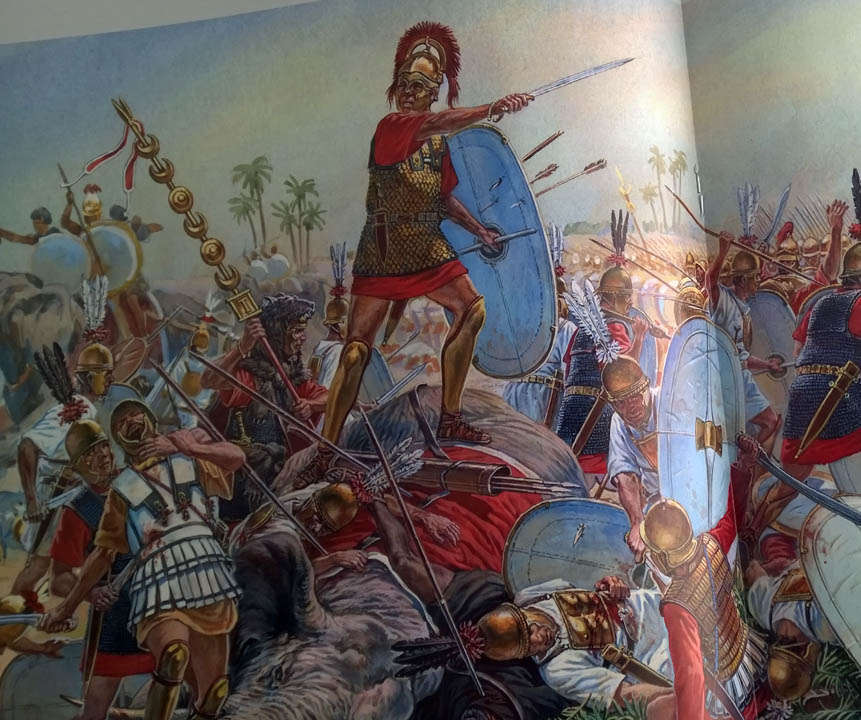 As with most issues of Ancient Warfare, this one also features an article devoted to a particular battle. Paul Bardunias is our guide for the Battle of the Bagradas River, in which the Roman Republic squared off against the Carthaginians in 255 BC. A battle map by Carlos de la Rocha on page 32 shows us how the battle between Regulus’ troops and those of Xanthippus developed, and the talented Igor Dzis made a great illustration on pp. 30–31 that gives us an idea of what the battle may have looked like, with the Romans surrounded by Carthaginian cavalry and elephants.

Alberto Pérez’s contribution deals with mercenary tribes in Anatolia. In particular, he focuses on the Galatians, who invaded what is now Turkey in the third century BC. They shocked the Hellenistic world, who first resisted them and then incorporated some of them to serve as mercenaries in their armies.

Finally, Ross Cowan brings the issue into the time of the Roman Empire with an article entitled, ‘The Emperor as paymaster: mercenaries and the imperial roman army’. Most assume that the Romans did not use mercenaries in the first three centuries AD, relying instead on auxiliaries. But Cowan makes the case that mercenaries were also employed by the Roman imperial army. This article also features a great portrait of an Eastern archer drawn by Johnny Shumate.

That will do it for today’s post, I think. This issue covers a large amount of ground with regards to mercenaries in the ancient world. The emphasis is mostly on the fourth century BC and later, so there is certainly room to explore ancient mercenaries in future issues of Ancient Warfare, I think. The paper version is still in print, but if you prefer, there’s also a PDF available to download and read on your computer or tablet.