Time for another edition of ‘Flashback Friday’ as we move inexorably closer to the release of Ancient Warfare IX.4, the fiftieth regular issue of the magazine to have appeared since its inception. Today’s focus is on issue V.1, ‘The “new man” who saved Rome: Gaius Marius at war’. The phrase ‘new man’ refers to the Roman concept of novus homo, the term used to denote a man of common origins who was the first of his family to serve in the Senate.

When Gaius Marius was born in 157 BC, in a plebeian family, Rome had been increasing its hold over much of the Mediterranean. The power of Carthage was fading and would be crushed completely in 146 BC, when the city itself was destroyed. The Roman military had not changed appreciably in a few centuries’ time and was becoming unwieldy.

When Marius rose to prominence toward the end of the second century BC, he set about to reform the Roman army. Marius did away with the manipular formations and reorganized the structures into cohorts. The army had previously been called up on an ad-hoc basis, whenever there was fighting to be done, and only a part of the population was eligible to serve in the army. Marius opened up the army to those who previously could not afford to serve and had the state provide them with the necessary equipment. The Roman army was turned into a standing force of professional soldiers.

If you want to understand the origins of the familiar Roman army, then reading this issue is a must. Alberto Pérez’s introduction provides a convenient summary of the period. Tom Hendrickson and Michael J. Taylor’s article deals with the many disparate ancient sources available on Gaius Marius. Christoper Matthew’s contribution turns to a description of Rome’s new army, with some good illustrations by Sebastian Schulz. 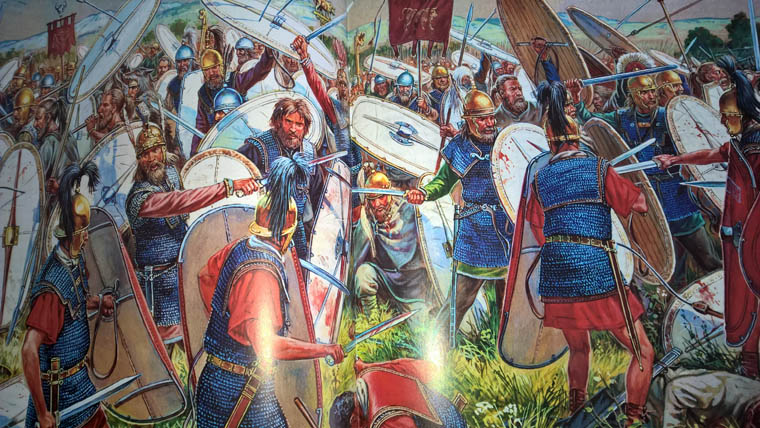 Considering the popularity of the Roman army among reenactors, it shouldn’t be a surprise that this issue’s reenactor – written by Jean-Luc Féraud – depicts one of the Marius’ soldiers. The article includes a great photograph of all the different pieces of equipment a soldier was expected to lug around, including a foraging knife, supplies for personal hygiene, a wax writing tablet, and a water flask.

Seán Hußmann delves into more detail on the career of Gaius Marius, including his conflicts with Metellus and Sulla. Lindsay Powell’s contribution deals with the Battle of Vercellae (101 BC), fought between the Cimbri and the Romans. This article is accompanied by a great centrefold illustration by the talented Igor Dzis.

Paul McDonnell-Staff discusses the myth where Marius is credited by Plutarch with replacing one of the metal pins in the Roman pilum with a wooden peg, so that it would snap upon impact and make it impossible for the enemy to use the weapon. McDonnell-Staff goes into great detail as regards different types of pila. Duncan B. Campbell’s article is on Marius’ exploits in Africa, with special emphasis on sieges and a full-page illustration by Angel García Pinto.

This issue’s ‘Special’ article is written by Michael Schmitz and deals with professionalism in Alexander’s army. Johnny Shumate’s illustration on p. 43 depicts Macedonian pezhetairoi (there’s an I missing in the caption – oops) with the sarissa. Murray Dahm’s ‘Debate’ article deals with the role of the chariot on the battlefield (as ‘tank’, archer platform, and so forth).

All in all, this is perhaps one of the most important issues on the Roman army to have in your collection. If you don’t have it already, you can still order the paper version from our shop. If digital is more your thing, you can buy and download a PDF copy instead.