Flashback Friday: the armies of Diocletian

Every few weeks, as we edge ever closer to the release of the fiftieth issue (IX.4), I post about an older instalment of Ancient Warfare. Today, I figured I’d go for a somewhat more personal angle and write about the very first issue of Ancient Warfare that I worked on as editor, namely issue VI.5, on the armies of Diocletian.

Back in 2012, Karwansaray had agreed to publish my PhD thesis (now available as Henchmen of Ares). During the talks, Jasper Oorthuys, the founding editor of Ancient Warfare, asked me if I’d be interested in covering for him should he go on a brief sabbatical. I had written two articles for Ancient Warfare and it seemed to me like a dream come true. Then, in late October, I came aboard and was immediately thrust into the process of turning submissions and loose pictures into a coherent magazine.

Those final months of 2012 were extremely busy ones. I was still working at another company back then (an ad agency, if you would believe it!), and the first few days of December my girlfriend and I had to go to Egypt to attend a conference for a few days. There was also another big project in October/November that I was involved with for one of the antiquities museums here in the Netherlands. In short, I was stretched a bit thin. Fortunately, my esteemed colleague Dirk van Gorp, editor of Medieval Warfare, jumped in to help ease me into my duties and took care of the three non-theme-related articles for this issue (Morales, Hußmann, and Taylor), as well as the reviews.

If I recall correctly, Jasper had already provided Johnny Shumate, our talented cover artist, with instructions for the cover. With Jasper’s advice, I selected authors for the themed articles, and worked with Dirk on assembling the team of artists for this issue. I had worked as an editor before, back in 2009, when during a six-month period I had collected data for a bibliography on archaeological publications related to the Netherlands, but this was a whole different kind of thing, and took a bit of getting used to!

But I think the end result turned out fine, even though there are some mistakes, the most egregious of which is no doubt my horrific ‘tracks of land’ (rather than ‘tracts of land’) in the ‘On the cover’ piece on page 58. For issue VI.6 (ancient Celts), I felt I was better prepared, but I don’t think I really hit my stride until I started working on issue VII.1, on ancient Egypt, which I still think is one of the most interesting issues that I’ve worked on. It’s been relatively smooth sailing since then.

Nevertheless, this turned out to be a strong issue, and if you’re interested in the later Roman Empire, I’d consider it required reading. Vincent van der Veen’s introduction sets the stage and I think Martijn Nicasie’s ‘Source’ article on the Notitia Dignitatum is perhaps the best popular treatment on the subject currently available. Jonathan Coulston, one of the great experts on Late Roman military equipment, wrote a great piece on Roman arms and armour of the age of Diocletian, and his article features a wonderful reconstruction painting by Graham Sumner.

Christian Koepfer, with his great eye for detail, supplied this issue’s ‘Reenactor’: a Roman legionary from the late third century AD. I think I like the three small photos on page 20 perhaps the best, since they give some idea of what these Roman soldiers might have looked like out in the wild. Paul McDonnell-Staff contributed an article on the Roman legions of ca. AD 300, for which Mark Churms contributed a full-page illustration. 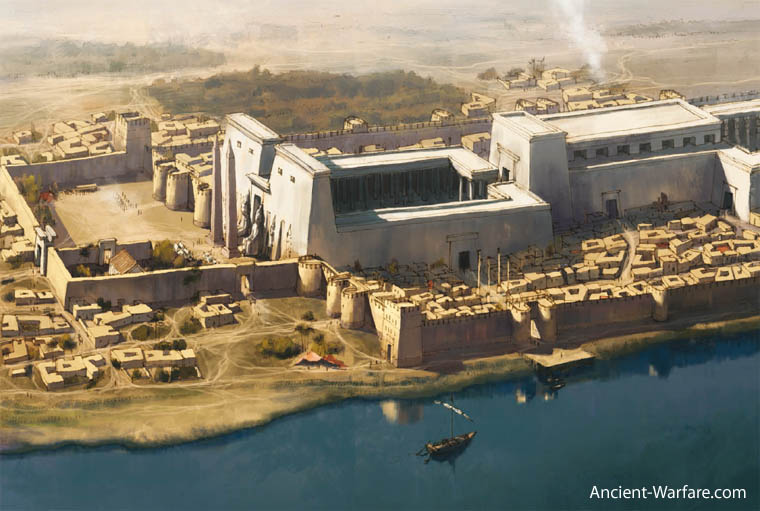 The next two articles are also of high quality and I like that they each focus on two very remote areas. Sidney Dean’s article, with a centrefold created by Johnny Shumate, deals with the Carausian Revolt and the reconquest of Britain, in the extreme western part of the Roman Empire. Christian Barthel then takes us to the extreme eastern part of the Empire in an article on Diocletian’s adventures in Egypt. The illustration by Rocío Espin on pages 36–37, depicting the temple at Luxor reused as a Roman fort, is perhaps my favourite piece in the entire issue.

The non-theme-related articles start off with a short piece by J. Albert Morales on an inscription on the stele of Aurelius Gaius. Seán Hußmann’s ‘Special’ article deals with the Siege of Syracuse (a topic we’ve discussed once or twice elsewhere in Ancient Warfare). Michael Taylor’s ‘Debate’ article asks, ‘Why did Rome go to war?’ This piece also has a great illustration by Angel García Pinto on page 50.

That will do it for today’s blog post, I think. If you haven’t read the issue yet, you can order the paper version in our webshop. A digital version is also available, if you prefer. And of course, feel free to share your comments on the issue below!