Is it Friday again? Yes, it is, and that means it’s time for another ‘Flashback Friday’. In fact, it’s the last entry in this series (see below). To keep with that theme, I’ve picked an issue of Ancient Warfare that is focused on very Late Antiquity, namely IV.3, ‘Justinian’s fireman: the campaigns of Belisarius’. This one has also proven to be very popular and is now only available as a PDF.

If you look on page 5, you’ll see the note that this issue was printed at the same time as the second Ancient Warfare Special, ‘Core of the legion’. You might wonder what’s happened to those Ancient Warfare Specials, since we haven’t published anything since the re-issue of Radu Oltean’s book last year. Rest assured, we should have something to announce later this year and the book in question – which is now largely in the editing phase! – should be in your hands some time early next year.

To get back to this issue, Sidney Dean’s historical introduction does a great job of setting the scene. Under Justinian I, the Byzantine Empire expanded again throughout the Mediterranean in the sixth century AD, and Belisarius, his trusted general, played an important part in these wars. Duncan Campbell picks up where Sidney Dean left off and zooms in on Belisarius himself, with a particular focus on the Anecdota of Procopius. The timeline on page 11 is especially useful.

Ian Hughes’s contribution focuses on Belisarius’ luck when it came to warfare. Hughes concludes that Belisarius was a gifted leader and that, for the most part, he faced enemies who were not his match when it came to ability and morale. Johnny Shumate provided a full-page illustration depicting Justinian and some dismounted heavy cavalrymen. 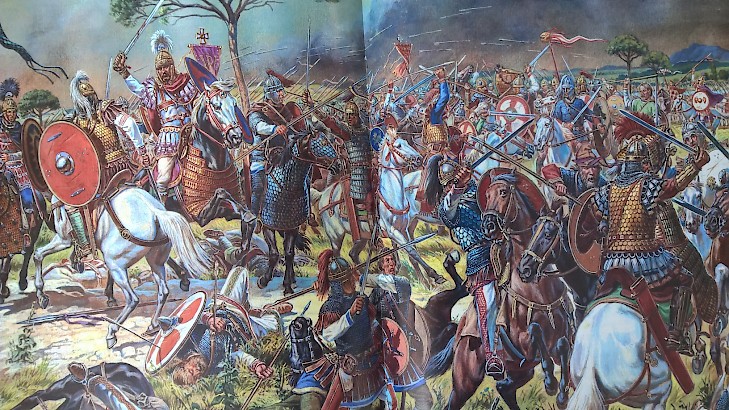 The contribution by Ross Cowan focuses on single combat in the age of Belisarius, a tradition that saw a revival in Late Antiquity as the Romans called back to an earlier, more chivalrous age. This article, too, features a full-page illustration by Johnny Shumate, this time of an ambidextrous comes foederatum. Raffaele D’Amato wrote an article on the siege of Rome, AD 537–538, and features a beautiful centrefold by Igor Dzis.

Paul Elliot’s article deals with mattiobarbuli and plumbata, which should be of particular interest to reenactors, too. Next up is a non-theme-related article on the Theban Sacred Band by David Balfour (including a picture by Angel García Pinto) and a Debate article by Paul Bardunias on the linothorax (with which I partially disagree, but that’s a topic for another discussion!).

Next Monday, I will go on a three-week holiday to Southern Italy. During that time, I won’t be posting any updates on either this blog or the one for Ancient History Magazine, as you can probably imagine that I need a bit of a break! However, I will be back in the office on 24 August, fully rested. I will then be polishing off issue IX.4, our festive, extra-thick fiftieth regular issue of Ancient Warfare magazine.

This post is therefore the final instalment in this series. I hope you enjoyed reading them! Here’s an overview of previous instalments in this series that I’ve written over the past few months:

In September and October, I will work on the follow-up to last year’s ‘Summer of Hercules’, namely the ‘Autumn of Perseus’! In this new series, I will blog about Heracles’ famous ancestor, including a discussion of Daniel Ogden’s scholarly book on the hero, and a treatment of the movie Clash of the Titans (the original, as well as the remake and the latter’s sequel), among other things.

There’s plenty to look forward to, I hope!