Next week, if all goes well, we’ll be recording a new podcast about issue IX.1, which deals with the fall of Rome. It is fitting, therefore, to draw your attention to a new game that is currently in development called Germania Magna: Border in Flames.

Germania Magna is a physical card game set during the fourth century AD. The Roman Empire is no longer as strong as it once was and it has to deal with an almost continual influx of barbarians. In the game, players take on the role of a Germanic warlord and has to lead his (or her) troops across the Rhine and Danube Rivers, into the Roman provinces themselves. 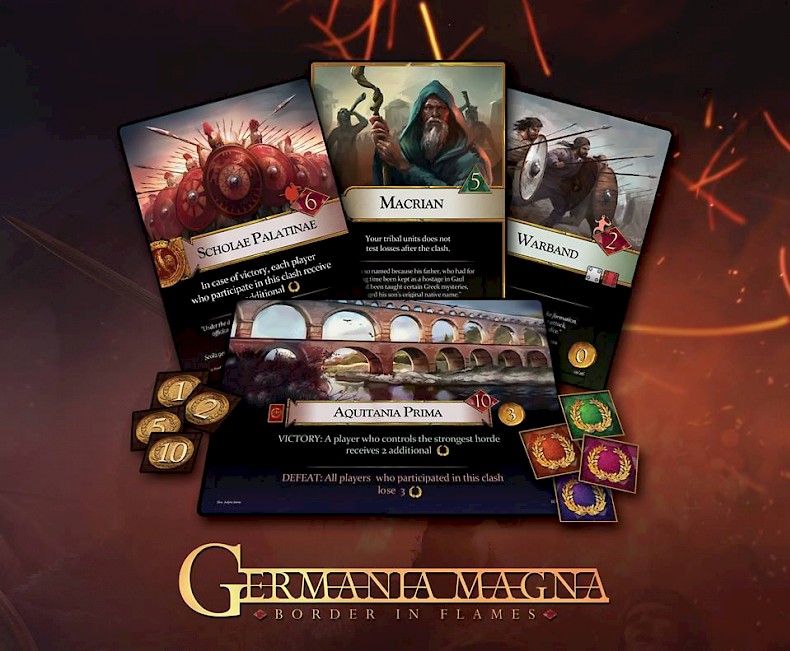 The box contains a variety of different cards (8 Chieftain cards, 15 Province cards, 15 Roman army cards, and 68 Tribal cards divided into different types), a set of dice, Glory boards and markers (to keep score), and a number of Loot counters (which serve as currency).

The object of the game is to assemble hordes of warriors and sack Roman provinces. If you successfully sack a province, you get a Glory point. The game ends when six provinces have been looted at which point the player with the highest number of Glory points wins the game. 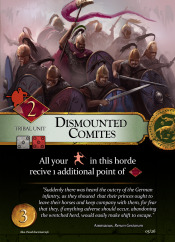 Each player starts the game with 5 Tribal cards and 5 units of Loot. Each player also has his or her own Glory board. Each round is divided into four phases. During the first phase, preparation, players receive a Chieftain card with its own unique ability and initiative value. Roman provinces are revealed that can be attacked, and each province has its own garrison.

The second phase is the supply phase, during which players draw cards from the Tribal deck and/or gain additional Loot that they can spend to play cards to the table. The latter is done in the deploy phase. In this round, players take turns based on their Chieftain’s initiative value. They pay Loot to create hordes to attack one or more provinces, and you may ally with other players.

The final phase is the clash. This is when the battles are fought and resolved. Some cards will trigger special abilities. Players who have placed hordes in the same province will cooperate. Losses are determined by rolling dice.

I haven’t had a chance to play the game myself, but it looks promising. The artwork is great. The team responsible all have been involved in the creation of other games, but Germania Magna is their first game set in ancient times. The game will be shown at the Internationale Spieltage in Essen, which is organized between 8 and 11 October 2015. The team are also planning to launch a Kickstarter campaign in the (very) near future.

If the game looks appealing to you, I’d suggest you check out and like their Facebook page, so you can follow its progress more closely. You can also have a look over at the BoardGameGeek website.