The Archaeological Museum of Rhodes has an excellent collection of ancient artefacts, including a large array of beautiful decorative pottery. Below is one example that I want to share with you today, a fragmentary red-figure cup attributed to the so-called Stieglitz Painter and dated to ca. 475–450 BC: 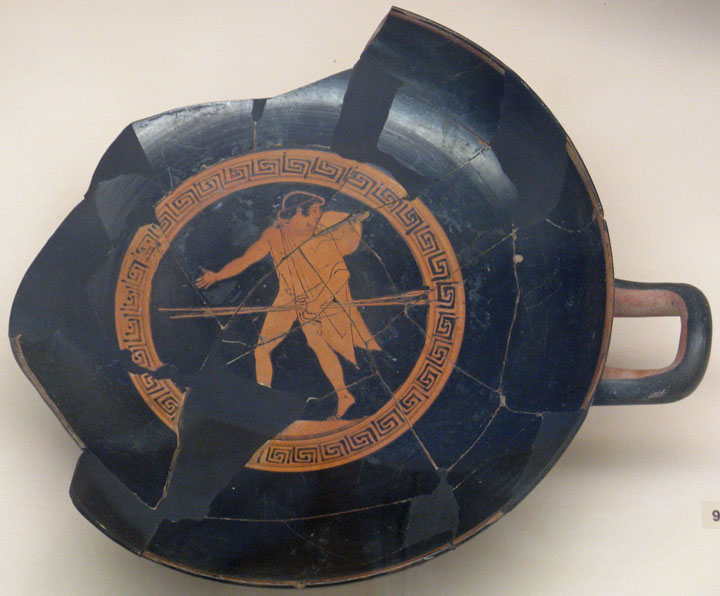 The inside of this drinking cup depicts a youth setting out to travel. We know this because he has all the necessary accoutrements. He has a petasos or sun hat, which is on his back (probably suspended by the chin-strap). He also wears a chlamys or cloak, to keep him warm and to protect him from the elements.

He is also equipped with two spears. This might suggest that he is going out to hunt, but this need not be the case. In the Odyssey, for example, men always take a spear with them when they are going out. Such public bearing of arms seems to have fallen out of favour in the course of the Archaic period, but it’s possible that when someone went out for a longer journey that he would arm himself in some manner.

If the topic is of interest to you, I recommend you read Hans van Wees’s ‘Greeks bearing arms: the state, the leisure class and the display of weapons in Archaic Greece’, published on pp. 333–378 of the collected volume Archaic Greece: New Approaches and New Evidence (1998), edited by Nick Fisher and Hans van Wees. And considering the ongoing and heated debates regarding the right to bear arms in the United States, some of contents of this paper can even be considered topical, despite having been published nearly twenty years ago!