Hegemony III: Clash of the Ancients

When I wrote my series on ancient warfare in videogames, back in 2013, I fully intended to explore a game called Hegemony, developed by Longbow Games. As it stands, I only mentioned it briefly in part 2 of that series. In 2014, a full-fledged sequel was published that focused on Caesar’s conquest of Gaul. Since it was released fairly soon after Rome 2: Total War, I didn’t have much of an interest in the game and, feeling also that I should really give the first instalment in the series a fair shake, I never bothered picking it up.

Then, in August 2015, the second sequel was released: Hegemony III: Clash of the Ancients. The game focuses on the Italian peninsula prior to the rise of Rome as a superpower. You pick a particular settlement to start with, which belongs to a particular cultural faction (i.e. Greek, Italic, Etruscan, or Celtic), and then have to try and conquer a large part of the map, fulfilling objectives along the way to achieve victory.

This latest instalment is still being actively developed and updated. A large patch (version 3.1) was released in February, with another to be published soon that will add even more to the game, including territories that will make managing everything a lot easier. There are also plans for a DLC expansion. In short, I figured this would be a good time to delve into Hegemony III and tell you something about my (early!) experiences with the game.

Clash of the Ancients

So what is Hegemony III exactly? It’s a real-time strategy game played on a grand scale, but quite different from the ‘grand strategy’ games published by Paradox Entertainment (like Europa Universalis). I find the Paradox games impenetrable and far too slow for my liking; Hegemony III plays more quickly and its management systems are more streamlined. The Hegemony games in general really emphasize supply lines above all else: you’ll spend a lot of your time building up settlements, populating farms, mines, vineyards, and other ‘resource nodes’ that you then hook up to settlements. The game is all about the flow of resources from the countryside into your cities. 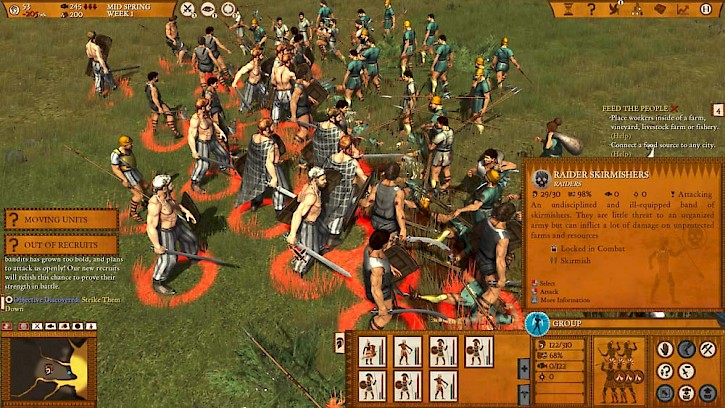 Perhaps the most noteworthy feature of the game is what the developers refer to as ‘seamless zoom’. Everything takes place on the map and you can zoom all the way in to see your troops fighting the enemy. One of the nice touches of the battles is that crows will start circling overhead as armies collide, and once all living participants have left the scene do they come down and start pecking away at the corpses. But you can also zoom all the way out to have a view of the entire world map: from the Alps in the north to Calabria in the south.

The Total War games, in contrast, divide the strategic map from the tactical map, forcing you to sit through loading screens when you switch from the turn-based campaign map to a battle and back. In Hegemony, everything is seamless, meaning that once you start the game it simply flows onwards from beginning to end. Of course, sometimes you want to have the time to evaluate things or to queue up orders in rapid succession. Like other grand strategy games, you can tap the space bar to pause the game and do just that. It all works perfectly and really allows you to submerse yourself into this ancient world.

The learning curve is quite steep. I’ve restarted a few times because I found it very easy to overspend. To recruit units, you’ll need population, which replenishes slowly. Initially, I was too eager to build up a large army quickly and that simply won’t happen without the necessary lines of supply and some expansion. By training too many units too soon, you can cripple your economy and be in the red before you know it, which has a negative impact on morale and will cause your units to disband. Units that disband outside of a settlement are lost forever, making it even harder to train new units.

My experience has been that, initially at least, you won’t need a large force. In the first stages of the game, you really need to focus on building up your economy. You’ll need food, for sure, but also access to mines and, especially, wood. Wood is used to upgrade your settlements and your resource nodes, and I found that not having access to any wood also cripples your economy more quickly than you can chop down a tree. 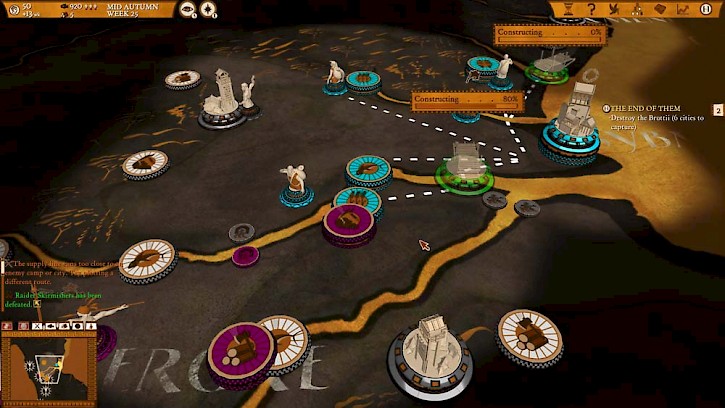 As you may have noticed, Hegemony III is, in essence, very similar to most real-time strategy games: the economy is the engine that drives the game. Managing it is fortunately easy. You populate resource nodes (farms, vineyards, and so on) using slaves or labourers, and then connect the nodes to your cities by first left-clicking the node and then right-clicking the destination. If you hover over the supply line, it will light up in yellow, and ox-carts will move to and from the cities as long as they are active.

The system is simply, but intuitive. It also allows for realistic raiding tactics. More than once I’ve had rival settlements send out a small group of skirmishers to raid a farm or other building, necessitating me to send out troops of my own to stop them. All-out pitched battles seem so far to be as relatively rare as they must have been in reality: most battles are relatively small-scale and are limited to raids and what we might call border skirmishes, where an enemy sends a small force across your borders that you then repel.

Cities themselves grow steadily, provided you have the resources. When a city can be upgraded, you receive a notification in the bar along the top edge of the screen, where all important messages conveniently slide in. You can always check the progress of a city by clicking it and selecting the upgrade tab: the outline of an amphora is slowly filled over time and once full you can click it to start expanding the city (which, of course, costs wood).

The game seems overwhelming, but most of the individual systems are actually fairly straightforward. There’s also an extensive in-game manual available, which is a great help. To win, you need to acrue 10 victory points. Victory points are gained by completing certain objectives, or by investing heavily in culture, your military (split in land-based and naval), or trade. Learning the game and moving towards victory is made easier by the game handing out smaller objectives for you to complete along the way, such as training a few scouts, capturing a farm, subjugating a rival settlement, or engaging in some diplomacy. 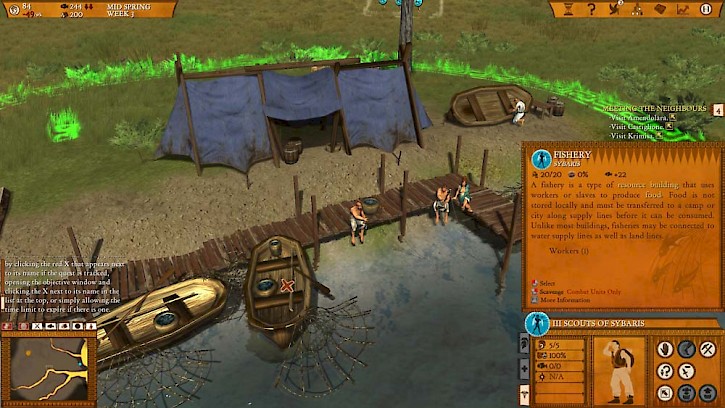 There’s lots more about the game that I haven’t gone into yet, including the diplomacy system, the faction skills (i.e. ‘levelling up’ allows you to customize your particular faction), and naval combat. But truth be told I haven’t really explored everything that the game has to offer yet. It’s grand, deep, and satisfying, and I will certainly be playing the game further and exploring more of what it has to offer. I’m also looking forward to the coming updates, which will change the game in some quite fundamental ways.

Perhaps I should add something about the game’s presentation. Visually, it’s certainly not as slick as something like Total War: Rome 2. There are no fancy graphical effects, yet the game certainly does look appealing, if perhaps a little washed out. The models used in the game are all nicely detailed, and unlike Rome 2, the hoplites in this game actually have Argive shields with a proper double grip! The sounds are all serviceable and the music, which sort of fades into the background, seems to fit well with the period.

All in all, I’ve really enjoyed my time with Hegemony III and look forward to spending more time with the game. In fact, I’m hoping to make you, the reader, part of my gaming experiences. In September, I intend to start doing some game diaries. This means that I will play a campaign in a strategy game from start to finish, writing about my experiences here on the blog in weekly updates (or perhaps even more frequently).

Aside from writing about what I did in the game, like a regular after action report (AAR), I will also comment on the game from a historical and archaeological point of view. I’ve done something similar not too long ago for the action game Far Cry: Primal on my personal website. I will most likely start with Rome 2: Total War, since that game is no longer getting any updates and I’ve spent more time with it than with Hegemony. However, I’ll be continuing to hone my skills in the latter game and, once I’m done with Rome 2, I’ll do a playthrough of Hegemony III that I’ll also post about here. So I hope that’s something for you to look forward to.

In the meantime, I highly recommend you try Hegemony III: Clash of the Ancients for yourself. It’s an ambitious game with a unique focus (supply lines), combining economic management with a detailed wargame, set in a well-realized ancient world. It would be a shame if you, like me, waited too long before taking the plunge.