Just when you thought movies about Heracles couldn’t get much worse than The Legend of Hercules, along comes Hercules Reborn.

This movie was made and released by The Asylum, a studio known for churning out low-budget movies.Hercules Reborn is an example of one of their so-called “mockbusters”, a movie made to cash in on a major Hollywood release (hopefully an actual blockbuster). The Asylum were fortunate this year with the release of not one, but two different Hercules movies. The casting of WWE’s John Hennigan, better known as John Morrison, shows that the producers of this flic mainly wished to ride the coattails of Dwayne “The Rock” Johnson’s ancient Greek swords-and-sandals epic.

Needless to say, Hercules Reborn is a disaster of a movie. The opening caption tells us that the first scene is set in “13 BC, Greece”. What follows is a brief sequence in which Hercules (John Hennigan), turned mad after having been administered a potion by a mysterious figure, kills his wife Megara and their three children. We then cut to the “Kingdom of Enos” (whatever that is), ten years later. The landscape looks nothing like Greece, with its sandy desert, and the town looks like a Roman or medieval fort.

It is in Enos that we are introduced to the movie’s main characters: our heroes Arias Doudounakis (played by earnest Christian Oliver) and Horace (portrayed by the laughably bad James Duval), as well as movie-villain “General Nikos” (played by the talentless Dylan Vox). In case it wasn’t obvious: the names have nothing to do with ancient Greece. Arias is made up, as far as I can tell, and the surname Doudounakis, like the first name Nikos, do not belong in ancient Greece. Horace is a Roman name. In fact, as with The Legend of Hercules, there is much here that is Roman, from the names to the costumes, including the ridiculously plastic-looking armour, swords, and helmets. A slave even refers to Nikos at some point as dominus!

Nikos is treated with contempt by Horace, who complains that the general was an aristocrat that never knew any hardship. Interestingly, Nikos later tells that he knows what it’s like to have nothing and go hungry, so this seems like a strange remark. It is even stranger for the fact that we soon afterwards discover that Horace’s friend Arias is in a relationship with Theodora (Christina Ulfsparre), the daughter of the king and queen of Enos! 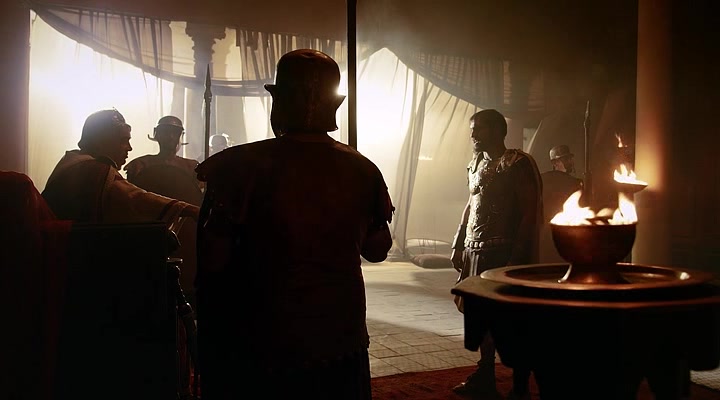 Nikos is portrayed as a warmongering and greedy villain with no redeeming qualities whatsoever. When the king and queen refuse to conquer a village that is rich in gold, Nikos decides to take matters into his own hand. He leads his army into the town and slaughters the royal couple. Theodora is taken prisoner. Arias, Horace, and a few others decided to escape the town and look for a man called Hercules, who most believe is only a legend.

Somehow, they know that Hercules lives “over the mountain”, in a place called “Sagev”, another completely made-up name. (Update: ever observant, Roel Konijnendijk points out that it’s “Vegas” in reverse.) They enter the town and Hercules is sitting at a table, drinking, in the very first tavern they come to. Arias says that they are looking for Hercules, at which point every drunkard gets up and proclaims that he is Hercules, in a manner that is undoubtedly intended to recall the famous “I am Spartacus!” sequence from Kubrick’s masterpiece, but completely missing the point of that particular scene.

The men leave and immediately run into Hercules again, who got thrown out of the tavern for not settling his bills. He vomits and belches, and Arias and his party leave him where he is, not believing that he is actually Hercules. When they are later seized by men sent by Nikos, Hercules comes to their rescue in a dazzling display of low-budget slaughter that at least has the advantage of not being as anemic as The Legend of Hercules was. Hercules then decides to join Arias and his men “for his own reasons”: the reason being, as would be revealed later (as if it was some sort of big mystery), that Nikos was the one responsible behind the madness that caused the hero to slaughter his own family. 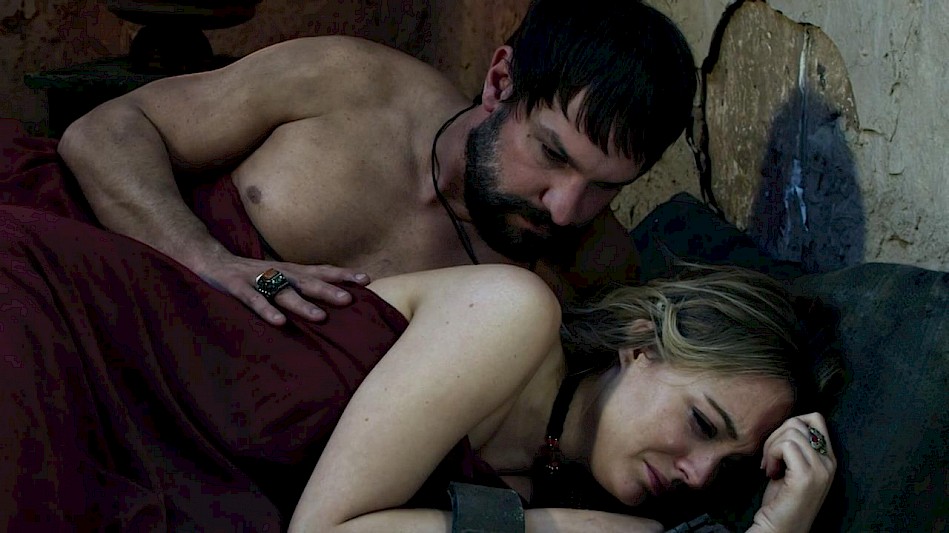 There are some events that happen on our way to the credits, most of which don’t need to be recounted in great detail. What struck me most is how nasty the movie can get. Nikos is portrayed as a monster, ordering the slaughter of a woman and her young son (called Erasmus!), as well as almost casually raping Theodora. Generally in stories of his kind, the mere threat of random acts of violence as well as the threat of rape usually work better than actually having the villain kill children and rape women. Similarly, Hercules is later recaptured and again poisoned; in his madness, he kills a few friendlies. Sequences like these may have been intended to give the movie an edge, but they merely make it unpleasant.

Eventually, there is a largish battle at the end where, after quite some time, Arias is nearly killed by Nikos, only to be saved by Theodora, with Hercules wandering into the room at the right moment to squeeze Nikos’ head until he dies (those expecting something as impressive as the skull-crushing scene in last season’s Game of Thrones will be sorely disappointed). Arias miraculously recovers from a grievous wound that he received when Nikos stabbed him in the side and goes off to marry Theodora. Together, they then rule as the new king and queen of Enos and Hercules gets to ride off into the sunset.

Based on the trailer alone, I knew that I wasn’t going to be seeing a masterpiece by any stretch of the imagination. Bad costumes, bad acting, and bad direction were all expected (the cinematography wasn’t bad, though). But for an Asylum movie, and at the risk of repeating what I said in my review of The Legend of Hercules, this was remarkably joyless. There’s little point to getting into the many errors, starting with the setting of the movie, but for a film about Hercules I was actually surprised how unimportant the character was to the overall proceedings. When the story doesn’t really need the title character, you have a serious problem. This was a movie about a group of men rebelling against a tyrant and eventually overthrowing him. Hercules was almost entirely surplus to requirements. 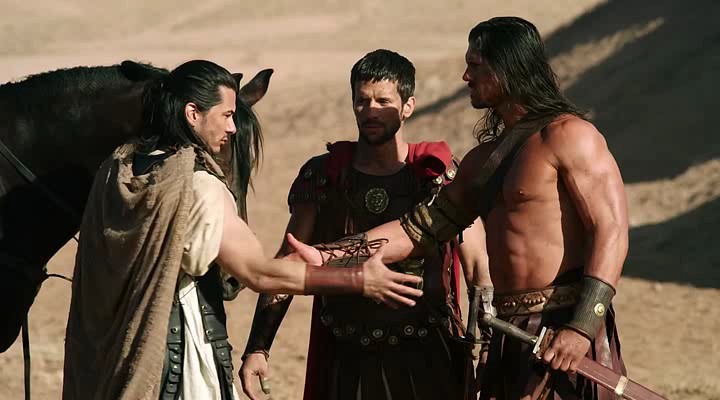 The only nod to the original myths was the fact that Hercules slaughtered his family. But again, the filmmakers decided not to include the gods. It wasn’t the goddess Hera that made Hercules made, but a potion concocted by a “shaman” of “Hara” (I assume the marble-mouthed Dylan Vox meant “Hera”). Hercules is frequently referred to as a “half-god”, but there is no evidence that this is actually the case. There is no reference to his Twelve Labours, nor to any other characters from the original stories, such as Iolaus.

Why make a movie about Hercules if you have no intention to do anything with the original stories? Why not make a generic fantasy movie instead? (The answer, of course, is that Hercules has name-recognition and that people are more likely to go watch something that seems familiar than to watch something new and original.) Hercules or, rather, Heracles is renowned for his slaying of monsters and other fabulous beasts. He cries out for a movie made in the style of Ray Harryhausen’s Clash of the Titans. We don’t need Hercules to be humanized: to do so is to completely ignore what makes him and his stories special in the first place.

In any event, don’t bother seeing Hercules Reborn. It’s a bad movie, and not even a movie bad enough to be funny to watch with friends (or while drunk). It lacks humour and is, at times, downright vile. If you want to have at least a modicum of fun while watching a bad movie about Hercules, go see, if you must, Arnold Schwarzenegger’s Hercules in New York (1969) instead.