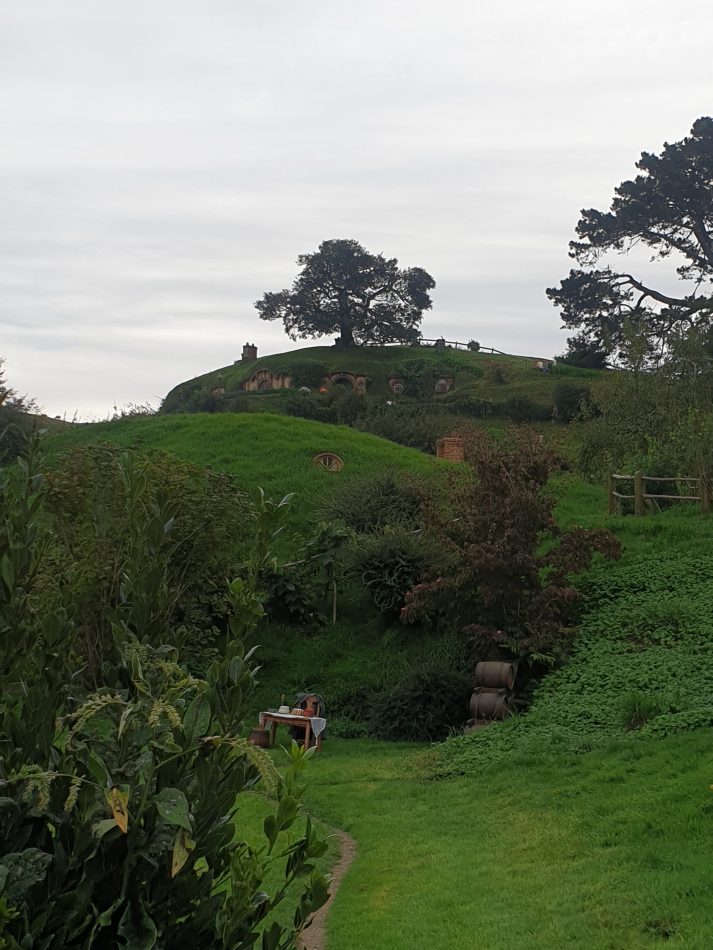 Recently, my family were able to return to visit family for the first time in several years after the travel restrictions due to the Covid19 pandemic to New Zealand were eased. Some of the cousins had doubled in height (and age) since we were last able to see them in person, so it was a welcome (and emotional) catch up. At the same time, my wife realised that we should try and include a couple of holiday activities which were not relative-catch-up related. So, after visiting my 85 year-old aunt in Hamilton, we decided to venture forth to Hobbiton – the movie set of the Hobbit village from The Lord of the Rings and The Hobbit trilogies located in Matamata, New Zealand.

And there, gentle reader, my brain had another epiphany about ancient warfare. 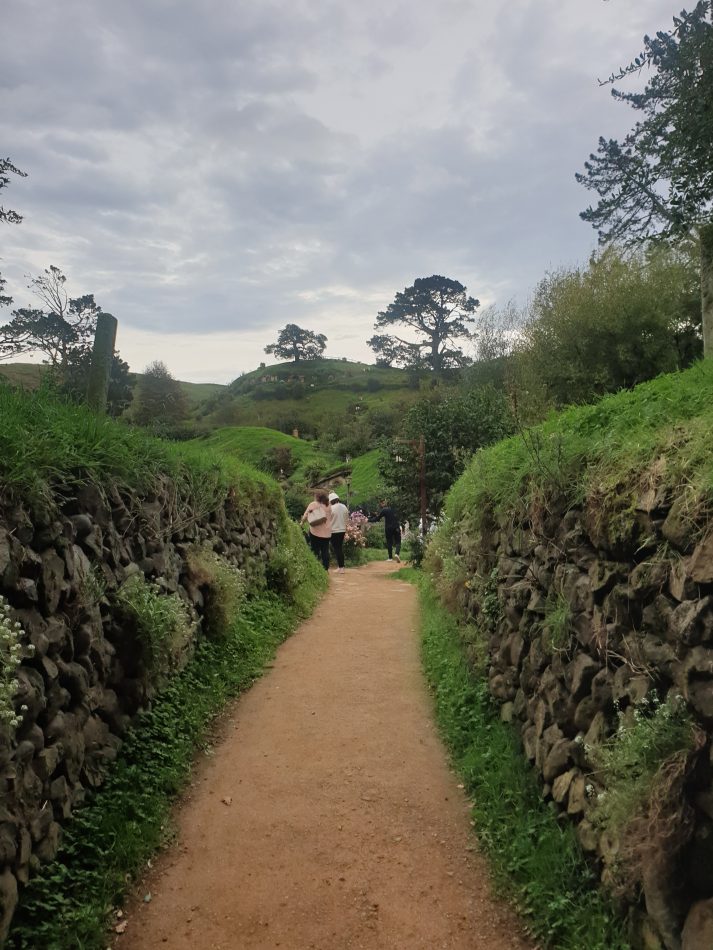 I have written about such things before – in central Australia, in northern Minnesota, on a beach on Australia’s east coast. In those locations I have had insights (well, to me at least) of the Huns and of the battle of Sphacteria, even the mouse plague. This epiphany was more general, however, but no less impactful for that.

The farm (still run by the Alexander family) was ‘spotted’ as a location for The Lord of the Rings films in 1998 and, from March 1999, eleven months were spent building Hobbiton for filming during The Lord of the Rings trilogy in a three month period from December 1999 to March 2000. After that, the set was removed although white plywood boards were left in place (with circular doors marked on them) to show where Hobbiton had been. Even then the site attracted some dedicated visitors (and the The Lord of the Rings site seeing (or is that sightseeing - or even site sightseeing) industry began) run under Hobbiton Movie Set Tours.

When the decision was made to return to the same location for The Hobbit films in 2009, it was also decided that Hobbiton should be built in permanent fashion, and this is the site which remains today with forty-four Hobbit hole exteriors (some, such as Bag End have a corridor behind the door, but most are just exteriors). The interiors of the Hobbit holes were filmed on interior sets in Wellington. Nonetheless there is obvious exquisite and painstaking detail which has gone into the creation every hole. The build this second time around took eighteen months (and the Hobbit holes had to all be built to New Zealand building standards). The site has been managed and maintained by a dedicated team ever since (the vegetable plots and orchards still bear fruit and vegetables to give an added authenticity). Owing to changes to the shooting schedule of the films, however, the set was only utilised for twelve days of shooting in October 2011. 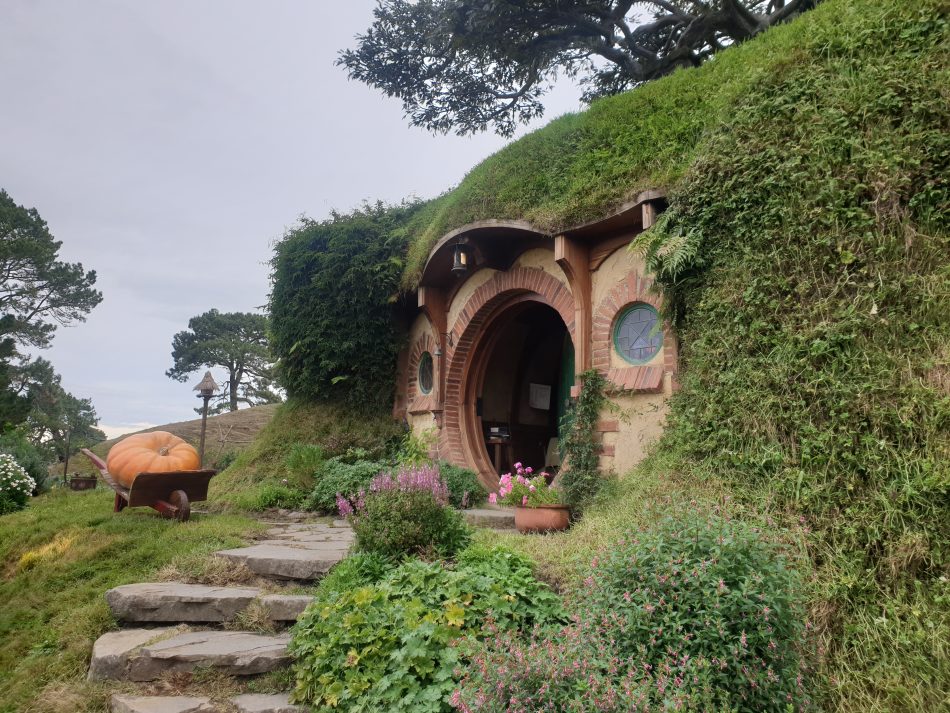 Although this is a film set, and there are no doubt other film sets around the world which are preserved in similar fashion, it was, once again, an exercise in evocation walking around the site of a world with which I was familiar. We were also fortunate that the site was open – the Covid19 Pandemic in New Zealand was still on a Red Traffic Light setting when we went which restricted numbers permitted (and masks were required in indoor settings). You can see that my photos are not over-populated with other tourists. At its height in 2019 (and numbers had not yet plateaued), 650,000 visitors a year made their way to Hobbiton and the site employed 300 staff. Overnight in 2020 that staff was cut to 22 and visitors reduced to zero. A gradual reopening has meant staff numbers are now back up to 50 and (mostly domestic) visitors can visit the site. We had the place virtually to ourselves – ours was the only party (of sixteen) accompanied by fabulous tour guide, Izzy. 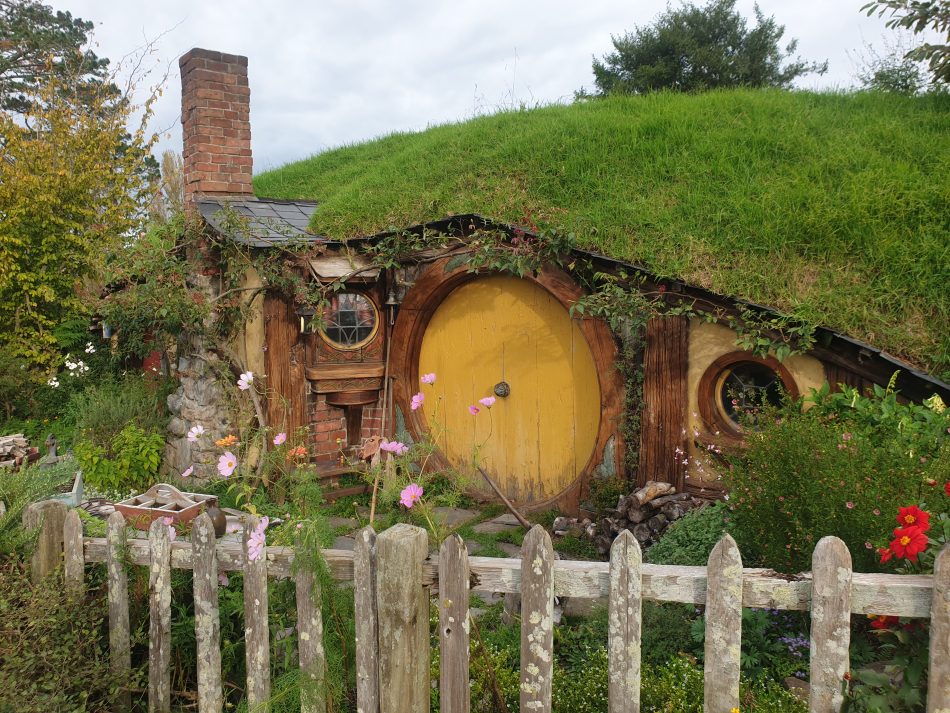 So how does walking around a film set and having books and movies evoked at every turn relate to ancient warfare? Australia and New Zealand are as far away from the sites of ancient warfare as one can get. There are battle sites here, but most date to the nineteenth century and are, like most of the world’s battle sites, fields that are not especially curated. The battlefields of New Zealand, where they survive, are usually the 'lumps and bumps' in the ground. The Hobbiton set was preserved as it was seen in the movies and, as such, evoked that world complete - only the Hobbits themselves were missing (dare I say that my wife and daughters are 5’2 so, we were informed, would have been cast as Hobbits – 5’2 was the maximum height allowed – so yes there were photos of them fitting under Hobbit-hole doors without needing to duck – but I have been banned from sharing them - there are some to-scale hobbit-sized people in the background of one of the photos here though). You could stand where the actors stood, say lines of dialogue where they said them, look on the view they would have seen.

When I did visit ancient and medieval battlefields in Europe (I have mentioned the battlefield of Maldon before, but I also got to Hastings, Thermopylae, Delphi, Culloden, the Battle of the Standard, and several others), many are just the field (sometimes without even an information panel) and you, the visitor, must reconstruct how the battle unfolded in your mind’s eye – ‘walking the field’ as they call it. Many battlefields remain on private land and so walking the field is sometimes impossible without gaining permission. If you are familiar enough with the source material this reconstruction can indeed be done (just like Heinrich Schliemann did at Troy/Hisarlik, Turkey, reciting his Homer in 1873) but in many cases of ancient warfare, we either do not have enough detail, the site of the actual battle is debated, or both. In some cases, a meticulous reconstruction of the battle can be made but it might be making perfect sense of the wrong place.

What Hobbiton provided, however, was the actual site and you knew where actual events (albeit from a series of films) took place. In my battlefield experience, there are a few similar places – such as the ‘last stand hill’ at Thermopylae (although there is debate there too – even the Phocaean Wall there is debated), at Maldon, the tidal causeway (although again the site of the battle was for a long time argued to have taken place elsewhere and reconstructions argued strongly for that location fitting the poem). Battlefields like Marathon and Leuctra had the soros funeral mounds and tropaion monument respectively although how those relate to the topography of the actual battle fought nearby are still matters of debate. So too with the battle of Chaeronea with the Lion of Chaeronea and the funeral soros of the Macedonians (the locations of those two monuments there, I believe, hampers understanding of the battle rather than aids it).

Many more modern battlefields have been built over or rebuilt so that you may indeed be standing on the same ground where the battle was fought but it no longer looks (or feels) the same. The giant Lion monument at Waterloo for instance rather alters how the battlefield looked. Where sections of the trenches of WWI are preserved, or the forts of WWII, the battle can be reimagined in greater detail (although museum exhibits which reproduce the conditions in those places are essential to see how the 'lumps and bumps' or aging concrete may have appeared.

Again, at Hobbiton, not only was it the same ground, it absolutely looked and felt the same as was seen on screen - it was a visceral experience. I remember the excitement in the build up to the film Gettysburg in 1993, that the many American Civil War reenactors used as extras were allowed on to the actual battlefield of Gettysburg to act as extras in the filming of the battle’s key moments. Having the actual field as the backdrop to the battle with re-enactors in ‘as accurate as possible’ equipment still holds a special place in my memory, regardless of the controversies of the film and battle and regardless of the opinions on the quality of the film. Reenactors of various periods have been allowed on actual battlefields on many occasions (but this film allowed many more people to see it). 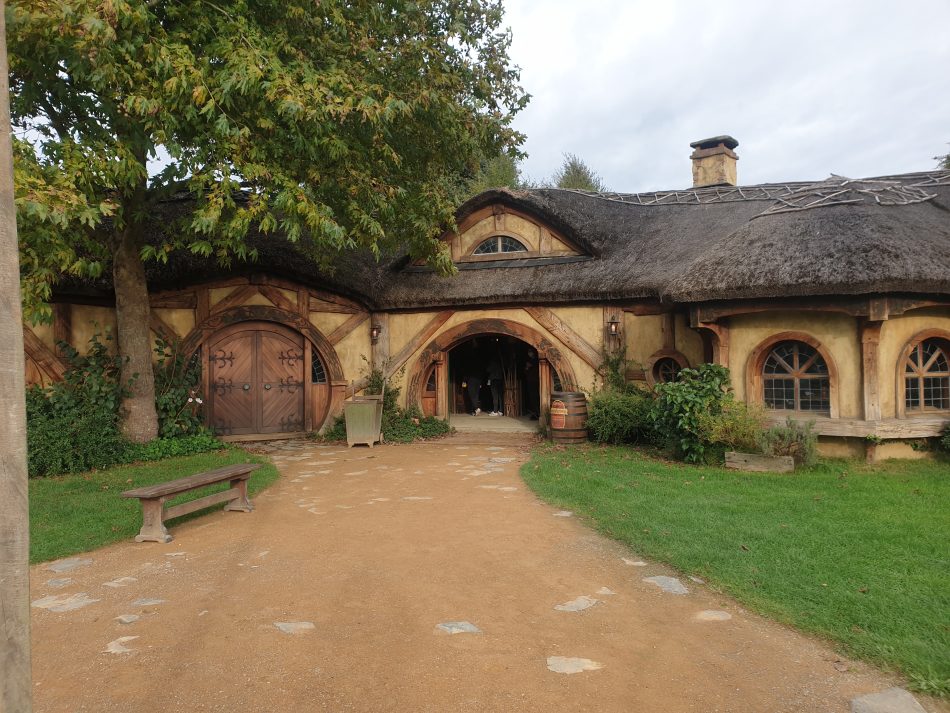 Later this year (2022), an expedition to Plataea by dedicated reenactors will commemorate the 2,500th anniversary of the battle of 479 BC (there were indeed celebrations last year, but I do not want to enter into the ‘is it 2021 or 2022’ debate). This will be a combination of what I am talking about here – a battle field which is generally uncurated, where there has been a minimum of modern (re)building, where what exactly happened in the battle is not 100% clear and still debated but where, in July/August this year, hoplite reenactors will gather to populate the battlefield and it will look, as much as is possible 2,500 year later, like parts of the field may have looked 2,500 years ago. Like the Hobbiton movie set, it will look ‘as close to accurate as possible’ when Greek hoplites from several city states faced the might of Persia and it will evoke what that particular battlefield (or parts thereof) may have looked like; they might even utter a phrase or two in (ancient) Greek to complete the picture, just like Bilbo's "I'm going on an adventure" in The Hobbit (which may, or may not, have been uttered by the author on the site where the line was filmed). 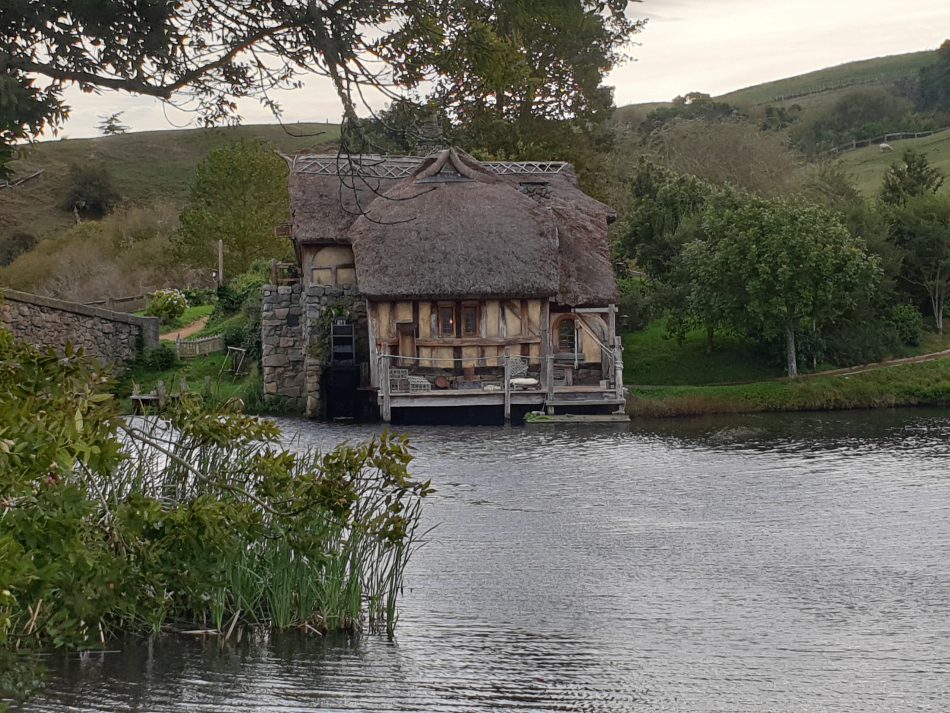