Christmas is only a few weeks away. Perhaps you want to get a few good ideas on what to give to someone who is interested in Ancient Warfare magazine or, more generally, the ancient world. If so, you’re in luck, as I’ll be giving some tips in this blog post. (I asked for some advice on this matter on my personal Facebook page and I thank those who have responded.)

First of all, I guess you won’t mind if I use this space to briefly point out some products from Karwansaray Publishers that would make good gifts. Don’t worry, you can skip this paragraph and the next if you dislike any form of explicit capitalism. But I think that even if I didn’t work here, I’d still recommend people get a subscription to Ancient Warfare magazine. The subscription starter package makes for a pretty good gift idea at a reasonable price. 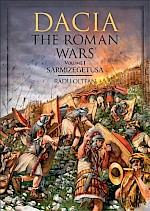 Likewise, I’d suggest you check out the second edition of Radu Oltean’s beautiful book on the Dacian Wars that we published recently. Jona Lendering and Arjen Bosman’s Edge of Empire also hasn’t sold out yet, so you may want to grab a copy if you are at all interested in life in the Low Countries back when it was a part of the Roman Empire. My own Henchmen of Ares is for anyone who’s interested in ancient Greek warfare, from the Mycenaean Bronze Age down to the Persian Wars. Both of these also have more than a hundred illustrations, including reconstructions by Ancient Warfare stalwarts like Graham Sumner, Johnny Shumate, and Angel García Pinto.

This past year saw the publication of a number of really good books on ancient history. Eric Cline’s 1177 BC: The Year Civilization Collapsed has been favourably reviewed and offers a great and easy-to-read overview of the end of the Bronze Age. You can check out the author’s website, visit the page about the book over at Princeton University Press’s website, or order it directly from Amazon (and no, we’re not using an affiliate scheme). 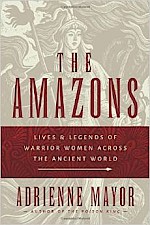 Princeton University Press also published Adrienne Mayor’s The Amazons: Lives and Legends of Warrior Women Across the World, another excellent read. Mayor discusses the mythology surrounding the Amazons and also looks for historical analogues and sources of inspiration. It is the most detailed treatment ever to have appeared on the Amazons. Visit the page at the publisher’s website or order it directly from Amazon.

Lindsay Powell, regular contributor to Ancient Warfare magazine, wrote Germanicus: The Magnificent Life and Mysterious Death of Rome’s Most Popular General. Technically, it appeared late last year, but that doesn’t mean it wouldn’t still make for a good gift for someone interested in Late Republican or Early Imperial Rome. You can check out the author’s website, visit the relevant page on publisher Pen and Sword’s website, or order it directly from Amazon.

Those who are able to read Dutch may well be interested in Jona Lendering’s recent book on early Judaism, called Israël verdeeld (i.e. Israel Divided). I conducted a brief interview with Jona about the book a while ago. The first run of the book has already sold out, but the second edition, with some minor corrections, is set to appear any day now. You can check out the author’s website or order it directly from this Dutch webshop.

Many fictional treatments of the ancient world are published every year. Fiction is an excellent kind of “gateway drug” to nonfiction and it is certainly no coincidence that we frequently have reviews of new novels in Ancient Warfare magazine. If you know someone who always wanted to publish a piece of historical fiction, you can point out that we’re now running a short story competition, with the winning piece getting published in the fiftieth issue of Ancient Warfare, IX.4 (on the First Punic War).

The competition will be judged by some of the finest writers of historical fiction and you would probably get good gift ideas by just visiting their websites and browsing their impressive bibliographies. The panel consists of Christian Cameron, Ben Kane, Anthony Riches, and Harry Sidebottom.

Regular contributor Joe Hall also suggested that you check out the first two books of a new trilogy on the career of Cicero written by Robert Harris: Imperium and Lustrum. These are political thrillers set in Roman times. You can check out the author’s website or order the books directly via Amazon.

David L. Reinke suggests that, for younger readers, the books by Vicky Alvear Shecter would make ideal holiday gifts, especially Anubis Speaks: A Guide to the Afterlife by the Egyptian God of the Dead and Hades Speaks: A Guide to the Underworld by the Greek God of the Dead. The books introduce the topics of ancient gods and afterlives in a humorous, accessible way. You can check out the author’s website or order the books from Amazon.

If you were around for my Summer of Hercules, then obviously I would recommend you check out the late Steve Moore’s graphic novels Hercules: The Thracian Wars and Hercules: The Knives of Kush. (And yes, let’s sneak in Emma Stafford’s monograph on the mighty Greek hero, too.) You can check out the publisher’s website or order The Thracian Wars or Knives of Kush directly from Amazon. 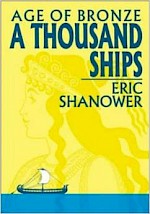 Jasper Oorthuys has reminded me that Eric Shanower’s Age of Bronze is really good and that I actually haven’t devoted a lot of space to that series on this blog – something that I really need to rectify soon. Age of Bronze is an ongoing series, rendered in beautiful black and white, in which Shanower tries to mix all available material on the Trojan War, from Homer to Shakespeare, into a coherent story set during the Late Bronze Age. It looks beautiful and reads really well; I thoroughly recommend it. You can visit the official website, the author’s website, the publisher’s website, or you can order the books directly from Amazon.

Next, Matthew Lloyd reminded me that I should really read Three, written by Kieron Gillen, with artwork by Ryan Kelly. The book is a response to Frank Miller’s more famous 300, but instead focuses on three helots that are fleeing for their lives, while pursued by their Spartan masters. You can check out the publisher’s website, visit Kieron Gillen’s website, or order the book directly from Amazon.

Not a lot of games have appeared that will appeal directly to those interested primarily in the ancient world. Our own Leo de Voogd suggests Total War: Rome 2, which has been receiving a steady stream of patches and other improvements since its rather poor launch and has shaped up to be quite a good game, even if I think it still falls a little short from the greatness achieved by the Creative Assembly in Shogun 2. You can order the brand new “Emperor Edition” of the game over at Steam or acquire a disc version through Amazon. The game frequently goes on offer, so don’t buy it at full price.

I think this list should be a good starting point as regards gift ideas for this coming Christmas. If you think there’s anything that I’ve missed that really ought to have been included, feel free to sound off in the comments, below!