How to be a Hollywood Roman

A warning from The Powers That Be: our editor just may have watched too many ‘ancient-themed’ movies and TV-shows recently. Rant mode on.

So, you wanna be a Roman like you’ve seen in the movies? You’ve come to the right place! I’ll be offering this guide here for anyone who wants to do more than just watch movies about the ancient world. What’s that I hear? You might also want to know what it takes to transform yourself into one of those ancient Greek guys? Well, no worries. With a few minor tweaks, you can make some subtle adjustments. If I’m totally honest here, this is basically a guide to turning yourself into generic movie-inspired ancient person.

Oh, sorry, did I write ‘person’? I meant ‘man’, of course. If you happen to be of the female pursuasion – or want to dress up like one – the rules are much simpler. Just get yourself some exotic-looking jewellery, like a gold band for your upper arm, do up your hair nice, and hoist yourself into one of those long, flowing dresses. You can probably cut a sheet to size. You get extra points – because why not? – if it’s some exotic colour, like purple. Yes, in real life purple wasn’t used by every Tom, Dick, and Harriet, but who cares? It’s not like facts should get in the way of turning yourself into a proper woman of the ancient world.

Put on some pants

But since the ancient world was clearly dominated by men – the visual evidence created by Hollywood speaks for itself! – I’ll be spending the rest of this blog post to explain how to make yourself look and behave like one of those blokes you’ve seen in Gladiator or Ben-Hur, or on Starz’s Spartacus or HBO’s Rome or pretty much anything else that’s getting released on the small or big screen and is set in ancient Rome. There’s a lot of those around and it’s perfect! ‘Research’ doesn’t require reading any stuffy old books – just plonk yourself on the couch, head to Netflix, and Bobbius Maximus’s your uncle.

First order of business – no trousers or, if you happen to be from across the pond, ‘pants’. Sorry. Except well, maybe not. If you really want your trousers – pants, sorry – you can probably wear them if you decide to be a soldier. And who wouldn’t want to be a soldier, right? Just look at Pullo and Vorenus here, our friends from HBO’s Rome (and yes, I have to write ‘HBO’s Rome’ every time instead of just ‘Rome’ or I might get confused), and how happy and manly they look: 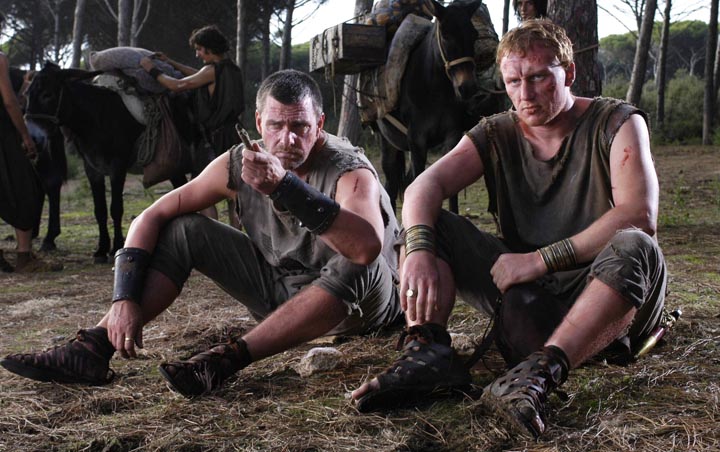 So yeah, you can wear trousers if you want to dress up like a Roman soldier. It doesn’t matter that in real life, Roman legionaries only wore trousers when they were in the north of Italy or even further north. Wear them whenever you want! Wear them with pride!

Now, as regards some kind of shirt – you’ve probably heard of the Roman tunic, right? It’s a rectangular piece of cloth with some holes for your arms. And your head, too (kinda important, that one). Here, just look again at that picture of Pullo and Vorenus. They’re wearing the sleeveless variety, but you can also attach some sleeves to them, either long or short. Again, long only makes sense in a cooler climate, really, but who cares about that. As long as you think it makes you look cool, you can wear whatever the Hades you want.

Unfortunately, the clothes worn by our heroes in the photo above are absolutely drab. Sure, those colours are fairly realistic, but let’s face it: realism is for losers. And we’re winners, after all. So let’s get rid of those drab clothes. Switch them for something more colourful, like red or something. You can also add some acessories, like a cloak of some kind. Make that blue. That’s a cool colour. Literally. (I can keep this up for hours – no, really, you don’t want to challenge me.) Add some ancient-looking pins, like the fibulae that archaeologists have dug up, or just use a modern safety pin because who can be bothered, right?

A simple tunic will suffice for most of your needs. But there’s another item of clothing that you can, quite literally, drape around yourself: the amazingly cool Roman toga! Here are some Roman togas worn by senators in Gladiator: 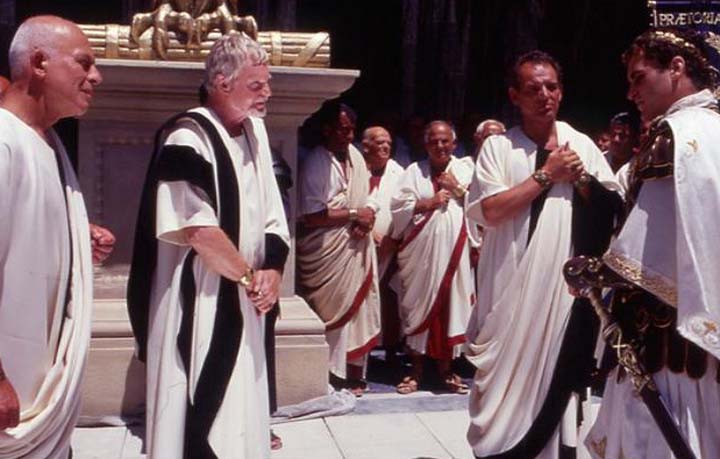 The strips along the edges probably had some sort of significance, but who wants to open up a book and look it up? Not me, and probably not you either. If most movie and television productions can get away with not delving into the books, we can too.

If you want to go all out as far as military dress is concerned, you’ve got to get yourself some lorica segmentata. That’s right, dear reader: those shiny plates are awesome! Yes, yes, I know they were introduced during the reign of Augustus and disappeared during the later Empire, but just wear them regardless of what stupid period you’re supposed to live. And hey, if you want to do something different, go for the lorica hamata! After all, nothing says historical accuracy like chainmail.

But hold it right there! Maybe you don’t want to be a rank-and-file soldier? In that case, moulded leather cuirasses to the rescue! Yes, yes, there’s absolutely zero evidence for these cuirasses, which were almost certainly made of metal (like bronze or iron), but who cares. Leather cuirasses make you look fab without having to engage in any gruelling physical exercise because who has the time? Here’s Glaber from Spartacus sporting a leather cuirass: 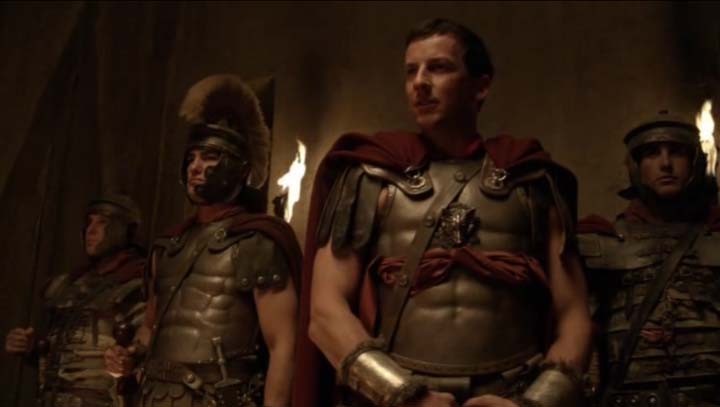 You’ll probably want to put some sort of helmet on your noggin. The ones with the ear guards and the crest, worn by the geezer to Glaber’s right, look like they might fit the bill. No doubt there’s some sort of development in helmets over the course of the Republican and Imperial periods, but all that matters is that it looks suitably ancient. And let’s be fair: you haven’t seen any modern soldiers run around with helmets like that, right? QED, as the Romans would say.

As far as weapons are concerned, it’s fairly simple. Those Romans used spears. Sure, a pilum would be nice, with a bendy metal shaft and all, but if you don’t have any of those around, years of watching movies have taught me that any regular old spear will do just fine, historical accuracy be damned! Swords are even easier since the Romans apparently only ever used one type: the mighty gladius. It’s short and it’s basically leaf-shaped and you can’t go wrong, really. Has a nice handle, too. Here’s Russell Crowe with something that vaguely looks like it might be on the money: 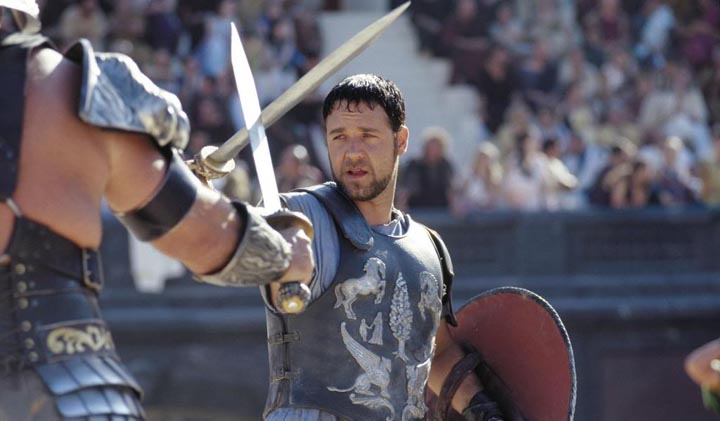 Now, Roman soldiers liked their weapons and their armour, but they also used something else to protect themselves: shields. Since we obviously want to dress up like legionaries – if we want to be soldiers at all – we’ll need to get one of those rectangular shields for sure. And yes, historically they were made from wood and coloured red, but don’t let that stop your creativity. Don’t worry too much about handles either – as long as you can grab it, it’s fine. Doesn’t matter if the handle should be vertical, horizontal, or whatever.

And now we’ve come to what is perhaps the single most vital piece of clothing for any heroic Roman or, indeed, generic ancient person: bracers! In the ancient world, everybody wore them. And I do mean everybody. At least, if movies and television are to be believed and why would they lie to us? Sure, there’s no archaeological proof for the existence of bracers, but proof is overrated anyway.

Okay, so you’re dressed like a Roman. Now what? Well, go do some Roman things! If you want to pretend to be a lowly plebe, make sure you worry a lot about your business and your wife’s fidelity for no reason. Furrow that brow! If you’re among the upper echelons of society, clearly your days should be spent getting drunk, abusing your slaves, and dabbling in politics. Talk about the Senate a lot, but try to spend as little time there as possible unless something exciting happens, like a stabbing. In that case, be sure to make your presence felt and do your bit for the glory of Rome if necessary.

If you find yourself in a situation where there’s a clear underdog, be careful! Sure, you may have burnt that village down and killed all of the inhabitants, but there’s usually at least one pesky survivor who’ll come back to haunt you. Furthermore, be especially careful if you go to the arena and there’s a guy you sold off as a slave and is now fighting as a gladiator. Chances are, he’s probably got an axe to grind with you for whatever reason and nothing says ‘axe ground’ like a gladius jammed into your carotid artery in slow motion. And those charioteers aren’t much better either in my experience. Best to surround yourself with some Praetorians – they can be easily recognized by their fancy black armour, apparently.

In any event, once you start dressing up like a Roman, others in your neighbourhood might start to do so, too! (Except in those cases where all they do is look at you strangely and/or call the police. In that case, pull up your toga and run as fast as you can.) Anyway, should you run into a like-minded soul, there is but one greeting that will suffice, as demonstrated by countless movies and TV shows: the manly Roman forearm shake. Here’s an animated GIF based on a scene from Spartacus:

The bloodspatter is optional, but even without that it sure doesn’t get any more manly than that! Of course, there is no evidence that the Romans – or anyone, really – ever used the forearm shake, no matter how manly it looks. But since when did something silly like evidence ever cramp our style? Grab those arms, boys! You’ll never want to go back to the wimpy regular handshake.

So there you have it. From zero to Roman hero in about 1700 words. You’re very welcome. Now, go burn down a few barbarian villages, slap your slave, and eat some grapes.