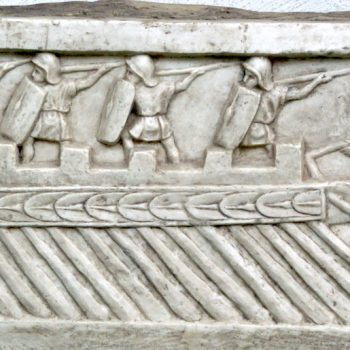 Frieze of a Dorian column showing a warship with marines on deck. Probably first century AD, from Rome.

Names of Roman auxiliary units come in a few varieties. Tribal chiefs (e.g. the famous Ala Indiana - the cavalry regiment of Indus) are popular early in the Principate. A people or a region (such as the Cohortes Batavorum, the Cohorts of Batavians) is very common as well. Sometimes the name is specified by a battlefield role, such as a cohors sagittariorum, "regiment of archers". An odd duck among that last group is an infantry regiment that has, apparently, a naval origin: the Cohors Nauticorum.

Fleet on the Riviera

After the Battle of Actium, a selection of ships "with strong crews" from the fleet of Marc Antony and Cleopatra was moved to Forum Iulii on what is now the French riviera (Tacitus, Annals IV.5). By AD 69 that fleet had disappeared. It is possible it was simply allowed to slowly atrophy away, while the main fleets in Misenum and Ravenna were kept up to strength. Maintaining warships was not cheap and even then, they had a very limited 'top-shelf' lifespan. Or, maybe, there was a better use for its personnel and the ships were no longer necessary.

The Cohors Nauticorum, the regiment of sailors, is known from only six inscriptions, which were all found in Nice, on that same riviera. Some of the names are Celtic, some clearly adopted a proper Roman name (one was born in Forum Iulii!), and some come from the east. It's at least attractive to think that someone named Apolonius Dionysius hailed from the Greek east, and Marius son of Sacer of the Darii might even be Persian (or the inscription has issues, which is not rare, and it's son of Dareus, of the Sacii). It doesn't seem a stretch to think that perhaps supernumerary ship crews were collected together and perhaps used as a local police force, or for logistics tasks in the Alpine campaigns. When they were no longer required, the men were dismissed and the unit dissolved. It certainly doesn't seem to have survived the first century AD.

It may seem odd that former sailors were simply collected into an army unit. Yet there are quite a few examples in the Principate of the fleets being used as 'reservoirs' to bring army units back up to strength. Famously, entire legions were even raised from the fleets in the Year of the Four Emperors. Interestingly, because the naval soldiers in those cases hadn't served their time, they were not citizens. In the case of the two Legiones Adiutrices, that seems to have been arranged 'in bulk' as proven by a series of diplomas. In another case, the former sailors went to the authorities to have their service and citizenship confirmed explicitly. Service guarantees citizenship, but it's good to make sure! It also shows that the difference between the services wasn't as big as we might think.

In a galaxy far far away, or at least long ago, I wrote an article for a conference volume on this and related topics. Your Google-skills may allow you to find this article elsewhere online.