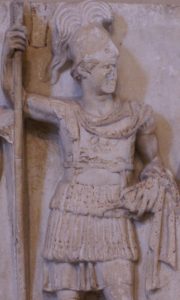 Mars on the Ahenobarbus relief - now in the Louvre, Paris.

For some reason, the Roman Republican era is strongly associated with Roman legionaries wearing Apulo-Corinthian helmets. This is probably due to influential publications such as Duncan Head’s Armies of the Macedonian and Punic Wars or the awesome, grim triarius pictured in John Warry’s Warfare in the Classical World. On the other hand, a likely culprit is the Mars (or officer) figure on the so-called Ahenobarbus relief, who seems to wear an Apulo-Corinthian, or perhaps a straight-up Corinthian, pushed onto the back of his head. Whatever the reason for this widespread image, since these helmets properly belong in the period of Ancient Warfare XI-2, I figured it might be useful to take a more in-depth look at the Apulo-Corinthian helmet. 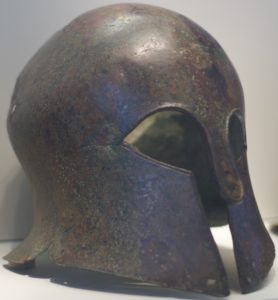 Corinthian helmet from Tarentum, Italy, about 600-550 BC. Now in the Antikensammlung, Berlin.

Undoubtedly the Greek colonists who came to southern Italy brought Corinthian style helmets with them. From there, they were modified into a version that could, in due course, only be worn on top of the head with the nose-guard and eye-holes becoming symbolic. From southeastern (hence Apulo, from Apulia, the heel in the Italian boot) Italy, they spread north from the late 6th century BC. It’s not possible to point out exactly when they fell out of use, however. In a militia-style army where the warrior was responsible for his own kit, the use of equipment inherited from father to son over the generations must have been quite common. 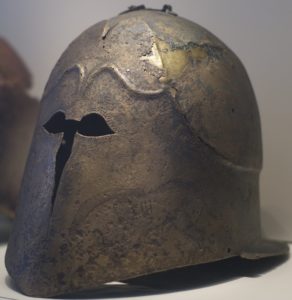 According to Antike Helme about 85 examples of this type of helmet survive. Five subtypes exists, depending on the degree of space between the cheeks, nose-guard and eyes. The final type is entirely closed with only minimal, if any, openings for the eyes remaining. The authors of Antike Helme suggest that may mean the helmets had become entirely ceremonial, both because they could no longer be worn to enclose the face as the original, and because those later types are more nicely decorated with engravings. 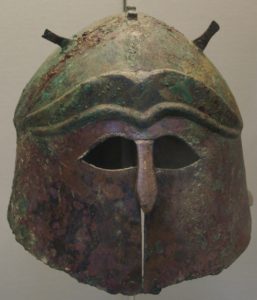 Apulo-Corinthian helmet from Ruvo, Apulia, about 400-350 BC, now in the British Museum, London.

Only about half the surviving helmets (47) can be attributed to a known findspot. 31 Of those come from southeastern Italy, two from Campania, a single one comes from Etruria (Vulci) and none from Rome itself. Looking at that list suggests they were used by Greek warriors in Italy, Illyrians and perhaps Lucanians, but not by Romans. Unfortunately only 19 surviving helmets can be dated with any certainty and precision. They span a period of about 500 BC – 350 BC. That’s it as far as the hard evidence goes. 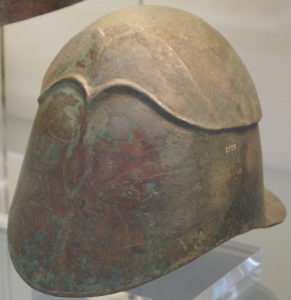 Apulo-Corinthian of the final style. 'Said to be from Etruria', about 350-300 BC, now in the British Museum, London.

If you take the above into account, you really wouldn’t expect Romans from, say, the Second Punic War to be wearing Apulo-Corinthian helmets. That is, not unless we have to suppose those helmets had been passed on by at least five generations and the legionary comes from southern Italy. That might be stretching it. 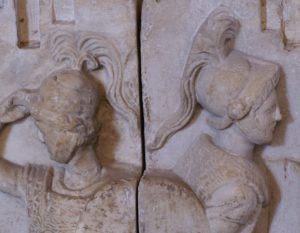 The two soldiers on the Ahenobarbus relief. The right-hand man seems to be wearing an Apulo-Corinthian helmet.

Then what about the Ahenobarbus relief? It’s hard to make out whether the Mars figure is wearing a classic Corinthian or an Apulo-Corinthian. In fact, at least one of the soldiers seems to be wearing something similar. But then, the cavalryman looks like he’s got a Boeotian helmet on his head; speaking of few surviving helmets... 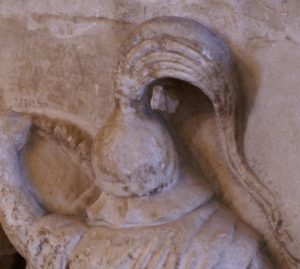 The cavalryman on the Ahenobarbus relief, who seems to be wearing a taller, more conical version of a Boeotian helmet.

More importantly, Rome was very enamored with all things Greek at the time and it’s not difficult to imagine the (often Greek!) sculptor copying a bust of a Greek strategos. Those are usually portrayed in exactly the same manner, with a Corinthian helmet pushed onto the top of their heads.

The same goes for Etruscan cinerary urns. Though it’s certainly not difficult to find examples of warriors with what seems to be an Apulo-Corinthian helmet, we have to keep in mind that many of those ceramic boxes portray Greek history and legends. So a deliberately archaizing style is a possibility. Alternatively, it’s possible the Apulo-Corinthian helmet was associated with Greeks via Magna Graecia where it did, of course, originate. 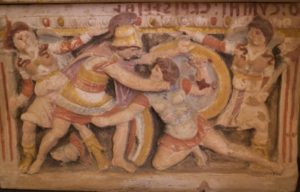 Etruscan cinerary urn picturing the Greek story of the fight between Eteocles and Polyneices over the right to rule the city of Thebes. 3-2nd century BC, Archaeological Museum of Chiusi, Italy.

Obviously, with proportionally so many of these helmets unprovenanced in date and time, it is certainly possible that some might be younger and from areas in Italy more strongly associated with Rome. After all, the provenanced and dated ones come from warrior graves, which just was not a Roman ‘thing’. That in itself, in fact, combined with the comparatively small number of surviving helmets might suggest that the helmet remained in longer and more widespread use. But the available evidence doesn’t support Romans sporting Apulo-Corinthians in any numbers.