Many of the ancient frescoes that once decorated the homes of wealthy Romans in Pompeii have been removed from their original site and can now be admired in the National Archaeological Museum of Naples. A personal favourite of mine is the fresco depicted in this photograph I took back in 2013: 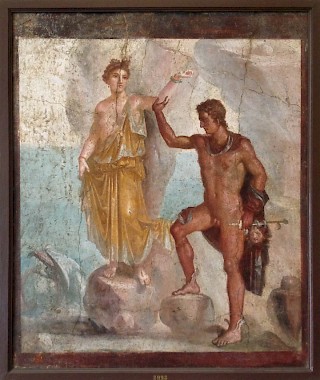 We see Perseus freeing Andromeda from the rock that she had been manacled to, her left arm is still locked in place. She is standing on top of a boulder, with her back against the rock to which she had been affixed. Her right breast is bare, a sign that she is not of the contemporary world, as Roman women in Pompeii would almost certainly not have gone around town half-naked.

Perseus wears a cloak, but is otherwise nude, a characteristic way in which the Ancients depicted male heroes. His sandals are not drawn, but the little wings at his ankles indicate that he has the ability to fly. If you look carefully, you will see the head of Medusa just below and to the right of his left hand, with some of her snake hair apparently coiled around the scabbard of his sword.

You will notice that Andromeda’s skin is very pale, while Perseus’ skin is darker. In ancient Greece and Rome, women were expected to spend a lot of their time indoors, doing household chores, weaving textiles, and so on, while the business of men took place largely outdoors, including trips to the agora or forum, and they would therefore get more easily tanned.

The scene in this fresco takes place immediately after Perseus either killed or chased off the sea-monster (which you can still see in the bottom left corner). It’s perhaps good to remember that according to the story, Andromeda had never met Perseus so far and he rescued her only after he had secured her hand in marriage with her parents. Nevertheless, the marriage of Perseus and Andromeda seems to have been a happy one.

The fresco was recovered from the House of the Dioscuri in Pompeii. The house was named after the frescoes in the entrance passage that depict Castor and Pollux (Polydeuces). Other frescoes included a depiction of the goat-like Pan with a hermaphrodite, Achilles being revealed by Odysseus on the island of Skyros, and Oedipus facing the sphinx.

This fresco, like many other fine frescoes in that house, came from the peristyle, an open courtyard or garden that was surrounded by a colonnade. The fresco had originally been painted onto the surface of a pilaster; another fresco was found nearby, which depicts Medea as she perhaps contemplates killing her children, who are shown playing nearby.

Can we read some kind of message in these two frescoes, positioned close to each other in a part of the house where one might contemplate life as one strolls through the colonnade? Perhaps the fresco of Perseus rescuing Andromeda was meant to remind the man of the house that he should treat his wife well (come to her rescue if needs be), while the picture of Medea suggested that disaster would befall the man and his household if he scorned her.