Ripples on a Hoplite Pond

A couple of projects are coming to fruition at the time of writing and they have me thinking. We’re finishing issue 14.2 of Ancient Warfare exploring the development of the early Roman legion, and I have just proof-read my next book for Osprey, Combat 53 – Athenian Hoplite versus Spartan Hoplite, exploring three battles in the Peloponnesian War (Sphacteria, Amphipolis, and Mantinea if you are interested – its due out in January). Those two topics have surprisingly coalesced a subject in my mind – the equipment of the hoplite.

When we explore the history of the hoplite, we often rely on early 5th century images of the ‘classic’ hoplite – linothorax cuirass (occasionally a bronze muscled cuirass), aspis, kranos helmet – usually Corinthian although there are other designs (Illyrian, Chalkidian). Our hoplite is armed with the dory and different designs of sword (xiphos, kopis, machaira, or the short encheiridion for the Spartans). Added to these are greaves, a cloak (usually chlamys but we could use himation, tribon or even syria), and the shield curtain. By the end of the 5th century we find more variety in helmet choices – the pilos helmet and even the Phrygian have appeared (the last is much more commonly associated with the Macedonians although it is on at least one Athenian monument from the 5th century). The Boeotian helmet too was probably around then (although again associated with the later Macedonian cavalry). At the same time, we find multiple funerary monuments which depict hoplites wearing only their tunic – short chiton or exomis (worn over only the left shoulder). Some show ‘heroically’ naked hoplites  and it is always hard to know if we are dealing with a ‘heroic’ image of the dead or a portrait of man as he may have appeared. One clue is in the other accoutrements – these naked hoplites carry aspis and dory, wear a sword and, most importantly a cloak (such as the funerary stele of Lykeas and Chairedemos from Salamania now in the Piraeus Museum). Why is a cloak important you ask – we shall get to that in a moment. 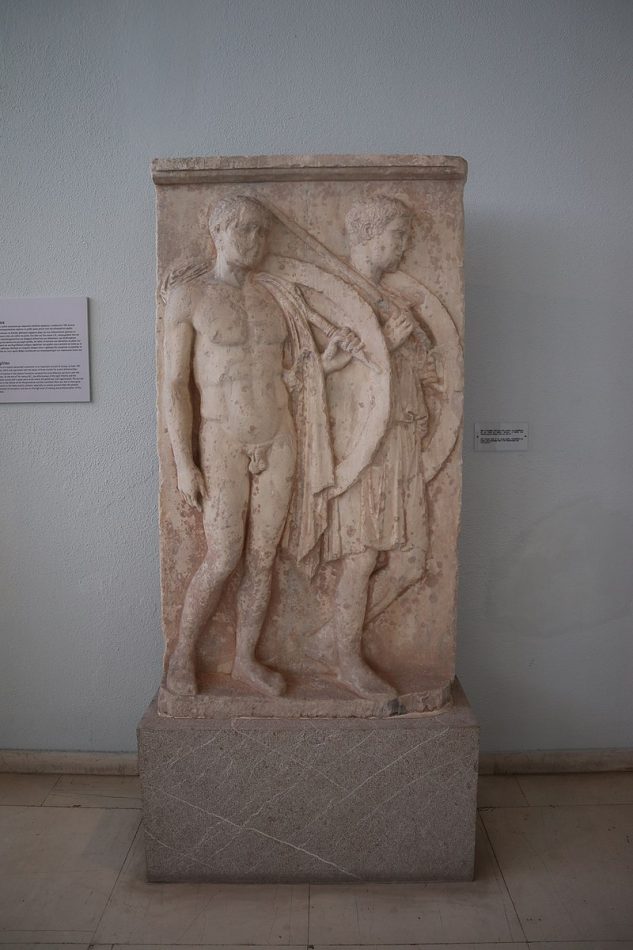 The greaves and shield curtain seem to have fallen out of use by hoplites in mainland Greece in c.460-450 BC – images of hoplites we can date after that time still have the other gear but not greaves or shield curtains. During the Peloponnesian War it seems that hoplites started to wear less armour too – although this is problematic (more armour came back into use in the 4th century and how widespread a lack of armour was is difficult to gauge). The symbols of both Spartan and Athenian hoplites were shield, spear and cloak. The cloak was given to Athenian ephebes on their ‘graduation’ from training, and at Sparta, young men were likewise presented with a red cloak – the phoinikis. Helmets were less important (and we even find bare-headed hoplites on some Athenian funerary reliefs – such as on the stele of Lykeas and Chairedemos). And the pilos helmet, long associated with Spartans, can be found worn by Athenians too (such as on the funeral stele of Sosias and Kephisodoros – although I have seen it argued that these are actual pilos hats, not the helmets made to look like pilos hats). The presence of a cloak in funerary reliefs when all other armour is lacking makes it probable we are dealing with portraits of actual hoplites wearing less armour (but still with the three iconic elements of the hoplite - aspis, dory and cloak – a ‘heroic’ naked figure would, perhaps, not be shown with a cloak. This idea is complicated by several later funerary monuments showing men still wearing a Corinthian helmet (such as on the Stele of Alkias of Phocis now in Athens) a style which we usually consider was old fashioned by the Peloponnesian War but seems to have continued to be worn. 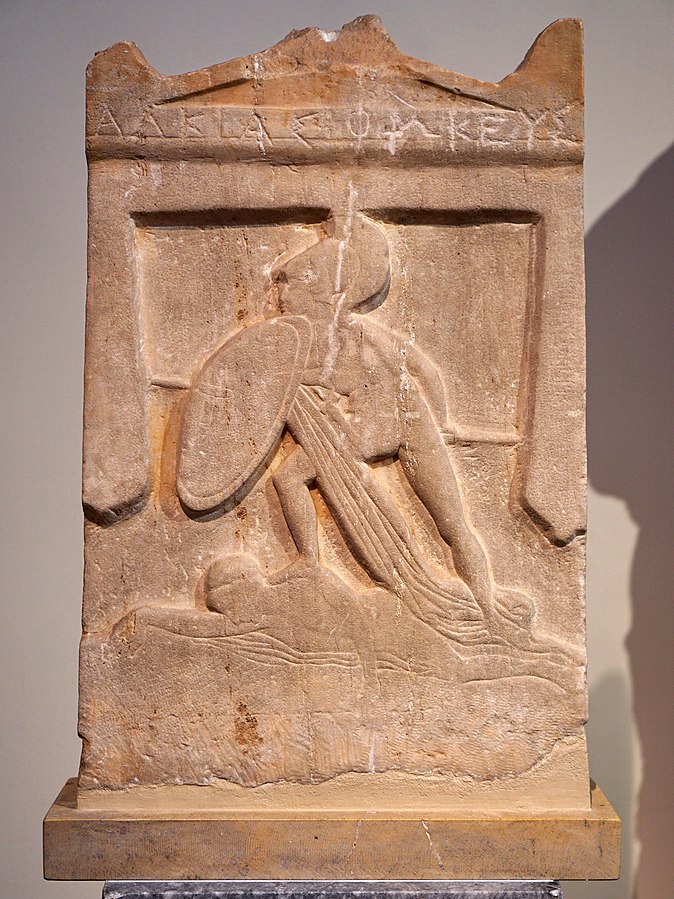 The same goes for muscled cuirasses (such as on the gravestone of Philoxenos and Philoumene in the Getty Villa Collection) – we still see them in the 4th century and beyond (in fact, Roman officers and emperors are shown wearing them into the 5th century AD). Some would argue that these styles fell out of use and their depiction is a classicizing element. However, it should be pointed out that a Corinthian helmet was still a usable piece of war gear (indeed examples in museums could still be donned today) and muscled cuirasses could be useable for a very long time. So, what does that tell us about the changing world of hoplite equipment. 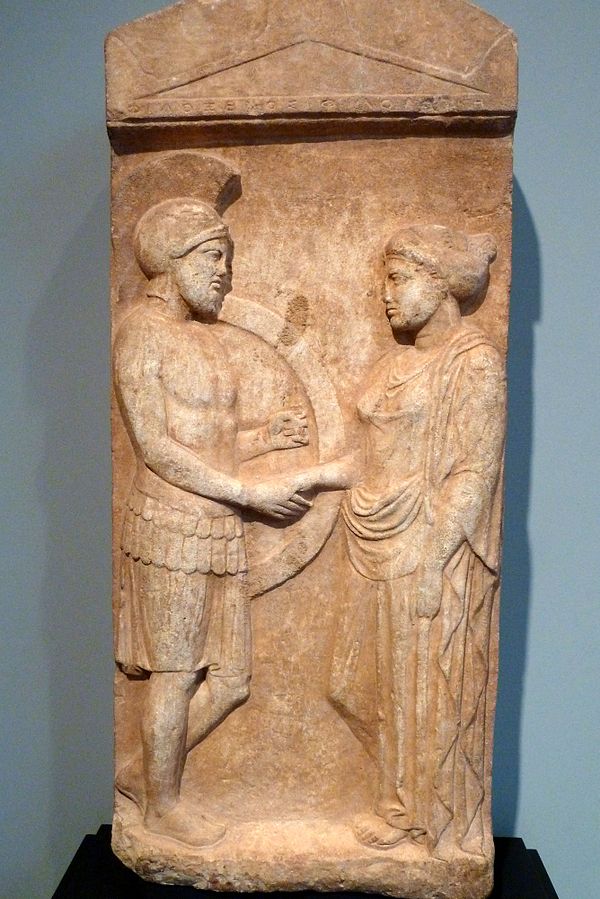 There is no doubt that hoplite equipment evolved – on the Greek mainland, greaves fell out of use, as did shield curtains, and new styles of helmet were introduced. So how can thoughts about the development of the Roman legion help?

Arguments about the Roman hoplite phalanx have come under scrutiny recently, you could almost say  attack – the idea is that the Romans did not fight in formation similar a classical hoplite phalanx (the notion that they did has long been held). Yet we find the imagery of 5th and 4th century Romans who have circular aspis shields (clipeus in Latin), hasta spears, swords, helmets which look very similar to their Greek counterparts, and linothorax or muscled cuirasses too (there are other forms of armour and shields also in evidence from Italy). Yet on frescoes from Magna-Graecia and Italy dating to the 4th century we also find greaves on figures who look like hoplites in every other respect (such as the Etruscan Sarcophagus of the Amazons, now in Florence or on various cinerary urns). 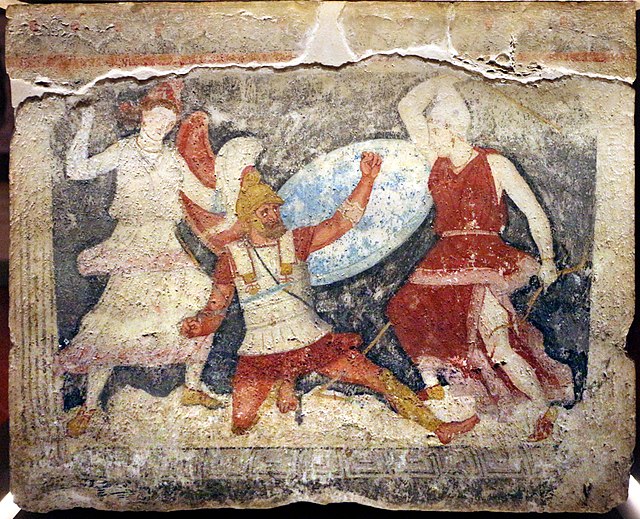 And yet, by this time the greave was out of favour in Greece. On the other side of the Aegean from Greece, in Anatolia, we find the Nereid monument (built c. 390) again showing figures who look like hoplites in every respect, including armour - but they have shield curtains – a feature long out of favour in mainland Greece. (Interestingly there don’t seem to be any greaves worn by the hoplites shown on the Nereid monument).

And to the north of Greece, in Macedon, we find greaves and armour too (not to mention more frequent used of the Phrygian and Boeotian helmet – such as the frescoes in Mieza). 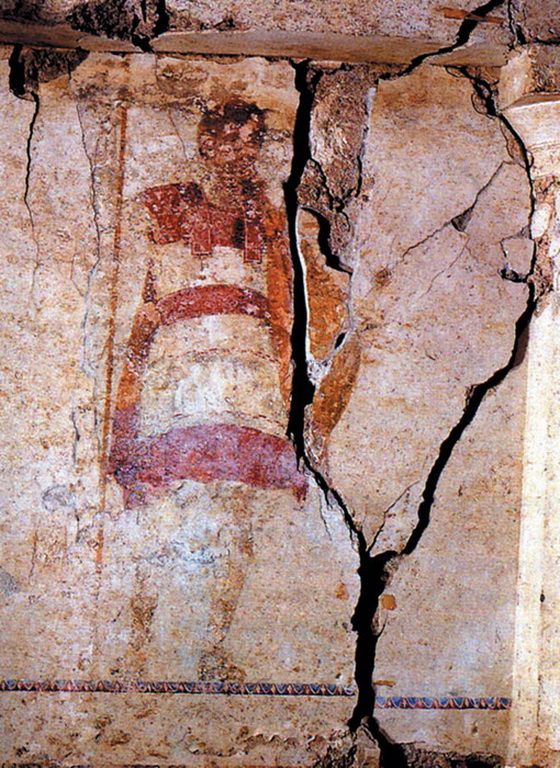 So, at the time that elements of armour were seemingly out of fashion (though not universally) in mainland Greece (the muscled cuirass and Corinthian helmet), we find them depicted to the east, west and north. And elements like greaves and shield curtains are present beyond mainland Greece at a time when they were not in use in Greece.

There may be other reasons behind these continuations; there don’t seem to be shield curtains in Italy, for instance and so, perhaps their perpetuation in Anatolia was because they were still fighting missile armed foes (but why were no greaves depicted there?). However, it may also be that the panoply of the classical Greek hoplite spread out from mainland Greece (like ripples on a pond), east, west and north from the place of origin. And the style of hoplite panoply which spread was that which had experienced the greatest success – that of the classic hoplite of the first half of the 5th century BC, the equipment of the victors of the wars against the Persians – complete with greaves and shield curtains. By the time that Greece was looking at eliminating bits of kit (perhaps even armour), the areas to which the hoplite panoply had spread were embracing the full old-fashioned hoplite look, complete with greaves and shield curtains and this is recorded in their art. Ironically, with the conquests of Greece by the Macedonians in the later 4th century, those elements (greaves and linothorax especially) would come back into fashion.