In Johnny Shumate’s beautiful illustration of the Siege of Motya – published as the centrefold in issue VII.2 of Ancient Warfare – are shown different shield motifs for Carthaginian, Greek and Italic warriors. The basic source for this particular type of “military” art are the coins issued by ancient cities and peoples, and, to a lesser degree, wall paintings and pottery depicting war scenes. Ancient coins are particularly valuable due to their abundance, which far outnumber the other iconographic sources. 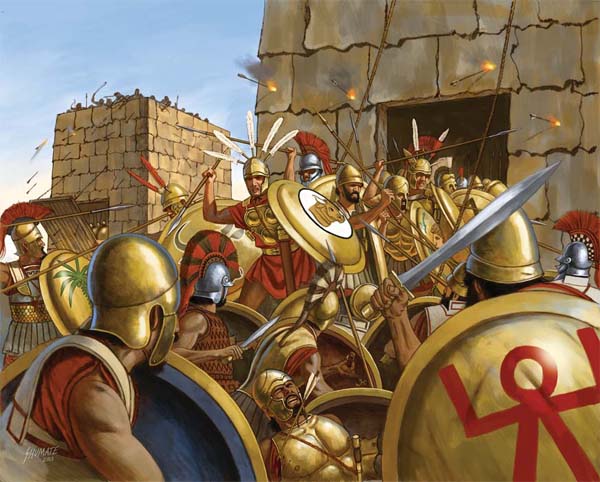 In most cases, the motifs painted on the shields were intended to represent their holders’ strength and warrior ethos, and possibly served to frighten the enemy. Sometimes, they represented the city of origin for the warrior in question. The latter was the case with the Greek cities of Sicily, who were proud of their origins and their relatively greater wealth compared with their poorer brethren of the mother country. Naxos, for example, stressed her famous vineyards by depicting Dionysus’ head beside an enormous grape cluster, while Himera, renowned for her therapeutic baths, chose the rooster, symbol of Greek medicine, for her hoplites’ shields. And so Acragas, deliberately challenging Himera’s rooster, adopted the bold eagle of Zeus as its civic emblem.

Syracuse, instead, preferred to exhibit her citizens’ sporting talent with the four horse chariot, a clear allusion to the Syracusans’ many victories at the Olympic games. Alternatively, another favourite motif of the Syracusans was a woman’s head surrounded by four dolphins, symbolizing the nymph Arethusa, patron of a fountain that flowed inside the city.

The Carthaginians also wished to celebrate the wealth of their estates on the plains of Tunisia, or the quality of the horses they traded throughout the Mediterranean by way of their shield devices. But their most used symbol was the Tanit monogram, which represented the Phoenician goddess of fertility. It was a triangle surmounted by a crescent and a solar disc, which resembled a stylized woman lifting up her hands. There is no evidence for it, but perhaps this emblem was also painted onto shields.

If so, it was surely intended to be another display of good fortune, but also a religious symbol, which served to bless the warriors who brandished it. The Tanit monogram is similar to the Egyptian Ankh symbol, which when worn as an amulet was also supposed to protect the bearer’s soul.

Two other class of symbols were, especially in the Greek world, object of decoration for shields. One is the mythological world, which offered infinite sources of inspiration to the commander in search of an emblem for his warriors. Indeed, noble leaders or city states that traced their origins back to a mythological past often emphasized the fact by depicting founding heroes or fantastic creatures related to them.

We have already seen the example of Syracuse with nymph Arethusa, and now we could add Taras to the list. That city’s most used symbol – and its civic emblem still today – was its eponymous hero riding a dolphin. It may have been painted on shields, even if direct evidence is lacking. According to legend, the animal had saved Taras after suffering shipwreck and therefore enabled the founding of the city. The dolphin was sacred to Apollo and the main temple in Taras’ citadel was therefore dedicated to him. We may even suggest that Taras used other symbols related to Apollo to decorate the shields of her hoplites.

Letters of the alphabet

The second class of symbols to be considered is the most recent, as well as the simplest, namely alphabetic letters. Sparta’s capital letter lambda – referring to Lacedaemon, the original village from which the city had sprung – is universally known as the symbol of her feared hoplites from the second half of the fifth century BC onwards.

The same practice was used at Athens, where the letter alpha (A) had the same function. Thus,mutatis mutandis, we can suppose that these practice was adopted elsewhere too. It would not be pure speculation to imagine Syracusan hoplite shields marked with sigmas or, during the years of Dionysius’ tyranny, deltas.

The Etruscans adopted much of their military equipment from the Greeks. Typical Italic elements included the round or roughly triangular breastplates. The round, double-grip Argive shield was also taken from the Greeks and seems also to have usually been decorated. Archaeology has unearthed the use of three civic emblems of the people who inhabited ancient Tuscany, namely: the Gorgon’s head for Populonia, the boar and the open hand for Tarquinia.

The more barbarous Italics, like the Campanians, preferred rugged animal motifs for showing their courage and fierceness before the enemy. The most used were wolves and bulls. It is relevant to note that during the Social war (91–88 BC) the Italic secessionist peoples chose as their symbol a bull goring the Roman she-wolf. 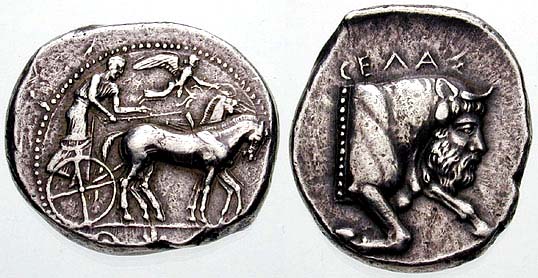 In addition, according to many scholars, the bull is etymologically connected to the word Italia. Initially, this name was used by the Greeks to indicate the southernmost part of Italy, which we call Calabria. Then, when Greek geographic knowledge improved, the word passed, by extension, to denote the whole of the peninsula, and became the name this country still has today. The most widely accepted theory on this subject states that the word Italia was a Greek loan from an Italic language, related to the bull, which could be translated as “land of many bulls”, or – perhaps better – “land of abundant cow pastures”. Thus, the Italoi, as the Greeks called the ancient Italics, were worshippers of the sacred bull who blessed their lands. Furthermore, the modern Italian word for “calves”, or “young bulls”, is vitelli. Since ancient Greek has lost the original Mycenaean sound corresponding to the “v/w” letter (the digamma) the puzzle is solved. We have the word for Italics, the “worshippers of the bull”, (v)italoi, transplanted and adapted to the Ancient Greek language. The modern Italian word for “young bulls”, vitelli, derives directly from the Latin, an ancient Italic language, which has not lost the “v” (compare also with the Sanskrit vatsàs, and the Gothic vithrus, from the same Indo-European root).

With regards to the wolf, we should now consider the case of the Lucanians and – shortly thereafter – the Romans. The Lucanians, considered one of the fiercest Italic tribes together with the Samnites, seem to derive their name from the Osco-Umbrian word for wolf, lukos (compare Latin lupos). The wolf was the animal sacred to the Italic war god Mars. And the purest symbol of Rome was the she-wolf suckling the twins Romulus and Remus, sons of the princess Rhea Silvia and the god Mars. Today it is also the emblem of one of the two football teams of the city of Rome, the other one having adopted – unsurprisingly – the eagle.

Pliny the Elder is an essential source for Roman military symbolism before the Marian reforms of 104 BC. The ancient naturalist reports how Republican legions used – apart from the famous eagle – four other types of blazons: wolves, minotaurs, horses and boars. In particular, while the eagle served as first badge, the other animals were used by each of the ordines. Since the ordo was the usual word for “rank”, it has been suggested that these were the single standards of the three ranks of the classic manipular army: that of the hastati, principes and triarii.

However, these three ranks do not match well with four symbols. There are two other possible explanations. It is known that at some point after 338 BC, during a supposed transitional phase from the old hoplite-style army to the manipular army, the Roman forces consisted of four legions. Two of these legions were the first to be split from the old army in 366 BC and would have used the wolf and the boar as their emblems, for these two animals seem most appropriate to early Roman religion. (The boar was the animal sacred to Quirinus, the Sabine equivalent to Mars, and by this time almost one third of Rome’s population was of Sabine stock.)

The minotaur and the horse pose a greater problem. According to this theory, the minotaur was introduced when Roman citizenship was extended to the Campanians in the late fourth century BC. It has been noted that on Campanian coins, the Italic bull was sometimes represented with a human head (and not as a bull-headed human in the Greek fashion). The minotaur was then the symbol of the third Roman legion, made of newly enfranchised Campanian citizens. The horse – though too common to be effectively explained – could also be a Campanian influence, as the Campanians were considered Italy’s greatest horsemen.

The other hypothesis connects these symbols to the manipular army: while three animals would have served as symbols of the three ranks of heavy infantry, the horse, could very simply have been used as a symbol for the cavalry. Whether related to the manipular army or to the Roman army of the late fourth century BC, the four animals are also the most frequently encountered motifs on legionary shields.

Filippo Donvito is a student of law from Milan. He is a great enthusiast of Ancient and Medieval history, and is currently working on his Master’s Degree concerning the Military Diplomas of the Roman auxiliary soldiers. He has written an article on the Siege of Motya for Ancient Warfare issue VII.2.