The original name of Horemheb may have been Paatenemheb. His family came from Herakleopolis Magna. However, nothing is known for sure about the origins of the king. Horemheb was married to Mutnedjmet, a songstress of Amun. She in turn is said to have been the sister of Nefertiti, the wife of Akhenaten (r. 1353–1336 BC). Nevertheless, this was probably a rumour spread by the same king as means to further legitimize his ascendance to throne.

Horemheb’s career started in the army during the reign of Akhenaten. He may have led an attack against the Nubians, who lived in the extreme south. He managed to secure a number of military successes in Nubia. Evidence for these military victories are reflected in his titles and the representations in his tomb at Saqqara, described further down in this article.

During the reign of Tutankhamun (r. 1336–1327 BC), Horemheb progressed in his military career and became the commander of all the army. He was responsible for campaigns into Nubia and Asia. Mostly, the Egyptian efforts were focused on Syria, where the Hittites had wrested control from the Egyptians over Amurru and Karkemish. The goal of the Egyptian campaigns in the region was to re-establish Egyptian rule over Palestine and Lebanon. These campaigns turned into further successes for Horemheb and, as with the Nubian expeditions, the victories secured here were quickly reflected in the honorary titles bestowed on him.

But Horemheb progressed also in his administrative career, becoming scribe and chief registrar of recruits, as well as royal messenger to foreign lands. He was awarded the title, “Royal messenger at the front of his army to the southern and northern lands”. Other titles included: “Crown Prince, Fan-bearer on the Right Side of the King, and Chief Commander of the Army”, “Attendant of the King in his footsteps in the foreign countries of the south and the north”, “Sole Companion, he who is by the feet of his lord on the battlefield on that day of killing Asiatics.”

These titles indicate that Horemheb was very close to the king and held the highest rank in both the army and the administration. He had even been named Crown Prince and successor by Tutankhamun, but after the latter’s premature death it was Ay, Tutankhamun’s vizier, who seized the throne, although this may have initially only been a stop-gap measure.

On his death, Tutankhamun had left behind a young widow, Ankhesenamun. She wanted to avoid that Ay would become king indefinitely and tried to maintain her power by seeking another husband, who would become king upon being married. Possibly in order to maintain good relations with the Hittites, she even asked the Hittite King Suppiluliuma to give her a husband. The latter agreed and sent his son Zannanza, who was promptly murdered on his way to Egypt. It is possible that either Ay or Horemheb had had a hand in this.

Ay, despite his advanced age, finally managed to secure the throne and become king. Horemheb then became vizier. In Zizinia, in the modern city of Alexandria, there is an inscription that seems to refer to a war in Syria against the Hittites; Horemheb is mentioned as regent of the land of a new, unknown king, probably Ay. Despite Horemheb being the second most powerful person in Egypt, Ay originally appointed his son (or grandson) Nakht Min as Crown Prince. But Nakht Min died prematurely and Ay was left without heirs, when Ay eventually died, he could only be succeeded by one man: Horemheb.

The reign of Horemheb

After becoming king, Horemheb’s first concern was to find support and to legitimize his claim to the throne. Of great importance is his Coronation Text, where he claims to have been chosen by Horus of Hutnesu; the latter supposedly introduced him to Amun, who welcomed him and crowned him during the Opet Festival. In the same text, Horemheb claims to have been well prepared for the royal tasks thanks to the close collaboration with his immediate predecessors. 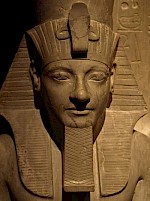 Horemheb established special relations with the clergy of Amun, who supported the King and whose High Priest of Amun was made directly answerable to the king. Noteworthy from this point of view is a 5m-high stele, called the “Great Edict” and located in the temple of Karnak. In this text, the king declared his intentions of maintaining discipline, and established severe rules for the conduct of soldiers and for state employees, aimed at preventing abuse of power, corruption and fraud.

As far as internal affairs are concerned, Horemheb appointed two viziers to respectively control the northern and the southern parts of Egypt; he also made them military commanders. He was the first to really set off Akhenaten’s damnatio memoriae, erasing the heretic king’s name from inscriptions and demolishing the city of Akhetaten, reusing many of the stone blocks from Akhenaten’s city to construct his own buildings. Moreover, Horemheb dated his own reign as starting from the end of the reign of Amenhotep III, acting as if his predecessors simply never existed, and in some instances also erased the name of Ay.

Horemheb instigated building projects both at the temple of Karnak – mostly in the Great Hypostyle Hall – and Luxor. He also built a rock–temple at Gebel el-Silsila and a temple for Seth in Avaris, the old Hyksos capital. Furthermore, he restored some of the robbed tombs in the Valley of the Kings, including the grave of Thutmosis IV. The king usurped and reused the buildings of his immediate predecessors, such as the festival building of Amenhotep II, and replaced their names with his own.

From the military point of view, under Horemheb’s reign the army had two main divisions, corresponding to the northern and the southern part of Egypt. Training centres were established respectively in Memphis and in Thebes. The king attempted to restore Egyptian power in Nubia and in the Levant. It is noteworthy that in the temple of Karnak he is depicted both receiving tribute from Nubians and presenting Nubian and Asiatic captives to Amun. He was also involved in fights with the Hittites to conquer once more Amurru and Qadesh, but without success; finally, he signed a treaty with the Hittites.

The exact duration of Horemheb’s reign is a matter of debate. His final year as ruler of Egypt as attested in Egyptian inscriptions and documents seems to have been the thirteenth. However, evidence from Babylonian chronology and from some other documents suggest that he may have reigned for more than twenty years.

Horemheb, like his predecessor Ay and his successor Ramesses I, was a man experienced both in war and government. Horemheb had quite a career behind him when he finally managed to secure the throne. Like Ay and Ramesses, he came from an important family that was closely linked to the royal family. Through skilful manoeuvring, he had managed to exploit the situation and become king of Egypt.

Horemheb appointed his vizier Paramessu as his heir and successor. As king, Paramessu would become known as Ramesses. He originally came from Avaris, the Hyksos capital in the Eastern Delta. His life was similar to that of Horemheb. He was not directly related to the royal family and had first been an important army officer, notably as commander of the fortress of Sile on Egypt’s eastern border. He had become an important scribe before being appointed as vizier. Possibly it was precisely for his eastern connections that he had been chosen by Horemheb, who may have grown worried over the situation in the east.

After his death, Horemheb was buried in the Valley of the Kings in tomb KV 57, which was never properly finished. (Horemheb’s original tomb was located in Saqqara, and its construction was already started during Tutankhamun’s reign, when Horemheb was still far from becoming king of Egypt.)

In this tomb, Horemheb is given 90 titles, most of which are military. His military triumphs over both Nubians and Asiatics are depicted in the reliefs. He is even shown receiving the “gold of value” – a group of precious ritual golden objects – from the king. Strangely enough, almost no Hittites are depicted, while some individuals thought to be Cretans are shown. Noteworthy from the military point of view is the representation of a horseman, sitting far back on the horse and holding what looks like a bow. This shows that even when chariotry was a dominant force, riding horses was not entirely unknown. Horsemen were used for strategic tasks such as reconnaissance and to aid chariots in trouble.

Arianna Sacco is an Egyptologist who has studied Archaeology and Egyptology in Naples and has obtained a second master’s degree in Interdisciplinary Approaches to History, Archaeology and Cultural Anthropology from the University of Thessaly in Volos, Greece. She is currently working on her PhD thesis about the Hyksos in Egypt during the Second Intermediate Period. She earlier contributed an article on the Hyksos for Ancient Warfare vol. VII, issue 1.