Yesterday, we left Spartacus on a ship bound for the Italian peninsula and the city of Capua in particular. Ancient sources claimed that the city had originally been founded by the Etruscans. Capua was one of the main cities in Campania. This Etruscan link is interesting. Some Roman sources suggested that gladiator contests were originally invented by the Etrusans.

However, this is nothing new: Roman sources frequently claimed that some of their customs had been adopted from the Etruscans. Modern scholars have latched onto this idea, depicting the Etruscans as rather more bloodthirsty than the average ancient people. But in reality, it seems more likely that gladiatorial contests were invented in Campania sometime before the first century BC, perhaps inspired by contests featuring single combat as once used by the Greeks (for example, the duel that is a part of the funeral games for Patroclus in the Iliad).

Wikipedia gives a pretty good overview of the origins of gladiators and I also recommend that you check out Katherine E. Welch’s The Roman Amphitheatre: From Its Origins to the Colosseum (2014). I marked a passage on Google Books that deals with the ‘Etruscan hypothesis’ and more that you might want to give a read.

Last we left off, Spartacus was in a boat bound for Italy. Once in Capua, we are introduced to the man who would eventually purchase Spartacus and have him trained in his ludus (gladiator school): Quintus Lentulus Batiatus (played with gusto by John Hannah). In the historical sources, his prenomen is actually given as Gnaeus, but perhaps the writers thought the audience would then be confused with Gaius Glaber and so changed it to Quintus? His wife, Lucretia (played by Lucy Lawless of Xena: Warrior Princess fame), is shown to be conniving in the best traditions of Roman leading ladies (cf. Siân Phillips’s Livia in the BBC rendition of I, Claudius).

The amphitheatre in Capua itself is shown as a relatively grand structure that appears to be modelled on the theatre that was originally constructed during the reign of Augustus (see, for example, the photos in this Wikipedia article), or about six or seven decades after the events of the show: 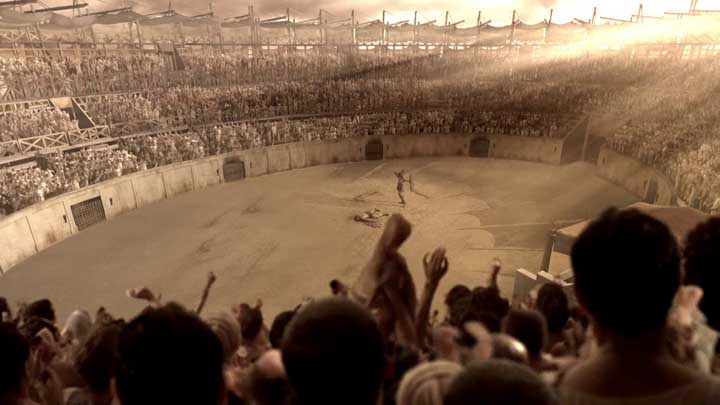 In the arena, Spartacus is condemned to fight against four gladiators. The battle is shot in the over-the-top manner of most depictions of violence in the show, and one screenshot will suffice to show that, in this universe at least, people have several liters’ worth of blood more than us mere mortals, and their blood pressure is also several orders of magnitudes higher: 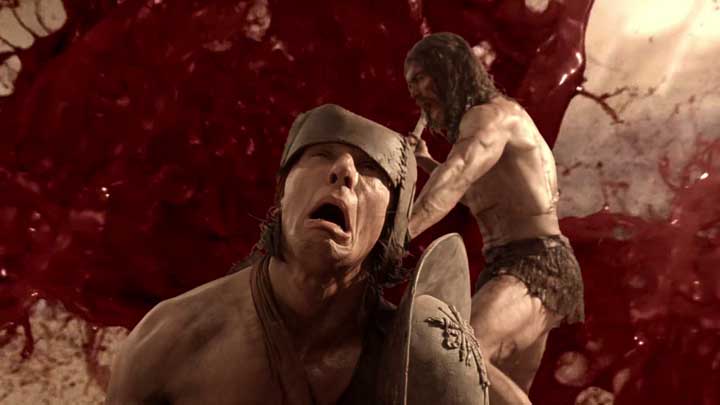 Everyone had expected Spartacus to die in the arena, but to everyone’s surprise he manages to defeat all four of his opponents.

During the arena sequences, we are also treated to a view of the audience, consisting of a mix of men and women. My initial reaction was that this was wrong: didn’t women have to sit apart from the men in Roman amphitheatres? Turns out, Spartacus actually gets this right: in the time of the Republic, men and women sat together in the audience, and it wasn’t until the age of Augustus that women began to be separated from the men. A useful article by Jonathan Edmondson delves into this and related subjects:

Men and women certainly sat together during the Republic: so, for example, the dictator Sulla openly sat next to his future wife Valeria at the gladiators (Plutarch Sulla 35; cf. Suet. Aug. 44.2). And this lasted into the early imperial period, since Ovid, in his mock-didactic work, the Ars Amatoria, written between 9 BC and AD 2, recommended chariot-races and gladiatorial performances as ideal hunting-grounds for young men to flirt with, and win the hearts of, young women (Ovid Ars am. 1.135–162 [chariot-races], 163–176 [gladiators]).

Of course, I don’t know if female spectators, regardless of class, would bare their breasts like some of them do in these scenes. We know from the ancient sources that gladiators could acquire rabid fans and groupies, and perhaps emotions got as out of control as what we see in the show. Certainly, modern audiences can get completely wrapped up in things at modern pop concerts and sports matches.

Once the spectacle is over, the question arises what this Thracian warrior is called. I’ve referred to him as Spartacus all through the above, but in the show he is always interrupted whenever he wants to give his real name and it’s ultimately Batiatus who gives him the name ‘Spartacus’, named after ‘the legend of the Thracian king of old’. There is a good page on Spartacus over at Jona Lendering’s website Livius.Org, and the Wikipedia page on the man isn’t bad either.

After the first episode, the remainder of the first season deals, on the one hand, with matters pertaining directly to the ludus. Spartacus meets with the Champion of Capua, a Gaul by the name of Crixus (played by Manu Bennett, who would also portray Slade Wilson AKA ‘Deathstroke’ in the show Arrow). In the ancient sources, Crixus is one of Spartacus’ commanders. In Kubrick’s Spartacus, the two are friends almost immediately, but the show opts for the relationship to be antagonistic, with matters only becoming worse once Crixus becomes seriously injured and Spartacus becomes the new Champion.

The other main characters in the ludus are interesting. Doctore, the title of the lead trainer in a ludus, whose name is later revealed to be Oenomaus (known from the sources as another Gallic commander under Spartacus), is portrayed sympathetically by the imposing Peter Mensah. A special shoutout goes to Ashur, a Syrian slave played by Nick E. Tarabay. Ashur had once been a gladiator, but a serious wound to the leg left him crippled and he instead became a trusted servant to Batiatus himself. Ashur is duplicitous to a fault and is ultimately responsible for much of the plot in the show.

Aside from the affairs in the ludus, we are also treated to Batiatus and his wife trying to plot ways in which they can advance themselves in Roman society. Batiatus is continuously insulted by his social superiors for being just a lanista and he and Lucretia eventually resort to murder and blackmail in order to get ahead. Batiatus ultimately aims to become aedile, a magistrate responsible for public buildings, festivals, and the grain supply. It would have been the first step on the road towards higher office and, with that, higher social standing.

I won’t go into particulars as regards the course of the first season. If any of the above sounded interesting, you should check it out for yourself, as well as the next three seasons (Gods of the Arena, Vengeance, and War of the Damned). But be warned: the show features lots of gory violence, explicit male and female nudity, and quite a few raunchy sex scenes. And while it’s not very historically accurate as far as costumes are concerned, the overall tone and atmosphere is more or less what we have come to associate with modern depictions of the ancient world.

Visually, this series looks great, though the overall look is very similar to other modern movie and television shows set in ancient times, with most shots featuring this now familiar golden sheen and deep shadows. This look was first established by Ridley Scott in Gladiator (2000) and cemented by 300 (2006). I will devote my next blog post to discussing this aspect a bit further.