Struggles of the Ionian Greeks

The latest issue of Ancient Warfare just arrived in the mail. War, trade, and adventure: struggles of the Ionian Greeks is the tenth issue of the magazine that I have edited and I consider it one of my favourite issues to have appeared so far, with the issue on ancient Egyptian warfare a close second.

The reason for this is simple: issue VIII.2’s theme touches on a topic that, I think, is particularly noteworthy. Typically, when we think of the ancient Greeks, we think of a great people united in language and culture that are famed for city-states, high culture, and their opposition to Achaemenid Persia. But the ancient Greeks had a very rich and varied culture. In my introduction to the theme, I briefly discuss the major dialect groups, of which the Ionian Greeks were one. Each dialect group occupied a particular area of the ancient Aegean, and the Ionians ranged from Euboea and the Cycladic islands to the central coast of Asia Minor.

The Athenians used an Attic dialect, which was closely related to the Ionian dialect, and the Athenians believed that they were in fact the originally Ionians. They claimed to be autochthonous, literally “born from the earth”. The Ionians often compared themselves directly with the Dorians, speakers of a different dialect, who inhabited among other places much of the Peloponnese, including Argos and Sparta, and the islands of Crete and Rhodes. The Ionians got a reputation for high culture and artistic refinement, while the Dorians were always regarded as more militaristic and enjoying the simpler things in life.

For Ancient Warfare, we obviously looked at the military exploits of the Ionians. Of all the Greeks, they were most active when it came to overseas activities, including trading and piracy, colonization and mercenary services. In the issue, Cezary Kucewicz examines the sources for Ionian marauders and merchants, while Pat Lowinger explores the frequently violent encounters between Ionian cities in Asia Minor and the Lydian Empire. Ionian colonization is a topic discussed in more detail by Vasilis Pergalias, where he discusses the westward movement of the people of Phocaea. 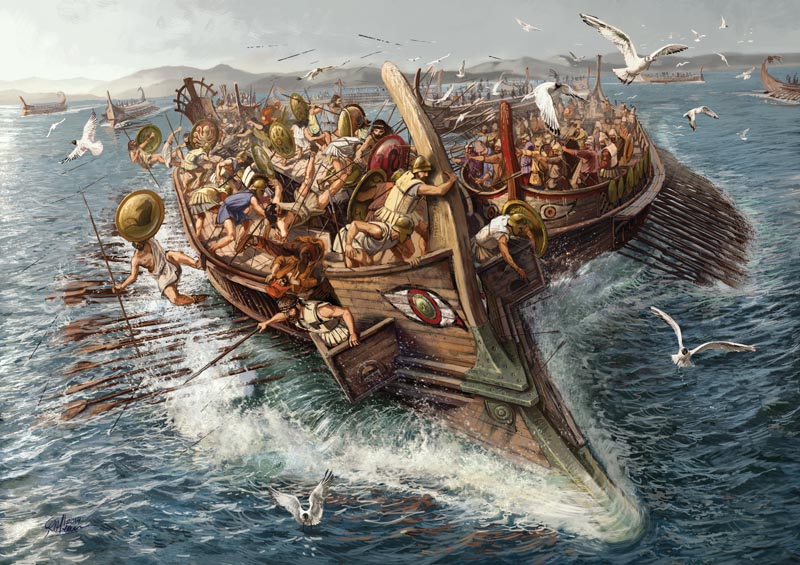 When you think of the Ionians, you probably think first and foremost about the Ionian Revolt, when inspired by Eretria and Athens, the Greek cities of Asia Minor rose up against their Persian overlords. But for this issue, I really wanted to emphasize that there was more to the Ionians than just the Ionian Revolt, and as a result only one article deals with the Revolt in any detail, namely Sidney Dean’s treatment of the Sea-Battle of Lade (494 BC). The centrefold, beautifully made by Radu Oltean, depicts a clash between a Greek and Persian trireme.

The last two theme articles discuss the history of the Ionian Greeks after the Persian Wars. Michael Park’s article offers an overview of the relationships between Athens, Sparta, the Greeks of Asia, and the Persian Empire. Mark McCaffery’s article in turn focuses on a very specific episode, namely the treatment of the Milesians at the hands of Alexander the Great. (After Alexander, differences between Greek dialects became less pronounced.)

I believe that this issue is a great introduction to the Ionian Greeks and offers something completely fresh for readers. If you wish to explore the topic further, the various entries in each article’s further reading section should point the way. In future, I think it might be interesting to devote an issue to, for example, the Dorians, which will serve as a counterpoint to this one and further demonstrate how varied the ancient Greeks really were.

As an aside, you may have noticed that I haven’t been blogging as actively as I used to. The reason for this is that I am currently involved in two different projects for Karwansaray, one in particular consuming a great deal of time. I hope to be able to tell more about these projects in the not-too-distant future, and I hope to be able to blog more regularly again in a week or two from now. Until then, please enjoy reading issue VIII.2 and feel free to send me your comments and suggestions for improvement.