Currently, I’m getting ready to put Ancient Warfare issue IX.6 through the editorial process. For an article by Cezary Kucewicz on the treatment of the war dead in ancient Greece, illustrator Juhani Jokinen created a centrefold that captures the desolation after battle. A prominent feature in the picture are swords, and his original version accidentally featured Roman-inspired weapons instead of Greek ones. Greek swords are quite different from Roman swords and I thought it would be interesting to devote a blog post to the topic.

During the Late Bronze Age, the Mycenaeans used a large variety of swords. Initially, the Mycenaeans had a fondness for long, thin, and relatively fragile rapier-like swords, but over time they started to use ever shorter and stouter blades, which began to resemble dirks more than anything else and were probably all used for thrusting. A problem with bronze is that it bends relatively easily and tends to dull more quickly, which is why shorter, stabbing swords tend to be more common in the Bronze Age.

Late in the thirteenth century BC, a new type of sword is introduced in the Aegean from Central Europe, the so-called Naue II-type sword or Griffzungenschwert (‘grip-tongue sword’), which tends to be around 50–70cm in length. This was, in the words of Anthony Snodgrass, the first true ‘cut-and-thrust’ sword. The Greek examples always have a half-moon-shaped pommel at the end of the hilt.

After the collapse of the Mycenaean palaces, these swords become the predominant type of sword in use in the Aegean and with the start of the Iron Age, ca. 1000 BC at the latest, are quickly made in iron rather than bronze. Naue II-type swords are found in graves of the Early Iron Age and were also dedicated at sanctuaries.

Here is an example of a Naue II-type sword on an Attic black-figure tondo, dated ca. 560 BC (original source). It depicts a kneeling warrior and his sword is painted very clearly, though the shape is a little more stout than one would expect for a typical Naue II-type sword: 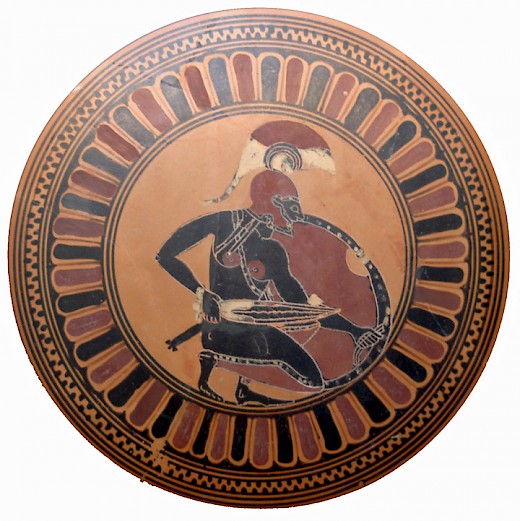 The Naue II sword stayed in use until the late sixth century BC and is often easily recognizable in Greek art. After about ca. 525 BC it becomes exceedingly rare in art and seems not have been used anymore by the vast majority of Greek warriors. Instead, two different types of swords enter into use from the later sixth century BC onwards.

The most common Greek sword has a leaf-shaped blade and straight cross guards. The latter is an important way to tell it apart from the Naue II-type sword, which has the hilt flow naturally into the blade and therefore lacks a cross guard. The pommel tends to be simple and is often round, squarish, or squat. These swords were often relatively short, probably around 60cm or so in length. It’s common for reenactors to refer to a sword of this type as xiphos, but that’s really the normal Greek word for sword.

Here’s an Attic red-figure amphora, dated ca. 500–490 BC, that depicts the departure of a warrior. His sword is in in its scabbard, suspended from the shoulders using a baldric. You can clearly see the straight cross guard that easily distinguishes this type of sword from the Naue II-type (original source): 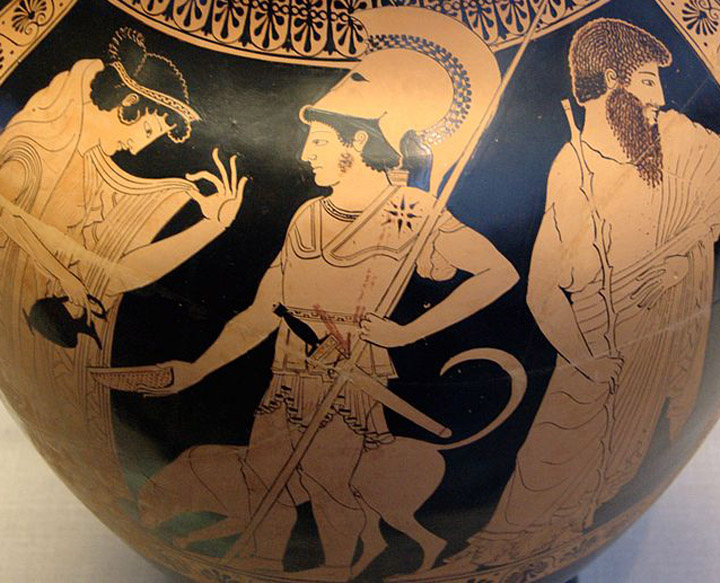 Finally, there is the famous curved sword, often referred to as either kopis or machaira. It is sometimes referred to as a sabre and was, indeed, also used by Greek cavalrymen. In art, it is often depicted overhead to emphasize, according to some scholars, the fact that it was used for cutting down enemies. However, in Greek art, most swords tend to be shown held overhead when in used in actual combat, including the ‘cut-and-thrust’ Naue II-type sword.

A famous depiction of the kopis in action is provided by this Attic red-figure kylic dated to ca. 480 BC. It depicts a Greek (Athenian?) hoplite about to strike down a Persian soldier. Both figures are equipped with curved, slashing swords (original source): 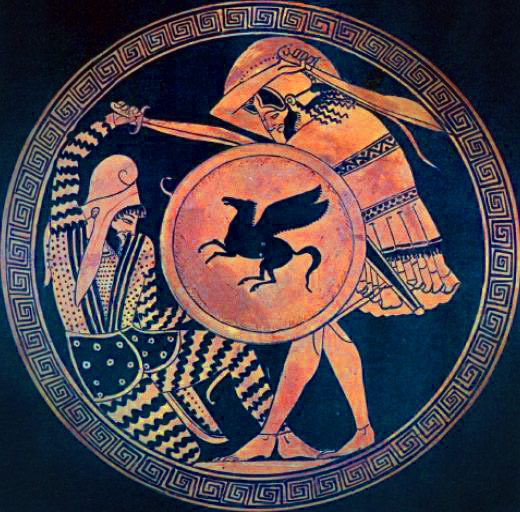 These last two types of swords would last into the Hellenistic period, with the kopis in particular proving popular in art, and the weapon of choice for cavalrymen.

If you want to read more about swords in ancient Greece, a good starting point – still, after all these years – is Anthony Snodgrass’s Arms and Armour of the Greeks (1967). Tim Everson’s Warfare in Ancient Greece (2004) is more up-to-date, but follows Snodgrass closely, and emphasizes armour more than weapons. An important reference work is I. Killian-Dirlmeier’s Die Schwerter von Griechenland, ausserhalb der Peloponnesos, Bulgarien, und Albanien (1993), but you will have to be able to read German, and it might not be easy to find.

And on the advice of Marek Vercik, I will add some less accessible books for those who really want to delve deeper. An interesting article is R. Jung and M. Mehofer’s ‘A sword of Naue II Type from Ugarit and the historical significance of Italian-type weaponry in the Eastern Mediterranean’, published in Aegean Archaeology 8 (2009), pp. 111–135. Some excavations have also yielded large numbers of weapons. For Olympia, check out Die Angriffswaffen aus Olympia (Olympische Forschungen 29), by Holger Bätinger and published in 2001. For the site of Kalapodi, check out Kalapodi II: Ergebnisse der Ausgrabungen im Heiligtum der Artemis und des Apollon von Hyampolis in der antiken Phokis, edited by Rainer C.S. Felsch (2007). You’ll have to go to an academic library to read these titles.