Taking your place at the battle of Marathon

This month marks the 2,510th anniversary of the battle of Marathon (unless you are in the ‘no year zero’ camp, in which case it falls in September next year). Nonetheless, this is as good a time as any to be thinking about the battles of the Greco-Persian Wars. In my July blog, I discussed what we know about the place taken by each of the ten tribal taxeis in the Athenian battle line. We don’t know much, and we know more about Marathon than almost any other battle. Well, I’ve done some more thinking and come across some additional research which lets us know the positions, more or less, of six of the tribal taxeis at that battle. That means we only have the positions of four tribal taxeis to assign and only a limited number of places for them to go. That, to me, is enough to invite speculation about where exactly the Athenian hoplites stood in their tribal divisions, each about 1,000 strong, at the battle of Marathon that September day in 490 BC.

To quickly summarise what we saw back in July. The divisions of Athenian armies were organised by tribe (phyle), each tribe contributing a taxis (plural taxeis) to Athenian armies. These taxeis varied in strength although at Marathon, it was the full levy of her citizens. Modern historians place this at around 10,000 men. At Marathon, the tribal taxis of Aiantis was both the tribe of the polemarch, Callimachus, and the tribe of the deme Marathon, the location of the battle. Based on Herodotus (6.111) and later evidence (Thucydides 5.67.2), Aiantis’ taxis was stationed on the right as the position of honour, of both the polemarch Callimachus and Marathon itself. On the left wing, the Plataeans were stationed (Herodotus 6.111). Next to them was most probably the taxis of Oineis, that of the Athenian strategos of the day, Miltiades – if you couldn’t be on the right you took the opposite wing as the next best position (again, we can use Thucydides 5.67.2 for this detail). Probably close to the right wing was the tribe of Hippothontis, since Cynaegirus and Aeschylus, the sons of Euphorion, were positioned there and Cynaegirus died at the ships, just as Callimachus did. Probably also on the right was the tribe of the strategos Stesilaus son of Thrasylaus (we do not know which tribal taxis he commanded) since he also died at the ships (Herodotus 6.114). It is attractive that these three men, all from tribes on the right wing reached the Persian ships first and died there. The fact that Stesilaus and Cynaegirus’ deaths are separated suggests they were not from the same tribe. We might consider that Stesilaus was the strategos of Aiantis but I have kept them separate. 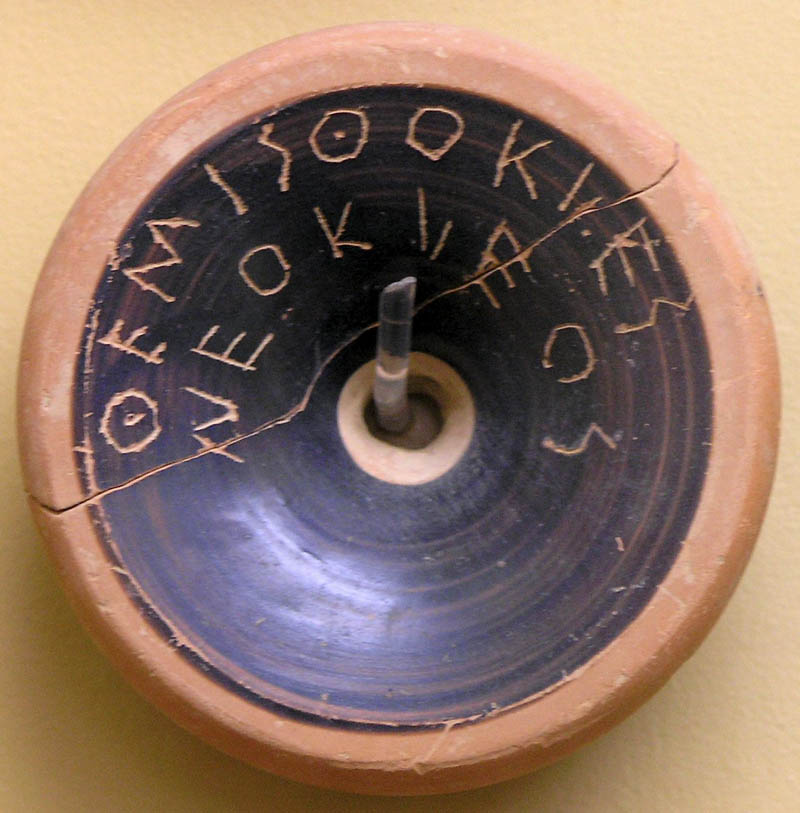 Plutarch adds to our knowledge, telling us (Aristides 5) that in the centre of the line at Marathon, Aristides commanded his tribe, Antiochis, as strategos and that it stood next to Leontis (commanded by their strategos Themistocles). These two tribes held the centre of the Athenian line which was hardest pressed (Aristides 5.3). Herodotus tells us that the taxeis at Marathon were positioned according to strength (6.113), presumably the most populous in the centre. It would therefore seem as if the strongest contingents and therefore the most populous tribes in 490 BC were Antiochis and Leontis (although Herodotus also tells us that the centre was only a few ranks deep and the wings packed (6.111) so this may not have been so. Detailed arguments about the populations of Athens’ tribes at the time might support either view. We therefore have the order at Marathon of the Plataeans and five Athenian tribal taxeis (and the strategos of another):

The order of Antiochis and Leontis may have been reversed and so too that of Hippothontis and Stesilaus’ taxis but on balance we have a battlefield deployment with gaps of only three positions on left and two on the right. 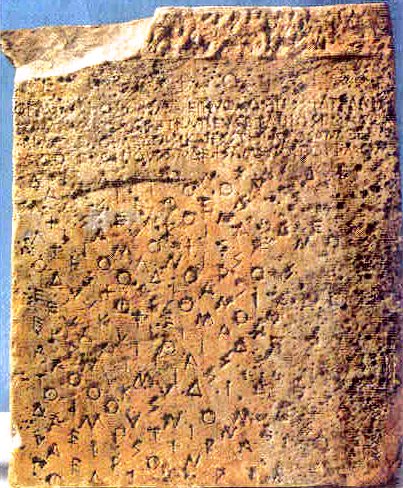 In 2000, a casualty list was discovered at Herodes Atticus’ villa at Eua (modern Loukou) in the Peloponnese (SEG XLIX 370N). This was a list of 22 names of men of the tribe of Erechtheis from the battle of Marathon. 22 men represents approximately 11% of the 192 casualties suffered by the Athenians at the battle (Herodotus 6.117) and so not disproportionately high (or low). If Antiochis and Leontis bore the brunt of the casualties based on Plutarch, Erechtheis may have been close to them in order to suffer some casualties – so perhaps closer to the centre where the majority of casualties occurred when the Athenian line was breached there (Herodotus 6.113). That would place the taxis of Erechtheis to the left or right of Antiochis and Leontis in the centre. Alternatively, the men of Erechtheis may have fallen at the ships where there was clearly hard fighting – perhaps we can place the taxis of Erechtheis on one of the wings. The Plataeans (on the left wing), however, only suffered six casualties (based on the excavation of the Plataean burial tumulus on the battlefield by Professor Spyridon Marinatos in 1970). We might suggest therefore that the wings, perhaps especially the left wing, suffered relatively few casualties. A location for Erechtheis closer to the Athenian centre therefore seems more likely, so either to the left or right of Leontis and Antiochis. 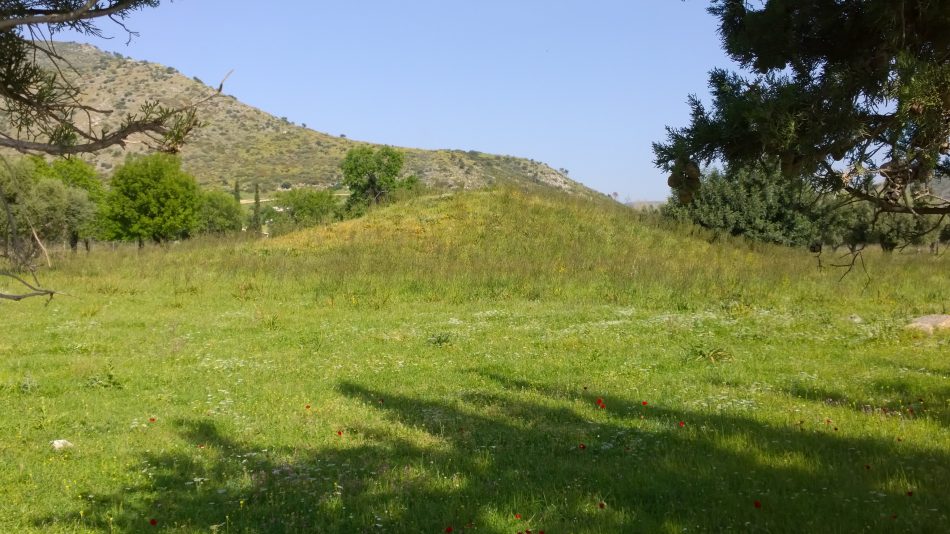 The Plataean tumulus on the field of Marathon

We also have the anecdote of Epizelus, son of Couphagoras, (Herodotus 6.117) who went blind after seeing an enormous enemy who advanced and killed the man next to him. Given that the enemy was advancing in this anecdote, we might also place Epizelus in the Athenian centre although we do not know to which tribe he belonged – it could be Antiochis, Leontis, or one of the unassigned tribes (perhaps even Erechtheis).

The Athenian battle order of the battle of Marathon, September 12th 490 BC.

Adding in our knowledge of the taxis of Erechtheis we now have tentative battle order for Marathon which looks like this:

My reason for placing Erechtheis on the right of Leontis is not entirely random. You could argue that they could equally have been positioned on the left of Antiochis. At the later battle of Delium in 424 BC, however, Socrates (also from the tribe of Antiochis) saved the life of Laches (from the tribe of Cecropis) and so this might give us a clue that they may have fought close to one another on more than one occasion (Plato Symposium 221A, Laches 181 A-B). We should remember that Antiochis and Leontis also fought next to each other at Potidaea in 432 BC where Socrates saved the life of Alcibiades (from the tribe of Leontis) (Plato Symposium 219E-220D, Plutarch Alcibiades 7.2-3). This tiny clue allows us to place one of our remaining four tribal taxeis with no position in the Marathon battle line to the left of Antiochis.

This means we have only three of the ten Athenian tribal taxeis without a place in the Marathon battle line, one of them commanded by the strategos Stesilaus. If we assign those remaining three on the understanding that their positions may be wrong, we come up with the following battle order: 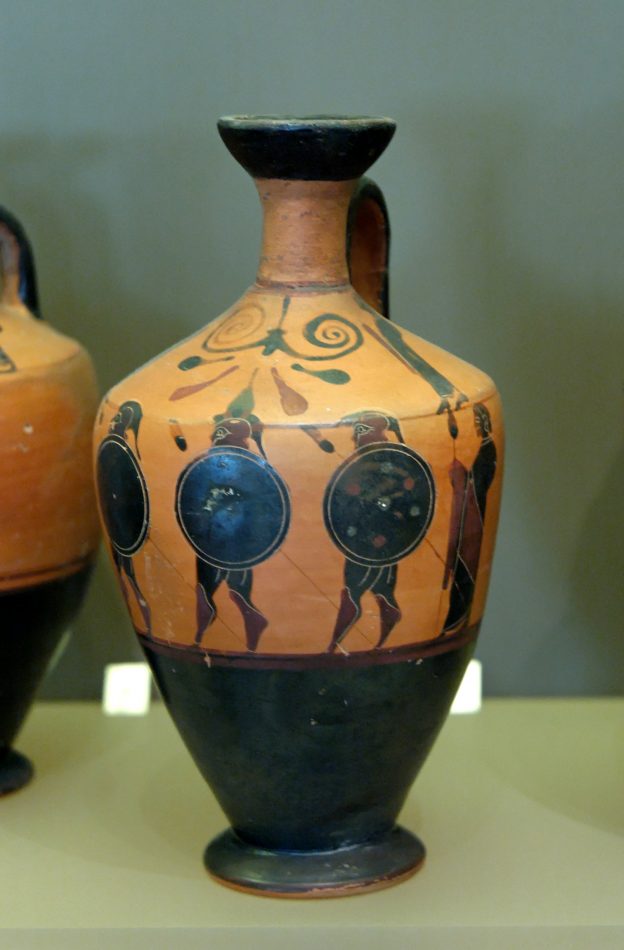 Some of these speculations may be in error. Hippothontis and Stesilaus’ taxis may have been on the left and Antiochis and Leontis may have been in the opposite order (which might affect how I have placed Cecropis and Erechtheis. This battle order is, however, entirely workable, and, if plausible, gives us more to work with. 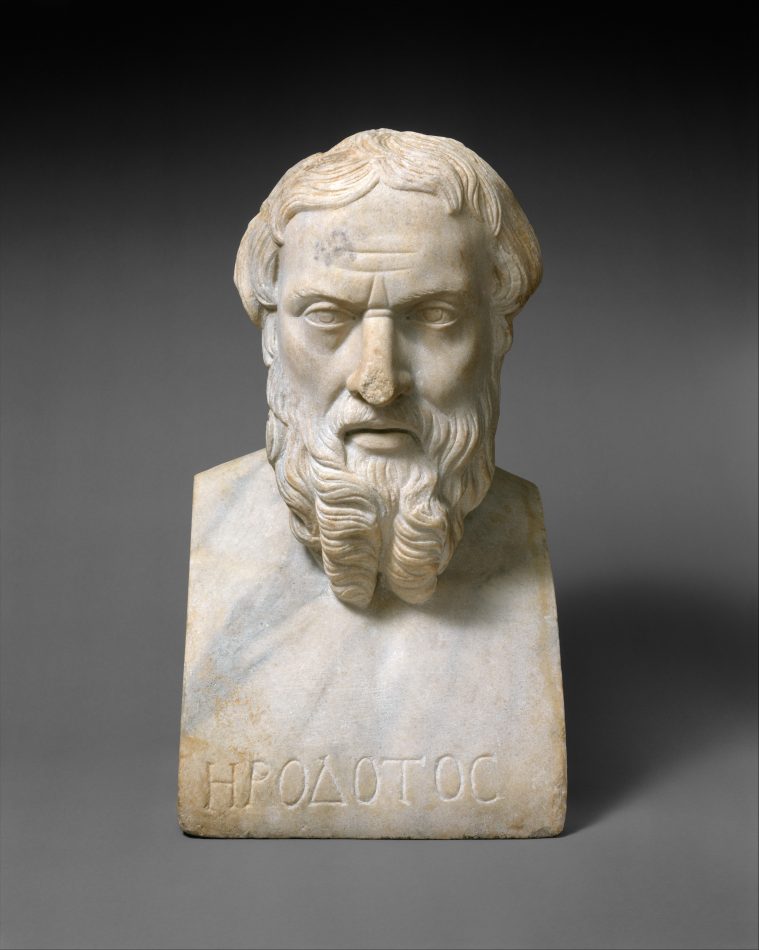 A marble bust of the historian Herodotus now in the Metropolitan Museum of Art (Inv. 91.8)

We are often told that Herodotus’ account of the battle of Marathon leaves much to be desired for the modern ancient military historian. His listeners and early readers would have been able to know instantly who stood where, from the casualty lists in the Athenian public cemetery, and the names of Stesilaus and Epizelus would have instantly been known by their tribe. Details of the Painted Stoa (which showed Callimachus and Cynaegirus) would also have been known and other individuals may have been recognisable.

Other surviving fragments of Athenian casualty lists, all of which date to after 464 BC, and most to within the Peloponnesian War, present casualties by tribe. If more of such lists survived and did so for major Athenian losses such as Delium and Amphipolis in 422 BC, we might be able to speculate more about which tribal taxis stood where in other battles based on losses. As we saw in the July blog, we can confidently speculate that in other battles different tribal taxeis were placed on the right (where the strategos of each expedition would have been positioned) and so the order of the tribal taxeis in Athenian battle lines changed. The order may have been assigned by lot although what little evidence we have, in relation to Leontis and Antiochis for instance at both Marathon and Potidaea, shows that they fought side by side more than once and so there may have been other tribal relationships which determined who stood where in the Athenian battle line.