Taking your place - where did units in the Athenian battle line stand?

In my last blog, I alluded to the fact that my first attempt at this topic produced 9,000 words of argument (that number is still growing). I did feel, however, that I could condense some of that argument into a more readable format for you (but there are great swathes of wordy argument behind some of what is pronounced briefly below!). So, here goes.

The fact is we know a great deal more about the organisation of the 5th and 4th century BC Spartan hoplite army than we do about the Athenian army of the same period. This is remarkable since many of our surviving authors who wrote such accounts were Athenian (Thucydides, Xenophon, Aristotle) or wrote for an Athenian audience (Herodotus). These authors spent much time explaining the Spartan military system (not always consistently) but seem to have thought that their own, Athenian, system was more familiar and so needed less explanation, leaving us in the dark. Writers who wrote later (Plutarch and Athenaeus especially) unfortunately do not fill this gap. I have determined not to use the phrase ‘we don’t know’ but it is almost constantly on the lips of scholars of this material.

Leaping great swathes of those 9,000 words, we come to one aspect of Athenian military practice which I find fascinating – where each unit stood in the battleline. We know that Athenian hoplites were organised by the ten tribes (phylai) of Attica (Erechtheis, Aigeis, Pandionis, Leontis, Acamantis, Oineis, Cecropis, Hippothontis, Aiantis, and Antiochis). In each Athenian military expedition, men from each tribe (and the 139 demes which made them up) would participate. The tribes had a specific order (in the list above) but this does not seem to be reflected on the battlefield. So, in every Athenian military expedition (from the call-up of every male citizen such as at Delium (Thucydides 4.94.1)) to the smallest expedition (which seems to have been 300 men - (Thucydides 5.6.1-2)) men from each tribe will have been represented. The Athenian battle line consisted of ten taxeis (sing. taxis) made up of men from each tribe. It seems therefore that every size of battle force at Athens will have had ten tribal taxeis of varying sizes (at Delium there were 7,000 hoplites, so ten taxeis of approximately 700 men each, at Amphipolis there were 1,200 hoplites (Thucydides 5.2.1), so ten taxeis of approximately 120 men each). Each of these was commanded by a taxiarch (Athenian Constitution 61.3) elected by a show of hands (43.1) from the men of the tribe. Below him were a certain number of lochoi commanded by the lochagos (the number of men in the Athenian lochos is much debated and we know little about it – scholars remain divided (many more words – and a later blog if they can be summarised!). 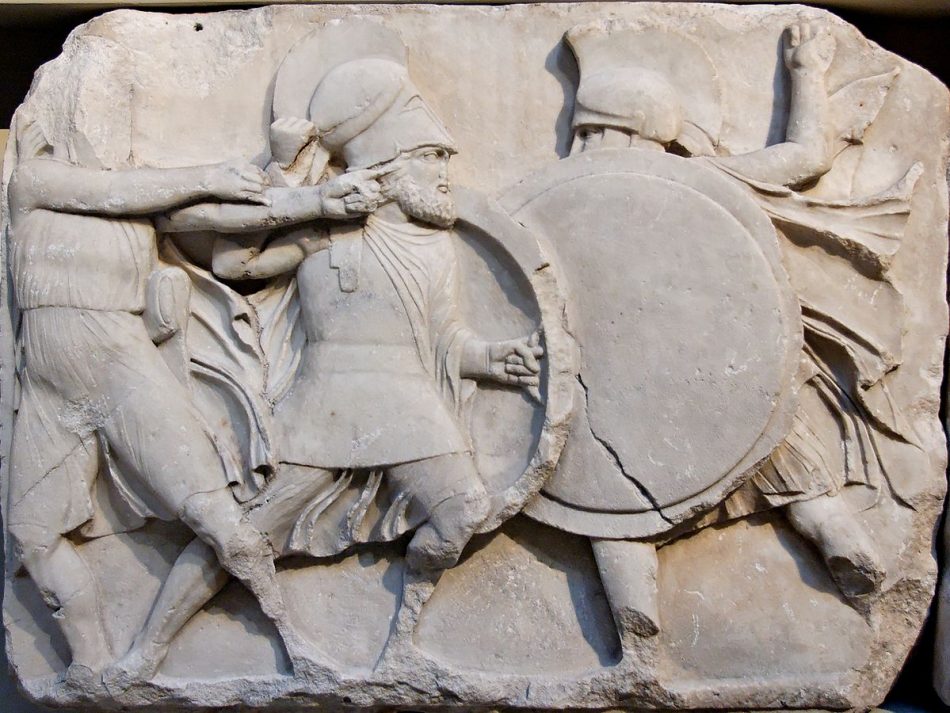 Leaping over yet more words we get to the interesting issue of where the individual taxies stood in the Athenian battle line. We find tantalising evidence all over the place. In his account of the battle of Marathon, Herodotus provides us with several. Firstly, he tells us that Callimachus was positioned on the right of the Athenian line as it was the position of honour (6.111). He will most probably have fought with the men of his tribe and he was from the deme of Aphidna, the most important town in the phyle of Aiantis. So the taxis of Aiantis was probably on the right wing. Next, Herodotus tells us that the other tribes were arranged according to their numbers) or perhaps their number according to the official order). If this arrangement was by strength, it is odd as it seems to present no fixed system (and tells us that the taxeis would not have been exactly equal). If the order was drawn by lot, no evidence tells us as much. Another tantalising clue is the idea that the command of the ten strategoi at Athens rotated (6.110); therefore whichever one of them commanded on the day of the battle he would take the position of honour on the right (especially later when the position of war archon had ceased to be a command position). We know this practice continued until Mantinea at least (Thucydides 5.67.2). When we know the tribe of the commander (and we don’t always) we can therefore at least suggest which tribe was on the right of Athenian disposition. Marathon is odd because we have the (possibly anachronistic) position of polemarch for Callimachus whereas strategoi continued to command Athenian armies into the late 4th century. Nonetheless, we can deduce certain other facts. The battle was fought on Miltiades’ day of command as strategos (Herodotus 6.110-111) and, if he could not occupy the right, he presumably occupied the left wing. He was from the deme of Laciadae in the tribe of Oineis. So perhaps Oineis was on the left wing (and the men of Plataea to the left of them). We have more information for Marathon. Plutarch tells us (Aristides 5) that, at Marathon, Aristides commanded his tribe, Antiochis, as strategos and that it stood next to Leontis (commanded by their strategos Themistocles) and that these two tribes held the centre which was hardest pressed (5.3). These would presumably be in the centre of the Athenian line which eventually broke. We therefore have positions for four of the ten tribes – one on each wing and one in the centre. One further detail is that Cynegirus (and his brother Aeschylus) were at Marathon and that Cynegirus reached the Persian ships first (Herodotus 6.114), perhaps implying they were closest to the enemy vessels pulled up on the beach at the far end of the Marathon plain. Cynaegirus and Aeschylus were from the deme of Eleusis in the tribe of Hippothontis and this suggests that Hippothontis was on the right or left flank of the Athenian line since Herodotus tells us (6.113) that the two wings joined together and then pursued the Persians back to their ships. We therefore have positions for perhaps five of the Athenian tribal taxeis at Marathon.

Commanders and their tribes

In later battles, the tribe of the commander understandably varies. At Sphacteria in 425 Demosthenes (Aiantis) was probably on the right (Cleon, on the left with Pandionis); at Amphipolis in 422 Cleon will have been on the right. At the battle of Lechaeum in the Corinthian War in 391 BC, Iphicrates, from the deme of Rhamnous, the tribe of Aiantis commanded. We might therefore posit his tribe on he right then and in other battles he commanded. For Cimon, son of Miltiades, at the battle of Eurymedon in the 460s, his tribe Oineis would have been on the right. When Pericles led the full levy of Athens out against Megara in 431 (Thucydides 2.31.1), his tribe, Acamantis would have held the position of honour on the right (he was from the deme Cholargos). On Sicily during the Peloponnesian War, the Athenian commanders were Lamachus, son of Xenophanes, from the deme of Oea, tribe of Oineis, and Nicias, son of Niceratus, deme of Cydantidae, tribe of Aigeis. Presumably they shared and rotated the command and on a given day one would take up position on the right, the other on the left (where the third was position (the centre?) remains unknown. 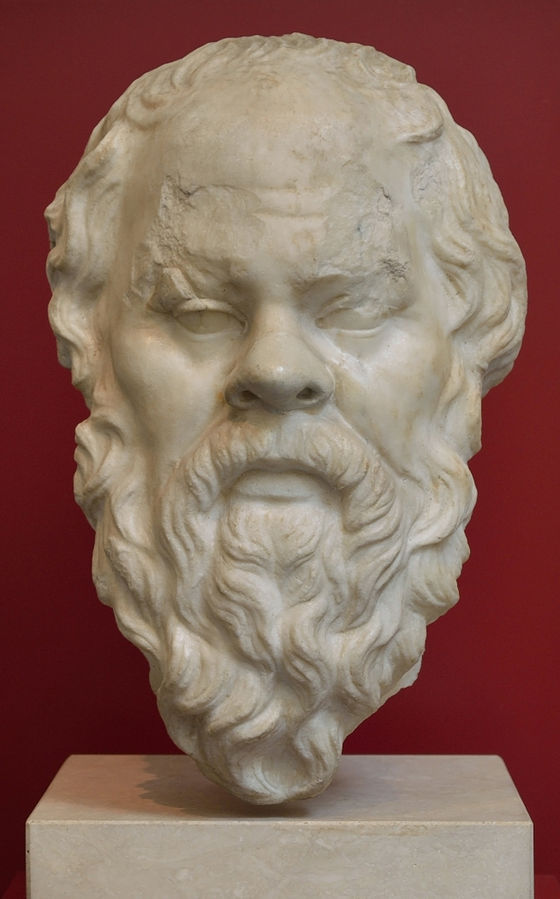 Whether the tribes took the same positions in relation to one another is difficult to ascertain (and we often have no idea of individuals involved in battles, or at least not in enough detail to assign them a deme and tribe). Certainly a different tribe on the right depending on the commander argues against a fixed position. One exception to our lack of evidence is the military career of the  philosopher Socrates, from the deme of Alopece and the tribe of Antiochis. We have more evidence of his career as a hoplite than for any other individual. At the battle of Potidaea in 433/432BC (Plato Symposium 219E-220D, Plutarch Alcibiades 7.2-3), Socrates saved the life of Alcibiades (from the deme of Scambondiae, the tribe of Leontis). This implies they must have been close together on the battlefield – and we can note that Antiochis and Leontis being next to each other at Potidaea echoes the same two tribes being next to each other at Marathon. At Delium in 424, Socrates then saved the life of Laches (Plato Symposium 221A, Laches 181 A-B) from the deme of Aexone, the tribe of Cecropis, which might suggest that those two taxeis were close together on that occasion (Laches was not in command so will have fought with his tribe – at Mantinea when he was in command, his tribe Cecropis would, presumably have been on the right of the Athenian formation). Another, lesser known, tradition is that Socrates also saved the life of Xenophon at Delium (which requires us to accept an older Xenophon – the subject of another blog?). This tradition (Diogenes Laertius 2.22, Strabo 9.2.7) would place Xenophon’s tribe of Aigeis close to Antiochis too (perhaps, Cecropis on one side, Aigeis on the other). 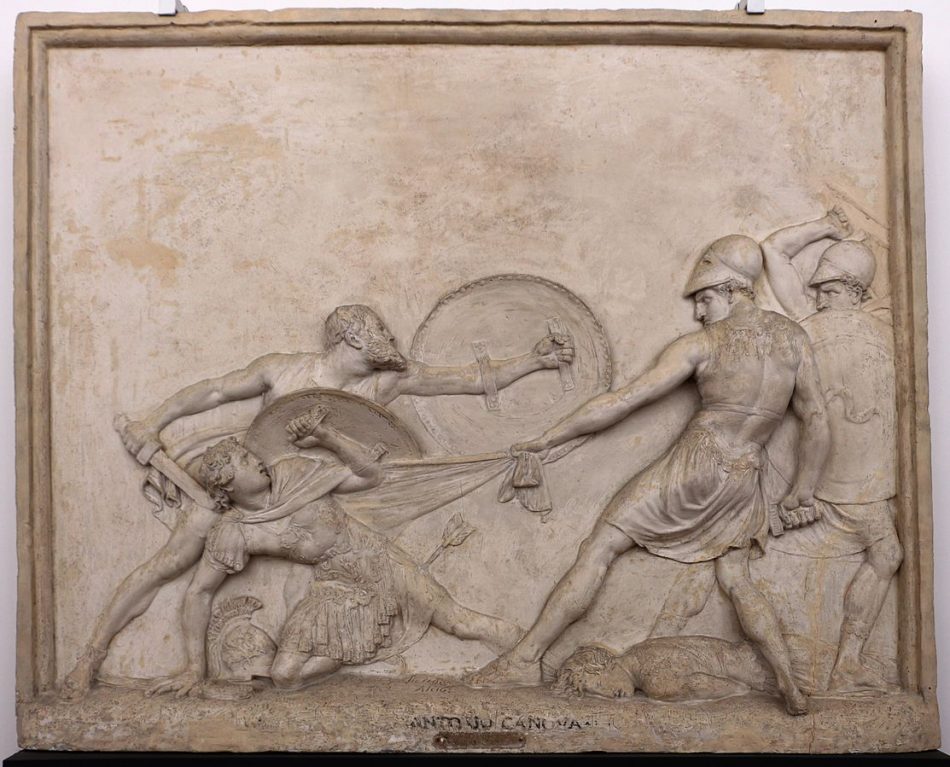 And that alas, is almost all the evidence we have. The position each tribal taxis took up in the Athenian battle line during the many battles of the 5th and 4th centuries BC (at least) is one of the fascinating minutiae about which we know little – but exploring what we do know often leads to remarkable insight and tantalising suggestions.