For my own amusement, I have been making a study of the Macedonian army of Philip II and his illustrious son, Alexander the Great. An interesting, if perhaps not highly informative piece of evidence, is the so-called Alexander Sarcophagus and its heroizing relief depicting Alexander and others in combat and during the hunt.

The sarcophagus was discovered in the late nineteenth century during excavations in Lebanon, close to the Phoenician city of Sidon. It dates to the late fourth century BC. This makes it a near-contemporary work of art and thus a subject of particular interest for anyone who wants to learn more about Alexander the Great and the sociopolitical situation shortly after his death. The sarcophagus was almost certainly made by Greeks, perhaps even Rhodians. In place, the marble still retains some traces of paint. It was made for the King of Sidon, Abdalonymus, who died in 312 BC. The sarcophagus is currently on display in the Archaeological Museum of Istanbul, Turkey. 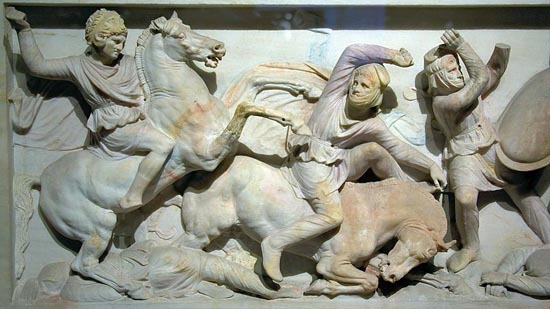 The photo above (source), shows a detail of the relief on one of the long side of the sarcophagus. We see Alexander, at left, at the Battle of Issus (333 BC). The King is shown wearing a lion-shaped helmet, which is perhaps a reference to Heracles, the hero who defeated the Nemean Lion, or otherwise serves to underscore his ferocity in battle. The other mounted Macedonians in this composition (not visible in this picture) have been variously identified as Hephaestion and Perdiccas, but this is no more than a supposition. 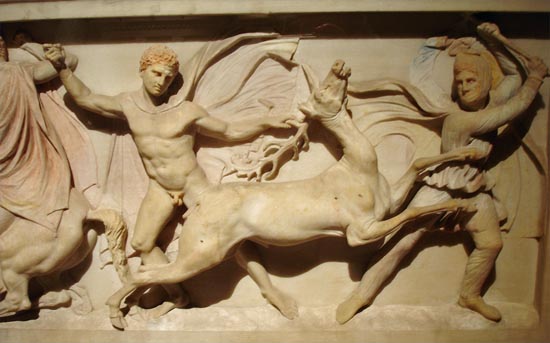 The other long side of the sarcophagus depicts Abdalonymus hunting lions. Abdalonymus was appointed king of Sidon by Alexander, and the fact that the sarcophagus depicts both him and Alexander was no doubt intended to strengthen the bonds between them, and to emphasize that Abdalonymus was rightly appointed (thus securing his dynasty). At the far right of this scene, there are two men – one a Macedonian, the other a Persian – hunting deer; this detail is depicted above (source). Another hunting scene is also depicted on the other short side, where Abdalonymus is shown hunting a panther (in iconographic studies, any large feline lacking manes is often identified as a “panther”).

The other short end of the sarcophagus again depicts a battle, perhaps the Battle of Gaza (312 BC), fought during the wars of the Successors after Alexander’s demise. The picture above is from a painted reconstruction that gives some idea of what the sarcophagus originally looked like (source). The sarcophagus itself has the shape of a Greek temple and features some decoration in the “pediments”, including perhaps the murder of Perdiccas and yet another scene depicting Abdalonymus in battle.

My next blog post will be on the movie 300 (the one from 2006), as well as the comic book that formed the film’s inspiration. I haven’t yet seen the sequel, 300: Rise of an Empire, which has just hit cinemas, and have no intention of going to see it soon, either. After that blog post, you can look forward to another entry of mine on the subject of Philip and Alexander.