The next issue of Ancient Warfare is at the printer’s! It’s the first issue of the tenth volume of the magazine and I wanted it to be something special. I originally picked the Peloponnesian War to be this issue’s theme, but it was clear pretty quickly that this would simply be too big a topic to cover in the span of forty or so pages in the magazine. Since many proposals seemed to gravitate toward the first half of the war, the theme was changed to cover the Archidamian War (431 to 421 BC), rather than the whole of the Peloponnesian War (down to 404 BC).

No idea what the Archidamian War, named after the Spartan king Archidamus, was about? Seán Hußman’s historical introduction does a good job of setting the stage. The introduction for this issue is extra long, since it also includes a length discussion about Thucydides (instead of dealing with him in a separate Source article). This is actually the first time that Ancient Warfare covered Thucydides in any great depth – Herodotus and Xenophon both preceded him.

The other articles on the theme do a good job on fleshing out particular aspects of the Archidamian War. Gareth Williams focuses on Pericles, the Athenian statesman who was struck down by the plague that ravaged Athens in 429 BC. Konstantin Nossov discusses the Spartan Siege of Plataea and includes a great picture by Vladimir Goblubev. Murray Dahm writes about Socrates’ experiences in battle, with a picture by Milek Jakubiec that is a companion piece to his work in issue VIII-1. 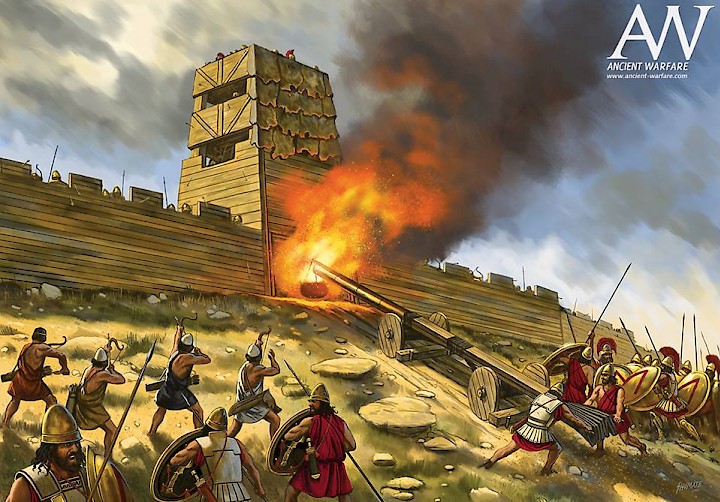 Owen Rees wrote the main article of the issue, dealing with the Spartan Brasidas’ campaigns in the north of the Aegean. A short, two-page by yours truly briefly discusses the temple of Athena Nike in Athens and how it can be interpreted within the context of the Athenian war with Sparta. Roel Konijnendijk then touches upon the ongoing conflicts between Sparta and Argos after the conclusion of the Archidamian War in 421 BC.

Those with a passion for living history will enjoy Friedrich Wilhelm Miesen’s reconstruction of an Athenian hoplite of the Archidamian War. And if Greeks aren’t your main interest, there is a short article (with map) by Konrad and Livia Stauner about Roman soldiers in Egypt’s Eastern Desert, with some piquant comments on prostitutes. Building on the discussion by Jason Crowley and Owe Rees in Ancient Warfare IX-4, Joseph Hall deals with PTSD in ancient Rome.

The issue is rounded out by a discussion of the movie The Viking Queen (which, confusingly, deals with Boudicca!) by David L. Reinke, a review by our good friend Alberto Pérez Rubio of an interesting Spanish book on Roman military standards, and a description of the cover illustration by newcomer Nick Fokas, who provided the idea for the picture and supplied cover artist Johnny Shumate with the necessary information.

All in all, I am very pleased with how the issue has come together. Since we’ve only dealt with the Archidamian War now, you can look forward to future issues of Ancient Warfare that will focus on the second part of the conflict (the Ionian or Decelean War), and perhaps an issue that explores other wars and battles that were fought during the so-called Peace of Nicias. In short, there’s enough material concerning the Peloponnesian War to fill another two issues at least!

Ancient Warfare issue X-1 is currently available for pre-order. Of course, if you want to make sure you always get the latest issue delivered on your doorstep, it’s a better idea to subscribe instead, if you haven’t already.