The ascendancy of Thebes

In between doing stuff for Ancient History Magazine, I’ve naturally also been plugging away at Ancient Warfare. The latest issue, IX.2, has just been sent off to the printer’s. Its theme is the Theban ascendancy, the brief period in the fourth century BC when Thebes managed to become a dominant force in Greece after defeating Sparta at the Battle of Leuctra in 371 BC. I think this is my new favourite issue of the ones that I’ve done so far. It has a very tight focus (about a decade’s worth of history), great articles and pictures, and deals with a crucial change in the development of Greek warfare.

For this issue, I’ve changed the author biographies a little bit. I received a comment that a line that read ‘So-and-so is a regular contributor’ is not very helpful, not in the least to people who don’t read every issue of Ancient Warfare (for shame!) or who don’t want to dig through previous issues to find out what a particular author’s background is. So even though someone’s a regular contributor, I’ve re-added details about their training, employment, and interests to flesh them out a little bit better. 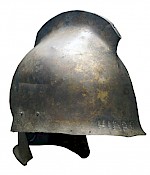 The cover is really great for this issue and looks like an ad for a new TV-series on ancient Greece: dramatic and beautiful, it’s some great work by Johnny Shumate. It depicts the death of Epaminondas at the Second Battle of Mantinea (362 BC). Newcomer Samuel Zilincik wrote about it in the ‘On the Cover’-piece on p. 58.

Regular contributor Owen Rees wrote the historical introduction about the ascendancy of Thebes. The beautiful map by Maxime Plasse that accompanies the article gives a good idea of important places and battles mentioned in the issue. Jona Lendering, co-editor of Ancient History Magazine, wrote the Source article on Plutarch. David Balfour contributed an article dealing specifically with the great military genius of Epaminondas. 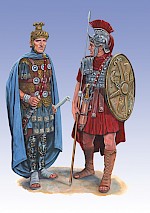 This issue’s Reenactor consists of photos and texts supplied by Friedrich Wilhelm Miesen, and depicts a typical front-rank hoplite of the Theban army. Marc G. DeSantis’s article deals with the prelude to the Battle of Leuctra, namely the Siege of Corcyra, with a picture by Milek Jakubiec. The actual Battle of Leuctra, in which the Thebans under Epaminondas defeated the supposedly invincible Spartan army, is the subject of Roel Konijnendijk’s article. Johnny Shumate, our talented cover artist, also created the centrefold in which the Thebans are shown charging at the Spartan lines.

Rounding out the themed articles is Ryszard Tokarczuk’s article on the Sacred Band, the elite military unit most characteristic of the Theban army. It features a great image by Angel Garcia Pinto. It is followed by non-theme-related articles. Joe Hall will help you read ancient Roman tombstones, while Duncan Campbell’s article deals with the question if Rome had any links with the Far East and China in particular. Continuing the series on ‘Hollywood Romans’ where David Reinke left off is Graham Sumner’s piece on the 1945-movie Caesar and Cleopatra, complete with a full-page illustration of two costumes used in the film.

All in all, I think this really is one of the best issues of Ancient Warfare to have appeared so far and I’m curious to hear what you think of it once it’s made its way to shops and subscribers. You can pre-order it now!