Around 500 BC, the peoples of an Iron-Age culture nowadays referred to as “La Tène” arose from the earlier “Hallstatt”-culture and began spreading from their original homeland in central Europe. They were the most advanced metal workers of the time, and also aggressive, with a strong warrior ethos. To the Mediterranean peoples with whom they traded and interacted, they were called Keltoi in Greek, and Galli or Celtae in Latin. They were basically rural peoples, large towns called oppida only arising through the fourth century BC. They quickly spread over the next hundred years or so and overpowered neighbouring peoples in southern Germany, France, northern Spain and southern Britain. They also crossed the Alps into Italy, in ever growing numbers.

In 396 BC, the Insubres tribe captured Melpum (modern Milan). In about 350 BC they finally captured the leading Etruscan cities in the Po valley, Padana and Misa, ending Etruscan rule there. The sophisticated irrigation and drainage systems the Etruscans built were not maintained, and simpler Celtic agricultural practises took over. The Cenomani tribe settled around Verona. The Boii established themselves further down the Po valley and founded Bononia (modern Bologna). The Senones pushed on furthest, all the way to the Adriatic (see the map for tribal areas in the Po valley). Other, smaller tribes, such as the Taurini and Lingones also established themselves in the fertile valley.

Conflict between Rome and the Celts

In 387 BC, the first clash between Rome and the Celts took place, when the Senones and perhaps others were attacking the Etruscan city of Clusium, which asked Rome for help. The Gauls took umbrage at the killing of some of their ambassadors at Roman hands, and marched south from Clusium into the Tiber valley. The Roman army clashed with the newcomers and were beaten at the battle of the river Allia, fleeing to Veii. The defenceless Rome was largely abandoned and fell to the Senones, and according to Polybius, was occupied by them for seven months. They eventually returned home to defend it from the Veneti, with Rome paying a ransom.

Rome never forgot this terrifying and humiliating conquest, and immediately built the so-called Servian wall around Rome, which was put to the test around 357 BC, when once more the Gauls appeared outside the gates of Rome, this time to be defeated by the Roman Army before the gates. The Po valley was now firmly “Cisalpine Gaul” (“Gaul on This Side of the Alps”), but as Rome steadily expanded in central and southern Italy, the alarmed Etruscans, Samnites and Gauls, plus Sabines and Umbrians, formed a coalition against Rome. An eight-year war saw Rome prevail. Rome now sought to secure the Tiber valley and attacked the Senones in 285 BC, completing their conquest and driving them out by 282 BC. Their former territory became Roman “Public Land”, the Ager Gallicus (see the map).

In 236 BC, the Boii threatened the colony at Ariminum, inviting allies from Transalpine Gaul to assist and threatening a peace that had lasted 45 years. The threat petered out when the Gallic allies fell out and fought among themselves. The terrible punishments meted out by the Romans 45 years earlier were now forgotten among fresh generations of Gauls. In 232 BC, Gaius Flaminius, a plebeian tribune, by-passed the Senate and divided the Ager Gallicus into small lots for Roman citizens, much to the displeasure of the Allies, for the public land really belonged to the Federation, and of the Roman senatorial magnates who were used to leasing large chunks of it. The Gauls, too, noticed this evidence of permanent loss, and feared further encroachment, but bided their time, working on alliances and once again negotiating with Transalpine brethren. 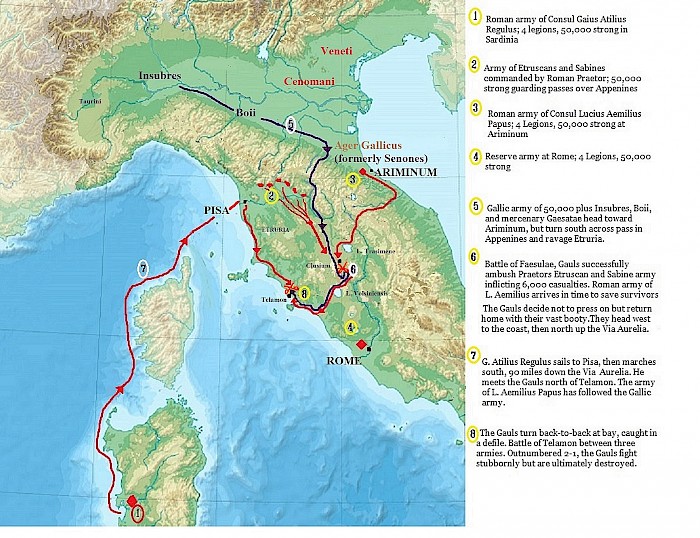 Eventually a league was formed of most of the Cisalpine tribes: the Insubres, the Boii, the Lingones, and the Taurini (called Taurisci by Polybius). Envoys were sent across the Alps to obtain allies, regaled with tales of the ease with which the Senones had taken Rome, and the vast amounts of booty obtained. Large bands of warriors, in warrior societies called “Gaesatae” (literally, “spearmen”; loosely, “mercenaries”) enthusiastically accepted. The Gallic army would be larger than anything seen previously.

Meanwhile, the Romans had not been idle, nor were they unaware of the Gallic build-up, which took several years to prepare and organize. They were thoroughly alarmed, gathered corn and other supplies, enrolled Legions and even marched to the frontiers on rumours of imminent invasion.

The defence of Italy

As the Gallic threat to Italy grew, the Romans had been busy. Early on, they took a census of their manpower both iuniores and seniores (men eligible for the field army, and the older home guard respectively), and of the iuniores of their allies. The totals were recorded by the contemporary Fabius Pictor and have come to us via Polybius (2.24.4). They are a little complicated, because Polybius first gives actual figures for the armies deployed, then gives potential manpower figures for Allies and Romans, and there may be some overlap, because for example Sabines and Campani were technically “Romans”, but cives sine suffragio (“citizens without the vote”) and served separately at this time, rather than in the legions (that is, as socii or allies). After adjusting the figures to allow for this, their potential force was about 220,000 iuniores, and 285,000 socii, horse and foot. Of these, two “double” consular armies, each consisting of four legions of 5,200 foot and 300 horse, plus 30,000 socii foot and 2,000 cavalry took the field. In reserve at Rome was a further “double” army of four legions of five thousand or so foot and a total of 1,500 horse, plus socii of 30,000 foot and 2,000 horse.

In addition to fully mobilizing their manpower, the Romans had been stockpiling corn for several years to feed these massive armies, and made huge numbers of missiles and other war material, more than had ever been collected before. As well as their alliance with their former Etruscan enemies, the Romans had further diplomatic success in obtaining the alliance of the Veneti and Gallic Cenomani, thus decreasing the potential of the invaders by one of the largest Gallic tribes. Their combined force amounted to 20,000 men. In addition, alliance with the Umbrian and Sarsinatae peoples of the Apennine mountains mobilized another 20,000 men to the south to threaten the border of Cisalpine Gaul. The Gallic League had to leave a comparable force behind to guard these threats.

In all, Rome had deployed no less than three armies of around 50,800 foot plus 3,200 cavalry against the Gauls, plus an army of – probably – 45,000 Etruscans and 5,000 Sabines with 4,000 cavalry, and 40,000 Northern Italian allies with an unknown number of cavalry. (In addition they continued to garrison Sicily with two legions totalling 9,000 men, likely a Campanian contingent.) This is a total of over 253,000 men mobilized against the Gallic League, whose available invading forces had shrunk to 50,000 or so infantry because of the need to defend Cisalpine Gaul. Polybius gives the Gallic invaders some 20,000 cavalry and chariots, but this is an impossibly large number, and the true number is more likely to be around five thousand cavalry and less than a thousand chariots.

Essentially, the Romans faced a double threat, for the Gauls could approach one of two ways. They might first move down the Po valley and recover the Ager Gallicus, before crossing the Appenines by the route that would later become the Via Flaminia and marching down the Tiber valley to attack Rome. This seemed the likeliest Gallic plan to them, considering the earlier threats to Ariminum. The other alternative was that they would cross the Apennines by one of a number of routes and descend though Etruria by the ancient road that would later become the Roman Via Cassia. This route passed through Arretium and Clusium, then into the Tiber valley, and had been the route used when the Gauls sacked Rome in 387 BC.

To guard against these two threats, the Romans sent one army, 54,000 strong, under Consul L. Aemilius Papus across the Apennines, and then north to take up position at Ariminum, in the middle of the Ager Gallicus. This army would defend the area, and also blocked any approach to Rome down the length of the Tiber valley. The defence of Etruria was left to the Etruscans, bolstered (probably) by a legion of Sabines, also numbering some 54,000 in all, commanded by an un-named Roman praetor, but they had to initially split this force to cover a number of passes leading into Etruria. The defence of Italy was completed by a reserve army 53,500 strong based at Rome. This was a sound plan, for forward defence guarded both possible routes, with a reserve in case either forward defensive army was defeated.

Curiously, the other consul, G. Atilius Regulus was sent to Sardinia with a fleet. Now Sardinia had been thoroughly subdued several times in the 230s BC by a single consular army, and between deaths and deportation as slaves, there will have been hardly a man of military age left there, so to send a “double” consular army seems strange when all Italy was in peril, the more so as Polybius does not mention any trouble there. This argues strongly that the Romans had an offensive plan also, and intended to invade Cisalpine Gaul behind the Gallic army, while their Northern allies attacked from the East. The size of these four Roman forces can hardly be an accident, for each was big enough to take on the Gallic host alone, and argues well for Roman intelligence regarding the size of the invading Gallic army. On the other hand, the Gauls knew that Rome was bigger than she had been in the days when they had sacked it, but evidently had only a vague idea of just how big, nor did they seem to appreciate that all of Italy was being mobilized against them.

This is the end of Part 1. Continue reading in part 2.