“You are not facing a Latin or a Sabine foe who will become your ally when you have beaten him: we have drawn our swords against wild beasts, whose blood we must shed or spill our own.” Attributed to Consul M. Popilius Laenas, fighting the Gauls, 350 BC (Livy 7.24).

In the spring of 225 BC, news of the crossing of the Alps by perhaps 10,000 or more Gaesatae reached Rome and confirmed that matters were coming to a head. The Romans deployed their forces as set out in part 1, and the Gallic host swelled as it moved down the Po valley. The Gauls then pulled a strategic surprise by suddenly turning south and crossing the Apennines, no doubt brushing aside whatever Etruscan force was guarding the particular pass used. This probably brought them into Etruria somewhere near modern Florence, where they crossed the Arnus river and found themselves in Etruria proper, with no foe to face.

They slowly moved south, scattering across the countryside, rounding up people and animals as booty and loading captured carts and ox-wagons with moveable plunder. Meanwhile, the Praetor re-united his scattered Etrusco-Sabine army and set off in pursuit. Some four days later, he caught them up near Clusium, just 85 miles (136km) north of Rome. On learning this, the Gallic host turned back north, eager for glory in battle. The two armies closed, and at sunset were no great distance apart. It being late in the day, both armies camped and lit their fires.

The Gauls resolved on a cunning ruse. They departed silently in the night, leaving their fires lit and their cavalry behind. The cavalry were instructed to wait until daybreak, and then, when visible to the enemy, to lead them south. Meanwhile, the rest of the army took up position in the woods and scrub-covered hills overlooking the valley to the east, and settled into a linear ambush near a town called Faesulae.

At daybreak, the Romans seeing what they saw as a cavalry rearguard, hastened to strike camp and pursue, following the trail left by thousands of horses. As they passed by the ambush, their column was assailed in the flank by the Gauls rushing down from the hills. A stubborn struggle ensued, but the Gauls had all the advantages, and the Etrusco-Sabines broke and fled to a hill in the valley, where they rallied. Some 6,000 had been killed, including wounded too incapacitated to escape. The Gauls surrounded the hill, intending to besiege them if they failed to surrender.

Meanwhile, Consul Lucius Aemilius Papus left Ariminum as soon as he learnt of the Gauls crossing the Apennines, heading south, and then west across the mountains on the route that would later become the Via Flaminia. His seven-day-or-so march brought him to the battlefield just too late to take part. Both Gauls and Etrusco-Sabines knew what his camp fires meant, and the latter sent messengers over the wooded heights.

About now the Gauls finally realised what they were up against – a new army on their heels – and must have reckoned on another army defending Rome. They held a council, at which the war-chief Aneroestes declared that, having captured so much booty, they should not risk fighting again, but should get their booty home safe, and return to fight the Romans another day. No doubt the thought of looting eastern Etruria as well played an unspoken part. After a debate, this course was adopted and once again the Gauls broke camp before daybreak. With wooded heights impassable to wagons to west and east, they were forced to continue south for a day or so, slowed to the pace of the ox-wagons containing their booty, and the speed they could drive herds at.

Aemilius bided his time, cautiously nibbling at the heels of the Gallic host, and doubtless hoping to trap them between himself and the army ahead of them at Rome. When the terrain opened out just north of Lake Volsiniensis, they suddenly turned west and headed for the coast, which they reached in about three or four days, and then turned north up the Via Aurelia. Meanwhile in accordance with the strategic plan, Consul Gaius Atilius Regulus had embarked his army and landed at Pisa, a voyage of around of three to four days with the prevailing westerly/south-westerly Libeccio winds, depending on stops for water, and so on.

A change of plan

As soon as the Gauls turned west toward the coast, messengers sped up the Via Aurelia to Pisa to advise the Consul Atilius, plans changed, and he now immediately marched south. The messengers likely told the Consul of an ideal place to fight the Gauls, if he did not know it already, namely a large defile, just north of Telamon. The Romans also knew exactly where the Gallic host were, and their speed, no more than twelve to fifteen miles per day. Calculations will have shown there was just time to get there and “bottle up” the Gauls. He probably force-marched, and could have covered the 90 miles or so in three days.

Just as the Gauls camped overnight to the south of the defile, the Romans camped perhaps some ten miles to the north of the defile. Hurrying on at first light, the Romans captured some Gallic scouts and learned just how near the Gallic host was – already entering the defile, which surprised Atilius, and that his fellow consul was on their heels. He ordered the tribunes to form the army in line of battle, and advance as rapidly as possible. It was going to be a close-run thing. He himself led his 3,200 cavalry on ahead, for he could see directly ahead of him a hill which dominated the road, which dog-legged around it (see the battle map). 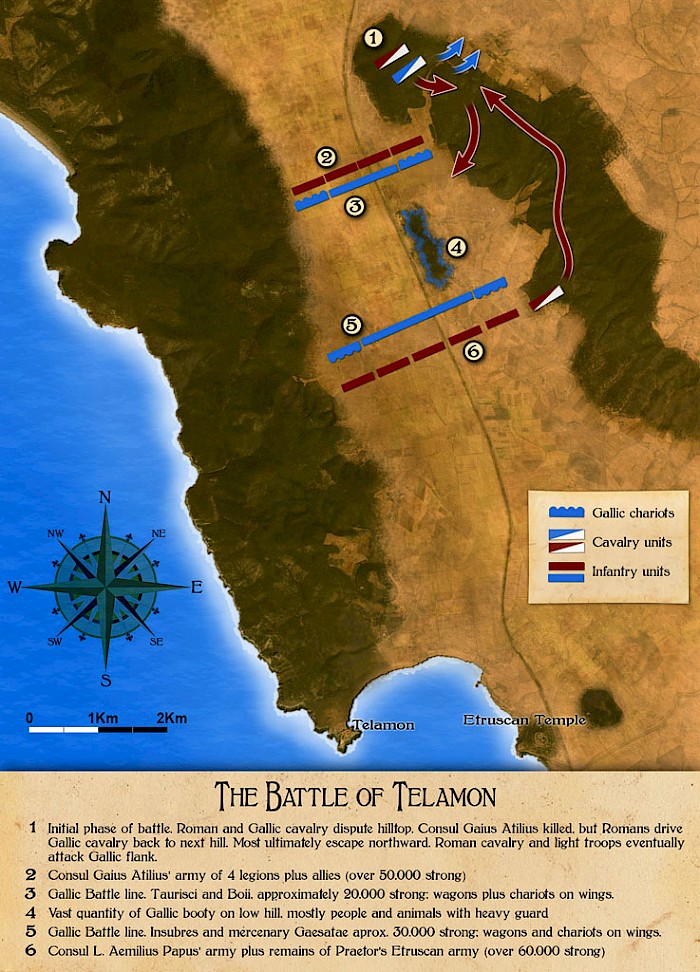 Atilius seized the crest, and the Gauls, still ignorant that any Roman army could possibly lie between them and home, assumed that Aemilius’ cavalry had somehow got around their flank on the other side of the hills and got ahead of them. They sent their own cavalry ahead, probably around five thousand strong, together with light troops, to drive them off and open the way. Captured prisoners revealed the presence of Atilius and his army, which could soon be seen. The Gauls at last realised they were trapped between the wooded and scrub covered hills to East and West. They did the only thing they could, and formed up back-to-back, the Insubres and Gaesatae facing the rear, and the Boii, Taurini and lesser tribes facing the Romans to the north. In order to stretch their line, they placed wagons and their chariots on their flanks. The booty – slaves, herds and laden ox-wagons – was placed under guard on a low hill that skirted the road. The Gaesatae, out of bravado, stood naked along their front line.

The Battle of Telamon

Aemilius had known that his colleague had landed at Pisa, but only now realised he had arrived, when he saw the struggle for the hill. He knew the Gauls had more cavalry than his colleague, and hastened to send his own 3,200 cavalry along the foothills to join the massive cavalry battle and strike the Gallic rear. Atilius in the meantime fought freciously to hold the hill. He fell in the melee, fighting with desperate courage, and his head was triumphantly brought to the Gallic chiefs.

All eyes were on the pell-mell battle for the hill. The infantry forces of the three armies now closed on one another, and it was a matter of some doubt as to who was in the better position, the Gauls back-to-back and thus protected from being attacked in the rear, or the Romans who had their foes trapped. The good order of the Gauls, and the wall of sound coming from their ranks from innumerable trumpets and horns and war-cries terrified the Romans as they advanced, not to mention the cavorting Gaesatae, shrieking and shaking their weapons prominently in the front ranks of the 1.5 mile (2.5km) long front line.

The velites in Aemilius’ army, almost 15,000 light infantry, ran out and started hurling streams of javelins into the ranks of the Gaesatae. Being naked, and with heads and limbs exposed outside their shields they soon began to suffer against an enemy they could not harm, their own light troops being absent with the cavalry in the battle for the hill. In rage and impotence, some groups broke ranks and charged forward suicidally, while most shrank back into the Insubres. Once out of javelins, the velites of both Roman armies withdrew through the ranks and the grim confrontation of heavy infantry began with both sides hurling pila and gaesa (heavy throwing spears), and eventually closing hand-to-hand.

Meanwhile, the battle on the hill had been resolved in favour of the now more numerous Romans, who had driven the Gallic cavalry back to the next hill (see battle map), from where they broke away northward in flight. The victorious Roman cavalry then charged down into the flanks and rear of the Gauls, and the defile became a killing field. The war-chief Concolitanus and ten thousand of the surrounded Gauls were captured. Polybius assumes the remaining forty thousand were all killed, but in reality many thousands likely slipped away up the wooded slopes to either side.

The other war-chief Aneroestes escaped with his household warriors, but from shame they committed suicide. The rescued booty was returned to the Etruscans, the collected spoil sent to Rome, and Aemilius marched north and unleashed the legions on the territory of the Boii, which they pillaged for a few days before returning to Rome, where Aemilius celebrated a triumph. The most serious Gallic invasion ever had been utterly destroyed and Rome itself saved.

The overwhelming victory made the Romans determined to expel the Gallic tribes from the Po valley. Next year, the two consuls would combine their normal sized armies (roughly 45,000 strong in total plus around three thousand cavalry) and invade the territory of the Boii, compelling them to submit to Rome despite setbacks due to severe rain and a consequent epidemic. Subsequently, with the aid of their ally the Cenomani, the Insubres too were subdued, despite them invoking the aid of even more Gaesatae, some thirty thousand.

By 220 BC, the Romans were masters of the Po valley and started planting colonies. Two years later, Hannibal would arrive and arouse the Gauls against Rome once more. The Taurini refused to join, and were made an example of by Hannibal. Just 8,000 infantry and 4,000 cavalry, mostly Insubres, managed to join Hannibal before the battle of the Trebia. After “liberating” the Po valley, Hannibal’s Gauls swelled to 20,000 infantry and 4,000 cavalry, but this was still but a fraction of the fighting power of Cisalpine Gaul before Telamon and its aftermath, which had broken their military power forever.

What sticks out in this campaign is the Roman ability to deploy four massive armies, each the size of the Gallic host, over hundreds of miles apart, and to co-ordinate their efforts to act in concert: no mean feat of command and control. Interestingly too, the Telamon campaign presages the Roman strategy against Hannibal, for again armies under one consul were deployed for the defence of Italy, while the other consul led an offensive force by sea to attack the enemy’s rear base, this time Spain. The Romans also tried to trap Hannibal between two armies a number of times, and their eagerness to do so led to the disaster at Lake Trasimene. The ambush there also duplicates the Gauls victorious ambush at Faesulae. Having found a successful strategic formula, the Romans evidently saw no reason to change it until forced to.

This was the second and last part of an article on the Battle of Telamon. If you haven’t already, read the first part of this feature.