When we think of war chariots we tend to think of ancient kingdoms, such as the Sumerians, Hittites and particularly the Egyptians. After all, the most famous chariot battle, that of Kadesh, was fought between Egyptians and Hittites around 1300 BC. But chariots were also used as far east as ancient China. They were regarded as a symbol of status due to the cost of procuring and maintaining them. These ancient war chariots are sometimes considered the “tank” of the day, despite its relative frailty.

The ancient Chinese war chariot was used for attack and pursuit, plus mobile command from about 1200 BC (the Shang Dynasty). Chariots could be a potent weapon on the wide-open spaces – the plains and fields – of ancient China. They also afforded greater mobility to foot soldiers armed with daggers and axes (an early form of armoured personnel carrier). The use of chariots is believed to explain Chinese success in battle. Ancient Chinese wars were chiefly wars of unification, expansion and defence between warring dynasties.

Chinese sources date the introduction of the war chariot to the Xia Dynasty and its minister Xi Zhong, with references to the Battle of Gan in the 21st Century BC. Little is known about this period. The earliest known archaeological evidence is a chariot burial unearthed in the 1930s and dated to the twelfth century BC (the later Shang Dynasty). There are also contemporary inscriptions from the same period, which show chariot-like two-wheeled vehicles, with a single pole for horses to be attached.

Chariots reigned supreme until the end of the Zhou Dynasty, the so-called “Warring States Period”, around the fourth century BC, when they began to be superseded by other methods of warfare, notably cavalry and massed ranks of infantry. Chariots continued to be used, however, as mobile command posts, right up to the Han Dynasty, which extended their use to around AD 220. Armoured chariots were still used on occasions much later than the fourth century BC, particularly by the Han, when circumstances were favourable.

Chariots were not just used for the act of war, but could also be used to move supplies, although their light construction would have been a severe impediment on bulk. Like their counterparts from the ancient Mediterranean and Near East, they were also used prominently in victory parades and in royal hunts.

Chariots were typically two-wheeled, with either two or four horses. The main carriage body was around a metre long and three-quarters of a metre wide, with an opening at the rear to provide egress for troops. There was a three-metre-long draught-pole, with a draw-pole attached at right angles to which the horses were attached. Wheels were wooden with a diameter of around about one to one and a half metres, attached to a three metre long wooden axle, secured at either end with a bronze hubcap. Wheels were strengthened over time with increasing numbers of spokes, around eighteen in the Shang growing to as many as 28 in the middle Zhou. 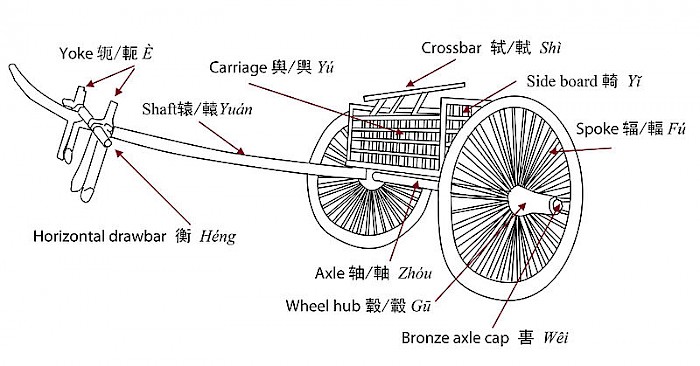 By the later Zhou, improvements to the draw-pole (curved rather than straight) made it easier for horses to pull, increasing efficiency and speed. The width of the carriage had doubled, which afforded soldiers greater movement and flexibility on lines of fire. Key elements, such as hubcaps, were reinforced.

In spite of reinforcement the chariot remained of lightweight construction. This allied with fleet-footed horses gave it a speed, which must have intimidated the opposition on the field of battle. It is said that the chariot was so light, that when unoccupied it could be lifted by one hand.

If the chariot had a weakness, it was that its all-out rush for speed meant that it was denied much in the way of robustness. The chariot was just about solid enough for its occupants and their essential armour and weapons, but it was never strong enough to move bulk around. An army on the move always had supplies to transport, but the war chariot could not double up and help in this regard.

Rather like more modern gun teams the chariot’s crew – usually of three – all had set tasks, namely charioteer (driver), archer (long range attack) and the  rongyou , whose responsibility was close defence. As the carriage body grew in size, the chariot was capable of carrying more than one archer.

The  rongyou  was typically armed with something that sounds very much like our medieval halberd, a ge  or “dagger-axe”, with a three-metre shaft, topped by a sharp dagger on one side and axe head on the other. By the time of the middle Zhou this had evolved into a more recognisable halberd, surmounted with a spear blade.

Some sources state that the three roles comprised driver, warrior, and servant, with the latter’s job being to keep his master alive, which included topping up his supply of arrows. It seems that “master” equated to the archer then and the “servant” to the  rongyou . Other sources believe it was the  rongyou  who was the warrior. In spite of this uncertainty on roles, this still squares with the belief that it was a small core of “warrior elite” who dominated battlefields from their chariots.

The chariot’s crew, especially its commander, would also be armed with bronze daggers, in case they were attacked at close range by the enemy. Armour comprised leather or copper and there were also shields or  dun , made from leather or bronze. By the middle Zhou, the horses themselves had come to be armoured as well, increasing their resistance to attack as well as making them more frightening to the enemy.

The chariot was far more effective when used in large numbers and in conjunction with other forces. As a relatively large and inflexible military vehicle, it was never going to be decisive in battle on its own. The commander of a chariot would usually be allocated a number of infantry ( tu zu ) to co-ordinate with, some of whom would ride shotgun. This complement would be known as a squadron or dui . During the Zhou there was a standard hierarchy for chariots and infantry, which went right up to 100 chariots, known as a  jun  or army, each allied with its own section of infantry. It was this mass attack of chariots and close co-ordination with infantry that made them the main weapon of war during the Zhou.

It seems that by the later Zhou, the effectiveness of the war chariot was being seriously questioned, however, with the ratio of chariot to infantry being increased heavily in favour of infantry. One chariot to seventy infantry, rather than the earlier one to ten now became the norm, as massed ranks of infantry began to hold sway on the battlefield.

For around one millennium, from ca. 1200 to 200 BC, the Chinese war chariot had reigned supreme and all those employed in this technology would have recognised broadly the same tactics. Chariots needed to be employed in wide open spaces, but in order to be effective there had to be a disciplined approach with formation being maintained and co-operation with other forces, particularly infantry, which was normally akin to a feudal levy. There are some good examples of battles where superior tactics forced victory, or where a lack of discipline brought defeat.

Battles would normally start with an exchange of arrows, hoping that a superior fusillade would spread disorder and panic amongst the enemy formations. As the chariot armies closed they would generally stay around four metres apart, avoiding the halberd type weapons employed by the rongyou . It was when this distance closed still further that hand-to-hand fighting ensued. 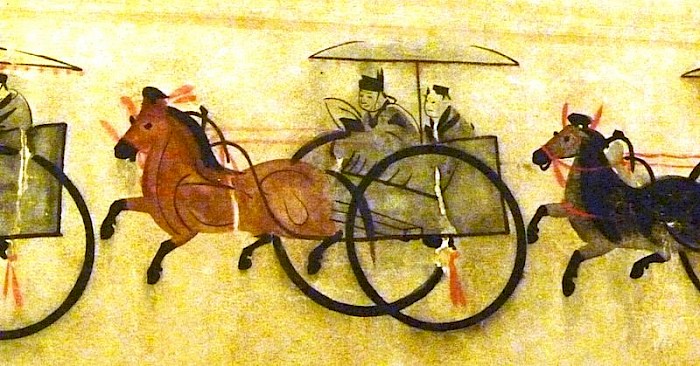 Inflexibility was the chariot’s great weakness, good in a headlong dash toward the enemy, less good if you needed to turn it around. Chariots would become extremely vulnerable to predatory attack if isolated, so in the later Zhou there was more attention paid to co-ordination and troop formations, with combined arms tactics now in vogue.

Close command resulting in re-grouping and consolidation could achieve victory even when outnumbered. At the Battle of Muye (1046 BC) which saw the Shang toppled by the Zhou, China’s longest lasting dynasty, it was the latter’s chariots that managed to stay in formation, whilst the numerically superior Shang were disorganised and consequently defeated. This outcome should come as no surprise for the Zhou were reckoned to be the arch exponents of the chariot (see Gernet), and of massed chariots and were responsible for the improvement to four horses abreast. The writing was on the wall, however, as it had already been proved possible for infantry to outwit and defeat a chariot army and in the later Zhou the first official native Chinese cavalry unit was formed.

Encircling the enemy was the ultimate knockout blow, which could only be achieved by charioteers and supporting troops all working closely together. As with battles in other civilisations and eras, most casualties came when one line or other broke and a disorderly retreat turned into a rout. This is when the chariot as a pursuit vehicle really came into its own.

The Qin Dynasty (of “Terracotta Warrior”-fame) refined the old dagger-axe into an eighteen-foot-long pike, which cannot have done the war chariot’s effectiveness any good at all, as it would never get within range. By the time of the Han Dynasty, around the second century BC, cavalry and infantry working together had largely superseded the chariot. There was still a place for a larger chariot, being used as a heavy supply vehicle, made possible by the development of the double-shaft chariot. It was something of a dip in fortune, to put it mildly, for the once mighty war chariot, now relegated to a secondary support role.

Developments that condemned the chariot to a support role included the discovery and utilisation of different breeds of horse during the Qin and Han (hence cavalry taking over), as well as the refinement of the pike for infantry. The Chinese were ahead of the game as usual. Whilst the chariot continued to have prominence in other parts of the world to around 400 AD, the Chinese had already decided on its obsolescence. At the same time, it was during the Qin/Han Dynasties that China conquered territories in all directions, giving it both a unified kingdom and borders similar to what we know today.

The Chinese war chariot may have become obsolete in the process, but the golden age of Chinese history was about to start.

Picture credits  : photo of the Chinese mural showing a landlord in a procession of chariots with guards and attendants by  John Hill  via Wikimedia Commons; dated ca. AD 25 to 220. The diagram is also from  Wikipedia Commons  and was released into the public domain.