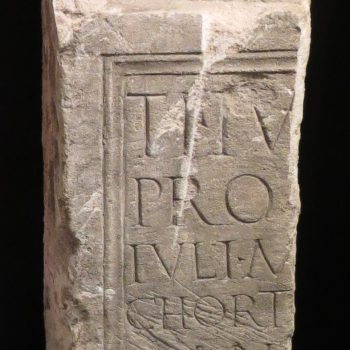 A while ago I talked on this blog about the Cohors Nauticorum, a naval unit apparently raised from the fleet in Forum Iulii in the Julio-Claudian era. Interestingly, from roughly the same area comes another, apparently similar cohort, the Cohors Classica. Inevitably, researchers have suggested they go together (such as Spaul in Cohors 2), but I don't think so. Instead, I would argue that this unit originates in the final years of the conquest of Spain. We just recorded (another, don't ask...) episode of the podcast on that very old issue, which reminded me.

There's a simple reason why this unit has been connected to the Cohors Nauticorum - several members of the Cohors Classica were from Forum Iulii. Yet there is no evidence the unit served there. The oldest tombstones, presumably set up where the soldiers died, come from southwestern France, the provincia Aquitania. What were they doing there?

The ancient authors Florus (2.33.49) and Orosius (6.21.4) provide a, very succinct, clue. They tell how the Cantabrian tribes, under attack from land, did not get any peace from the Ocean either. Apparently they were being raided from the sea. In that case, Aquitania would be the logical base for such operations. Moreover, while it's possible the fleet in Forum Iulii sailed all the way around the Iberian Peninsula, building transport ships on the spot was equally possible.

We know of Legiones Classicae from the civil wars, apparently raised for service aboard ship. Would it not be likely then that this Cohors Classica was raised for similar service in the Cantabrian campaign? In contrast to the soldiers of the Cohors Nauticorum the men of our unit were all Roman citizens: in the oldest inscriptions the soldiers have a full tria nomina, filiation and tribus. That makes them of a higher status and more likely to have been actual soldiers (instead of sailors or rowers).

Unfortunately, neither Orosius nor Florus gives us more information. The unit clearly did not stay in the area for long. It appears in Germania Inferior in the first century AD, possibly working with the fleet there (whether it had already been formalised as the Classis Germanica is a discussion for another time), but it seems to have transitioned into a 'normal' auxiliary infantry unit fairly quickly. The unit is attested well into the second century from roof tiles, several tombstones, and is listed in diplomas from the province.