The empires of Persia

After nearly ten years of Ancient Warfare, it’s surprising the number of topics that we still haven’t covered properly. Issue X.5, which will be returning from the printer’s shortly, is devoted to the empires of Persia. Earlier issues of the magazine did, of course, touch upon the Persians, Parthians, and Sassanids, but they have never had an entire issue to themselves. Until now. 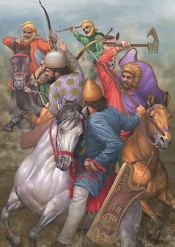 I’m never entirely sure what an issue will look like until I start sifting through the proposals. Most of these were concerned with Achaemenid Persia, but I thought it was important to also devote some space to their successors. The end result is an issue that covers about a thousand years’ worth of history, and there’s ample material left over to easily fill an issue or two in the future.

Cristian Violatti wrote the historical introduction, which sets the scene for the rest of the issue. If you read it, you’ll also come across a beautiful reconstruction of Persepolis created by Rocío Espin. Jona Lendering provided helpful advice and references for the picture.

For this issue’s ‘Source’ article, Daan Nijssen tackles something that is relatively obscure: the Achaemenid roots of Iran’s national epic, Ferdowsi’s Shahnameh. It’s only three pages (as the ‘Source’ tends to be), but it’s fairly heavy going, with a wealth of names. Still, I think that you’ll find it interesting, as it offers a glimpse in how history might influence oral traditions.

Sidney Dean’s contribution to this issue is devoted to Cyrus the Great, the founder of the Achaemenid Empire, with whom Persian history proper begins. Angel García Pinto’s illustration gives a vivid idea of what one episode during the Battle of Hyrba (553 BC) might have looked like. Murray Dahm then takes us further west and writes about Artemisia of Halicarnassus, one of the few female commanders known from the ancient world. A brief article by first-time writer Steve Christian-Noonan deals with Aeschylus’ play The Persians. 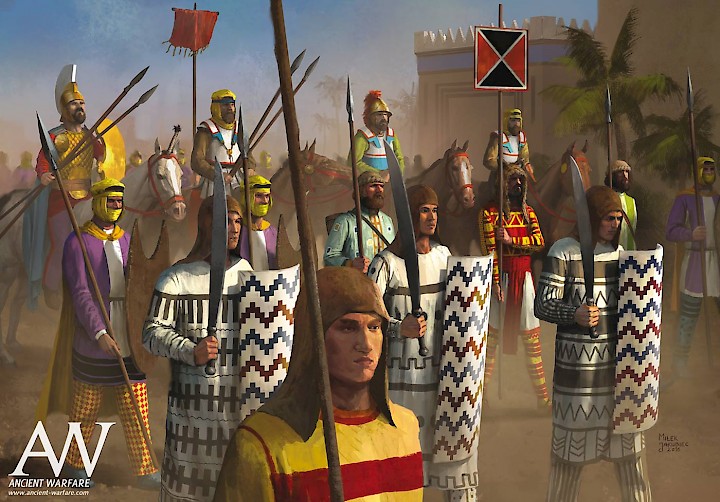 We then move into a few articles devoted to the Persian war machine. Rob Holmes’s contribution deals with the scythed chariot and features an illustration by Sergey Shamenkov. Arnold Blumberg deals with the Achaemenid Persian army, with the centrefold by Milek Jakubiec giving an idea of what the army might have looked like on parade.

Konstantin Nossov, an expert in ancient fortifications, moves us forward in time and deals with Dura-Europos (i.e. Fortress Europos). The article is lavishly illustrated with a large number of his own photographs taken at the site. Because it is so well preserved, it has been called ‘the Pompeii of the desert’. Finally, new writer Alex Stover deals with Sassanid archers in an article that sort of anticipates issue XI.1, which will deal with archery in the ancient world.

I’ve already written about ‘Graphic History’, the new department that has been added to Ancient Warfare. It features a one-page comic drawn by artist Fausto Bica about an anecdote featuring Alexander the Great. Regular contributor Joe Hall has written an article on Roman violence, with a beautiful illustration by Azat Kuzhin. New writer Robbert Bleij writes about the erperience of Roman heavy infantry on the battlefield: certainly of interest to all Face of Battle fans.

Finally, this issue’s ‘Hollywood Romans’ article is written again by David Reinke and deals with the 1960s movie The 300 Spartans. If you don’t know the film, you may be interested to find out that it exerted a heavy influence on Frank Miller, who would go on to create the comic that the movie 300 was based on.

You can (pre-)order the latest issue now in our webshop.