The fiftieth issue of Ancient Warfare

It’s finally done! Issue IX.4, the fiftieth regular issue of Ancient Warfare to be published since 2007, is now off to the printer’s. Normal issues of Ancient Warfare weigh in at 60 pages, but this one is 84 pages. The theme fits, as this issue deals with the First Punic War, which is widely considered the largest conflict of the ancient world. In other words, you can look forward to reading an extra-thick issue of Ancient Warfare filled with ships, naval engagements, war elephants, and land battles. 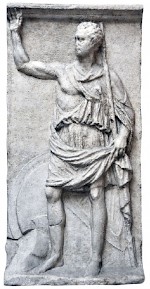 Newcomer Cristian Violatti wrote the historical introduction, and it nicely frames the rest of the issue. It also includes a beautiful map created once again by Maxime Plasse. It is, as always, followed by a ‘Source’ article, this time written by Tilman Moritz about Fabius Pictor. Fabius wrote an important history that has now largely been lost, but it served as an important source of information for later historians, such as Polybius.

Christa Steinby has written an article about the ships used in the First Punic War. It includes two diagrams by Julia Lillo, detaling quadriremes and quinqueremes. The following two articles deal with war elephants. Jean Luc Féraud’s ‘Reenactor’ piece includes a great photograph by Yann Kervran that showcases a number of soldier, with the centrepiece being an actual elephant. Seán Hußmann’s ‘Behemoths of the battlefield’ goes into further detail and features a full-page illustration by Mirco Paganessi. You can look forward to more of Mirco’s work in upcoming issues of Ancient Warfare. 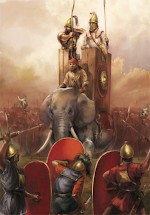 Regular contributor Sidney Dean next deals with the Battle and Siege of Agrigentum, 262–261 BC. Angel García Pinto created an illustration with portraits of three Roman and three Carthaginian soldiers to accompany this piece. We then briefly return to sea with Michael Taylor’s brief article on the Egadi Rams, which were recovered from the seafloor off the coast of Sicily.

Robert Holmes offers a change of pace with an article on battle speeches of the First Punic War. Finding pictures were a real challenge for this article, I can tell you! Fortunately, Rob was resourceful and helped out tremendously in this regard. The feature article was written by regular contributor Joe Hall and deals with the Sea-Battle of Cape Ecnomus. The dramatic centrefold was created by the ever-talented Radu Oltean; a series of battle maps were made by Julia Lillo. Marc DeSantis contributed a text box on the corvus.

The next article was written by Arnold Blumberg and deals with the Battle of Tunis (255 BC), which was the only land battle that the Carthaginians managed to win. A full-page illustration by stalwart Milek Jakubiec illuminates this contribution. Next is a short two-page article written by yours truly about a beautiful cuirass found in a Punic grave and recently exhibited in Leiden. 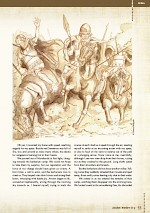 Then, it’s time for a change of pace! You may remember the short story competition we ran last year. Our panel of esteemed judges sifted through the submissions (nearly 40 of them!) and picked a winner: Marcus Pailing. His short story, ‘We left our dead at the Polytimetos’, is included in this issue of Ancient Warfare and illustrated throughout by Simon Walpole. I think it’s a great piece of creative writing and I hope that you’ll like it, too. Be sure to tell me either way! 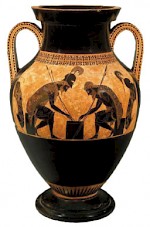 The first of the non-theme-related articles is an article by Wassilis Stephan Linidis about how he developed his reconstruction of an extra-heavy Archaic Greek hoplite. Then, there’s a Debate article that is a little different from usual. Dr Jason Crowley, author of The Psychology of the Athenian Hoplite: The Culture of Combat in Classical Athens (2012), and regular contributor Owen Rees discuss the (non-)existence of PTSD in ancient Greece. Owen sides with the universalists and argues that PTSD did exist in Greece, while Jason adopts a relativist position and argues that the conditions under which the ancient Greeks fought were very different from those of modern soldiers and that, because of this and cultural differences, they did not suffer from PTSD. I’ll be curious to see what side of the debate you land on after reading it, because I thought they both made perfect sense!

Graham Sumner wrote the next instalment in the series ‘Hollywood Romans’. Graham discusses Qua Vadis from 1951. As in his previous article (published in Ancient Warfare IX.2), Graham includes a full-page illustration depicting two soldiers from the movie in their costumes. Then there are a few reviews (including one by our other ‘Hollywood Romans’ writer, David Reinke), followed by the ‘On the cover’ piece by Mike Chaly.

If you’re a subscriber, the issue should return from the printer’s about the middle of next month and then be sent through the mail. If you’re not a subscriber, you can, of course, subscribe via our webshop. You can also pre-purchase this issue directly.