Something I didn’t mention in my discussion of 2010’s Clash of the Titans, is that the movie actually provides some background information on Medusa that makes her more than just a monster to kill. When Perseus and his band of adventurers cross a river, Io (Gemma Arterton) – in her role as Miss Exposition – tells them who Medusa was.

‘Medusa was beautiful once,’ she says. ‘So beautiful as to tempt Poseidon. When he came for, she ran for Athena’s temple, thinking the goddess would protect her. She didn’t. Poseidon took her on the cold floor. She prayed to Athena for comfort, but the goddess felt nothing but disgust. She made sure no one would ever want Medusa again. One look at the creature she has become will turn any living thing to stone.’

I don’t think the way this was inserted into the movie worked very well. As always, exposition tends to slow things down, especially when done in this fashion. In the movie, Io telling the story is intercut with shots of the other actors either looking at her or contemplating what she’s sayingm, with everyone standing in place. It’s visually not very interesting (compare, for example, the exposition spouted by Michael Biehn’s character in Terminator during a chase sequence).

In any event, what is interesting is that the story is based entirely on something from the ancient world, namely Ovid’s Metamorphoses (4.790–803). The only thing that the movie omits from the original tale is the fact that Medusa’s hair was changed into coiling snakes to enhance her fearful appearance, but this is obvious when we finally see her.

Earlier sources do mention that Medusa slept with Poseidon, but the idea that she had ever been anything but a monster is probably no earlier than Ovid or Pseudo-Apollodorus. It was because of her liaison with Poseidon that she brought forth both Pegasus and Chrysaor when Perseus chopped off her head, with her offspring entering the world through the wound in her neck.

In the movie, the face of Medusa was made after Russian supermodel Natalia Vodianova; only when she attacks does she actually look like a monster. In ancient Greece, there were several ways that artists could depict gorgons. One of the earliest images comes from a Boeotian relief amphora of about the middle of the seventh century BC and depicts Medusa in the form of a centaur.

It was also common for artists to depict gorgons with wings, which would have made Perseus’ escape from their island a more difficult affair if he hadn’t worn the helmet of invisibility. Here’s an example from a fragmentary Attic Siana cup (ca. 560–550 BC) that I saw when I visited the archaeological museum of Rhodes: 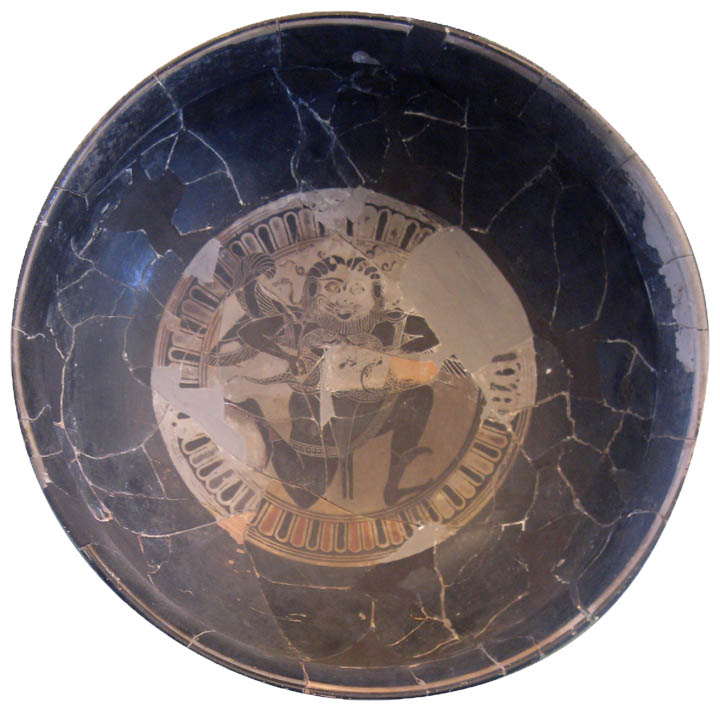 Athena fixed the head of Medusa to her Aegis and also added the snakes to the edge to give it a more terrifying appearance. Of course, in real life, ancient Greeks painted gorgons, with wild hair and lolling tongues, on their shields, and added heads of gorgons to other pieces of kit, including greaves. Robert Holmes wrote an article on that subject for Ancient Warfare issue IX.1, which you might want to give a read.