Ah, the Greek hoplite shield. I could write an entire book on the subject. The term ‘hoplite’ itself is problematic: it refers to a heavily-armed warrior with shield and spear, but that’s about it. It isn’t used before the fifth century BC, so referring to pictures of heavily-armed warriors on Greek vases as ‘hoplites’ is actually anachronistic. Then there’s loads of modern authors who define the term as ‘citizen-soldier’, which opens up an entirely different can of worms, not least of which etymologically (since a soldier is technically someone who fights for pay).

Then there’s the assumption that ‘hoplites’ are always ‘Greek’. One can look at the Amathus Bowl in the British Museum and conclude that those guys with round shields, helmets, and spears are ‘hoplites’. But the bowl itself is Phoenician in origin and was found on Cyprus. They might indeed be Greek mercenaries, but they may just as well be local troops equipped in a similar manner. Indeed, Herodotus even suggested that most characteristically ‘Greek’ elements of the ‘hoplite’ panoply were invented by Carians! And there are pictures of similar people from Phrygia that date to the ninth century BC and therefore predate the earliest Greek depictions of hoplites.

Another issue that doesn’t seem to want to go away is the Greek term used to denote the shield. All too often, I see people refer to the ‘hoplite’ shield as a hoplon. But hoplon is the general term to denote equipment: the Spartan poet Tyrtaeus refers to heavily-armed men as panoploi (‘all equipped’), and the word was actually seldom used to denote a shield specifically. John Lazenby and David Whitehead dealt with this issue exhaustively in their article ‘The myth of the hoplite’s hoplon’, published in Classical Quarterly 46 (1996), pp. 27–33. The Greeks were, in fact, hopelessly inexact as far as terminology was concerned: any shield, regardless of type, could be referred to as an aspis.

Of course, when I wrote that I could write a book on the subject, I was being a little facetious, as I in fact did write a book on warfare in Greece from the Mycenaean era down to the Persian Wars. It’ll be two years this November since Henchmen of Ares was published. It’s been selling well and I occasionally get sent emails with questions regarding aspects of the book. Recently, someone asked for clarification on something that I wrote on page 109.

The passage deals with the date of the introduction of what we can refer to simply – if again somewhat anachronistically – as ‘phalanx’ tactics. I believe the shift from mass tactics to massed tactics can be traced archaeologically by the appearance of a number of different things, including trumpets, open-faced helmets, and a new type of sword.

I also point to the appearance of a new feature on the inside of the ‘hoplite’ (or Argive) shield. The typical hoplite shield is about a metre across and hollow, with a pronounced rim. You thrust your left arm through the central grip or porpax and grasp the handle or antilabe, located near the rim, with your left hand. Because of its shape, you can rest the shield on your left shoulder and the weight is distributed across your entire arm.

Now, the funny thing is that from the later sixth century BC onwards, in Greek painted scenes on pots, we often see shields that have two hand grips: one where the left hand should go and another one on the opposite side; there is often some sort of cord running along the inner edge of the shield that connects both handgrips. A picture says more than a thousand words, so check out this portrait of Achilles from the Royal Museum of Art and History in Brussels – which is also reproduced in Henchmen of Ares – for an example: 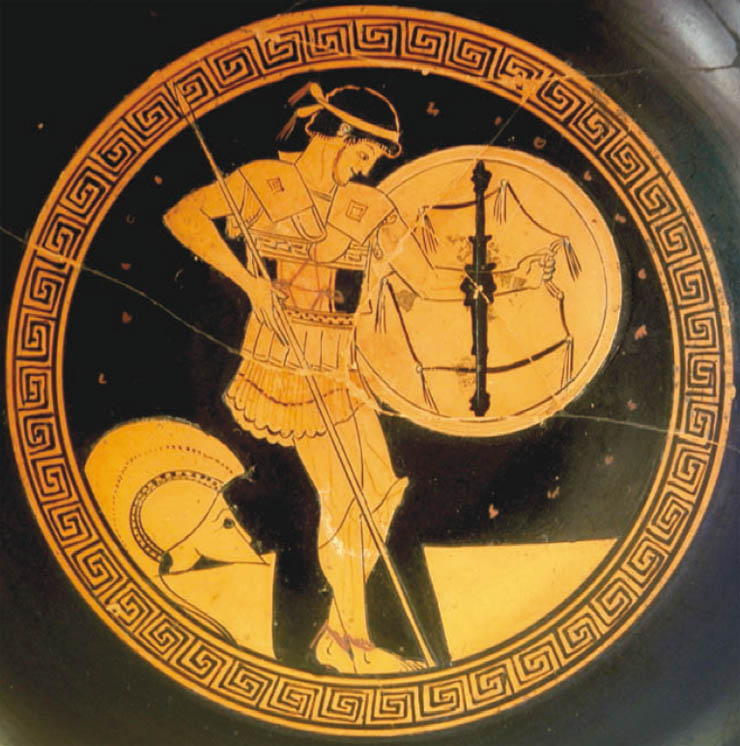 In the text, I cite Allen Pittman who, in his paper ‘“With your shield or on it”: combat applications of the Greek hoplite and spear’, published in Barry Molloy’s (ed.) The Cutting Edge (2007), pp. 64–76, argues that the spare handle at the left-hand side of the shield (when viewed from the inside) was actually held by the man immediately to the bearer’s left. In other words, you could form a kind of shield wall by grabbing the left handle of the shield of the man to your right with your left hand, instead of holding on to the antilabe of your own shield. In this way, your shield would overlap the left side (viewed from the inside) of the man to your right.

I always thought that was an ingenious way to explain the presence of two handgrips on the inside of these shields, hence my inclusion of this in my PhD dissertation and, by extension, the book. Pittman conducted experiments with this and it seems to work fine.