The Hittites and their successors

It’s hard to believe but another two months have slipped by since the release of our issue on the Theban ascendancy. Issue IX.3 has gone to the printer’s and, as I also note in the editorial, it’s one of those issues that don’t deal with the Greco-Roman world. The theme is devoted to the Hittites primarily, but there are also a few articles on Anatolian peoples of the Iron Age, and therefore has a relatively broad scope.

Egyptologist Arianna Sacco returns to Ancient Warfare and has penned this issue’s historical introduction. She first explains briefly how the Hittites were discovered, before going into the history of the Old and New Kingdom periods, with a particular emphasis on the rulers. Maxime Plasse’s gorgeous map, on page 7, should help you in locating places and regions mentioned in the issue as a whole, freely mixing the Bronze Age (Apasa, Arzawa, Hattusa) with the Iron Age (Ephesus, Phrygia, and so on).

Sean Manning wrote this issue’s ‘Source’ article on a tablet called the ‘Guards’ Rule’. The tablet includes rules and regulations for how the soldiers were supposed to behave. As one proofreader commented, this article features what is perhaps the best opening in any issue of Ancient Warfare to have appeared so far. (If you’re curious about that, you’re just going to have to buy the issue or subscribe. Sorry.) Interestingly, the Guard’s Rule shows that military traditions have been more or less the same throughout the ages.

Konstantin Nossov also returns to Ancient Warfare with a great article on Hittite fortifications. As always, his article is illustrated with photos and drawings; I really like Vladimir Gobulev’s diagrams of the Yerkapi Rampart at Hattusa on page 16. Steven Weingartner’s contribution deals with a series of clay tablets referred to as the ‘Kikkuli Text’. Kikkuli was a horse master from Mitanni and the tablets contain surprisingly modern instructions for training horses. 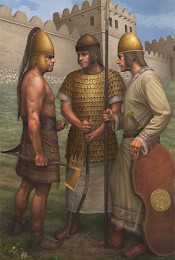 The largest article in this issue has been written by Ancient Warfare stalwart Sidney Dean and deals with the Hittite war machine. It includes a great illustration by the talented Angel García Pinto that depicts three different Hittite warriors. The centrefold for the issue is a little different from what you may have come to expect. It has been drawn by the great Rocío Espín and gives a wonderful impression of what the Hittite capital of Hattusa must have looked like in the late thirteenth century BC.

Moving beyond the Hittites, Erich B. Anderson has contributed an article on the ‘Last of the Neo-Hittites’, with a heavy emphasis on the rise of the Neo-Assyrian Empire. Angel García Pinto again contributed an illustration, which depicts the agents of Awariku captured by Phrygian soldiers. Robert Holmes rounds off the themed segment of the issue with a short article on the ancient Greek tradition that the Carians invented part of the hoplite panoply.

As regards the non-theme-related articles, Marc G. DeSantis has written an article about Octavian’s disastrous expedition to Sicilian. Duncan B. Campbell, in his article, seeks to answer the question, ‘What did the ballista really look like?’ He was able to call upon the talents of Julia Lillo to create a set of diagrams depicting different types of ballistae and a catapult. David L. Reinke returned to write this issue’s instalment of ‘Hollywood Romans’ and shines a light on the 1963 movie Cleopatra.

As always, working on a non-Greco-Roman issue is a challenge as well as a delight, and I hope that you will enjoy reading the issue once it has returned from the printer’s and made its way to either your local bookstore or, indeed, your letterbox.