The labours of Theseus

The British Museum in London has an Attic red-figure kylix (cup) that depicts some of Theseus’ most famous deeds. It was found in Italy, at the Etruscan site of Vulci, and dates to ca. 440–430 BC. Here is a photo of the object, taken from Wikimedia Commons (as my own picture of the object isn’t nearly as clear!): 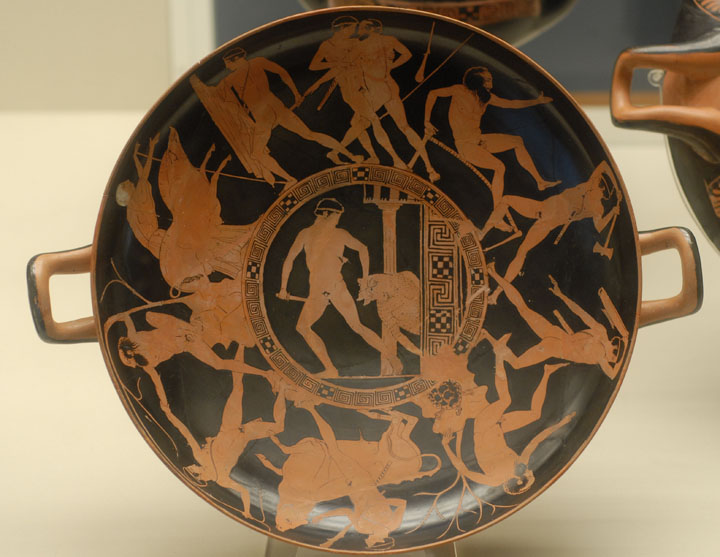 In the centre, we see Theseus dragging the Minotaur from the Labyrinth. He has his sword in his right hand and will probably use that to decapitate the creature. Slaying the Minotaur is the pivotal moment in Theseus’ career as a hero and therefore placed centrally on the inside of the cup. It is probably also the earliest of Theseus’ exploits, as there is little evidence for much of the rest of his story that pre-dates the fifth century BC.

Along the edge of the inside of this cup we see short scenes from Theseus’ other exploits. There are six in total, one for each of the Labours that he accomplished on his way from Troezen to Athens. These Labours were probably invented to make Theseus more easily comparable to Heracles. Heracles was, in essence, a Dorian hero, and the Athenians wanted an Attic hero to call their own, and thus ascribed Theseus many of the characteristics of his better known counterpart.

We’ll start at the left handle and proceed in a clockwise manner. The large pig depicted there is the Crommyonian Sow; the elderly woman behind it is her owner, called Phaea (as per Pseudo-Apollodorus). The sow had been wreaking havoc in the lands between Megara and Corinth, near the village of Crommyon, and Theseus destroyed it, no doubt much to the chagrin of Phaea. (The British Museum claims that the elderly woman is either the personification of Crommyon or a wood-nimph; neither makes much sense to me.)

At the top we see Theseus engaged in a wrestling match with Cercyon, the son of Poseidon (according to some sources), and King of Eleusis. Cercyon challenged those who passed through his kingdom to a wrestling match, promising to give his kingdom to whoever would win from him, while slaying the loser. Theseus was the first to beat him and thus became king of Eleusis. The story helped to explain why Eleusis was a part of Attica rather than an independent city.

Near the right handle, we see Theseus about to plant a double-axe into Procrustes. Procrustes was a bandit who dwelled in the area between Eleusis and Athens. He would invite people to spend the night in his bed (depicted here, too). However, no one would ever fit the bed exactly. People who were to short were stretched to make them fit, and people who were too tall would have feet and legs amputed by the evildoer. Theseus finished him off.

Next, we see Theseus about to kill Sciron. Sciron was another bandit, who lived on the Isthmus. He robbed people who passed by and forced them to wash his feet, at which point he would kick them over the cliff and into the sea, where they were devoured by a giant sea-turtle. We are probably to imagine that Theseus will knock Sciron off the rocks and into the sea, where he would suffer the same fate as his hapless victims.

At the bottom we see Theseus and the Marathonian bull, which I already discussed yesterday. Moving to the final labour, we see Theseus dragging Sinis away from a tree. Sinis was another Isthmian bandit, who asked travellers to help him bend down a pine tree. If the traveller helped him out, he would suddenly let go of the tree, either catapulting the victim into the air and towards his death or tearing them apart (hence his nickname, Pityocamptes: ‘pine-bender’).

The Labours are not depicted in their proper order; the vase-painter instead tried to create a composition that was pleasing to the eye. Note how, on the right side in the picture, the positions of Procrustes and Sciron echo each other, as both have fallen backwards, while Theseus stands before them with a weapon raised above his head. Likewise, at the top of the picture, Theseus wrestles with a man, while below he is shown in a struggle with the Marathonian bull.