The Legend of Hercules (review)

Ever since the release of Gladiator, back in 2000, we are fortunate to get a steady stream of movies from Hollywood that are set in the ancient world. Sadly, few of these movies get everything right. Gladiator itself is rife with errors, from Roman cavalry using stirrups to the observation that Rome was founded as a republic. And don’t get me started on the grammatically incorrect exclamation “Roma victor!” (Roma is feminine, not masculine).

Historical inaccuracies do not necessarily make a movie bad. 300, for all its faults (see my earlier blogposts), still works as a visually engrossing and entertaining piece of fiction. There is more to making a movie good or, at the very least, entertaining than just sticking to the historical “facts”, whatever those may be.

Nevertheless, there are a few movies set in the ancient world that are downright rubbish. One of these is the relatively recent Legend of Hercules (2014), directed by mediocre film maker Renny Harlin and starring Kellan Lutz, who does his best to infuse the famous Greek hero with all the charisma and personality of a piece of wood.

Note, this review contains some spoilers.

The Legend of Hercules opens with an amphibious assault on Argos in “1200 BC”. The costumes, ships, weapons and armour, are a kind of pastiche, a mix of actual Greek artefacts (usually from the Archaic or Classical periods) and fantasy elements. The design very much takes its cues from movies like 300(2007), but with less panache. Thus, we are subjected to scenes of men with Corinthian helmets and red capes, running or riding on horseback toward a city with Bronze-Age-style fortifications. Troy (2004) did a better job mixing different cultures and periods to create the impression of a long-lost Age of Myth.

I won’t go into great detail as far as anachronisms and archaeological inaccuracies are concerned, since I think most readers of Ancient Warfare will be able to recognize them, including the ridiculous overuse – as always! – of leather armour. But one point does stick out, and that’s the infusion of Roman elements in this ostensibly “Greek” movie.

Lay people seem to have great difficulty in distinguishing ancient Greek culture from ancient Roman culture. For instance, they are usually unaware of the differences between, for example, Greek and Roman temples or theatres. The makers of The Legend of Hercules seem to suffer from the same affliction, even showing a Roman amphitheatre at one point (around the 52-minute mark)! Hercules himself doesn’t look particularly Greek: his closely-cropped hair seems a better fit for a Roman soldier than an ancient Greek hero. Of course, the makers of this movie also chose to use the Latin version of the Greek hero’s name, rather than the Greek one (Herakles or, Latinized, Heracles). 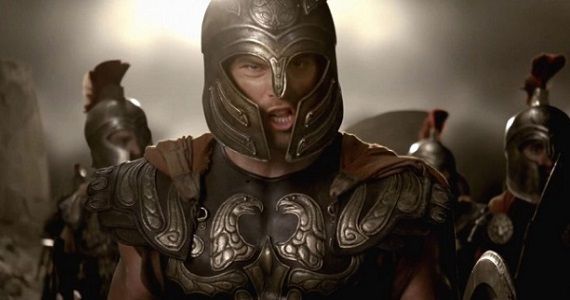 Just as in the case of Troy, the moviemakers here attempt to historicize Hercules somewhat. Hence, characters like Chiron, who was originally a Centaur, are presented as regular mortals. The gods do appear, but not in physical form: Hera is channelled by a priestess and Zeus appears in the form of thunderstorms. In the original stories, the Greeks had no problem with the gods being physically present and mingling with mortals, and one wonders why modern moviemakers seem to have a hard time coming to terms with this (films like Clash of the Titans notwithstanding).

One interesting point is that Hercules is, initially, known by his original name, Alcides (some ancient sources give his name as Alcaeus). His better known name, Hercules, means “Glory of Hera”, and refers to the glory that the hero managed to achieve as a result of all the challenges that Hera posed him, most famously the Twelve Labours.

Early on in the movie, Hercules and his brother Iphicles, run across what they refer to as the “Nemean Lion”. It isn’t clear that they are near Nemea and I have the impression that the makers didn’t know Nemea is an actual place. The lion, by the way, is one of the most laughably bad computer-generated creatures that I have seen in a long time. Anyway, in myth, the Nemean Lion’s skin could not be pierced by any weapon, so Hercules strangled it instead. The moviemakers, to their credit, incorporate this element, but the way that the sequence is shot makes it look silly rather than heroic.

Later, Iphicles and Hercules return home to Tiryns, with the former wearing the skin of the Nemean Lion. (In reality, of course, it would have taken more than a few hours to skin the animal and prepare the hide for use as an item of clothing.) Here, things come to a head as Amphitryon announces that Iphicles will marry the Cretan princess called Hebe (Gaia Weiss), who has in the meantime fallen in love with Hercules. (In Greek myth, Hebe was the goddess of youth and married Hercules after his apotheosis.)

Needless to say, this leads to complications. Hercules and the girl try to flee, but they are soon captured. Our hero is then sent away on an expedition to Egypt. There, he and his men are ambushed and everyone is killed aside from Hercules and his friend, the commander of the “battalion” sent to Egypt. The Egyptian soldiers or, as they later turn out to be, mercenaries are almost completely drawn from fantasy – the only vaguely correct elements of their panoplies are some of the shields and their sickle-swords. 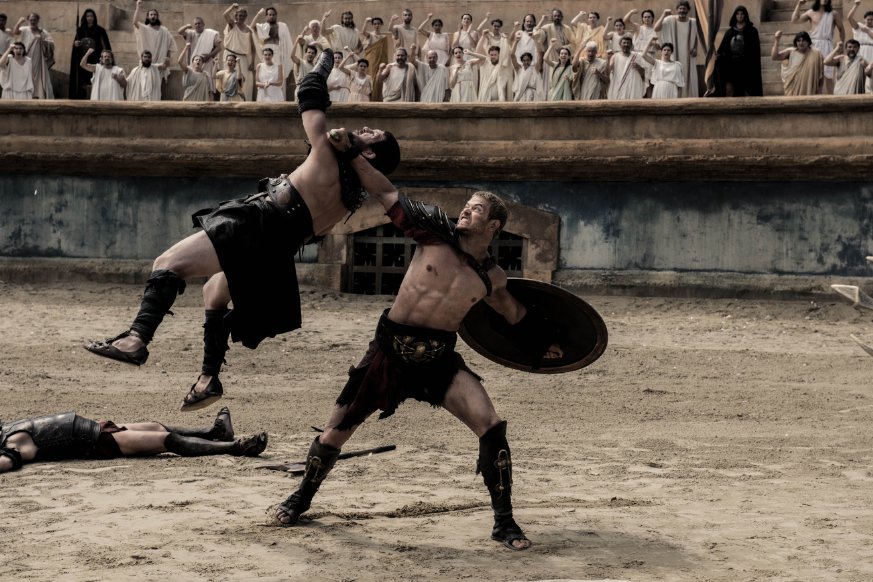 Hercules and his friend are taken captive and sold as slaves. Our hero eventually ends up in a makeshift arena in Sicily as a gladiator. If at this point you are shaking your head in disbelief, rest assured that you are not the only one. The ancient Greeks did engage in single combat as a sport (see this blog post of mine), but gladiatorial combat is, of course, another characteristic element of Roman culture. By recasting the story of Hercules in this way, the movie turns into a silly retread of Gladiator. If only we had some ancient stories to base the movie’s script on, right?

An example of the lazing plotting in this movie is that Iphicles has to wait “three moons” before marrying Hebe. This makes little sense, since there is no reason for Hebe – let alone her father, the king of Crete – to linger so long in Tiryns before getting married. The sole reason that they don’t immediately get on with it is, of course, to give Heracles time to return to Tiryns.

To cut a long story short, Heracles and his friend eventually make it back to the Argolid. Here, Hercules is reunited with Hebe, which allows the actors to exchange some blank stares and poorly delivered lines, obscuring their total lack of actual chemistry. There is some treachery and the plot carries on as expected, with Hercules eventually emerging triumphant and still capable of spouting off some of the most laughably bad dialogue this side of Tommy Wiseau’s The Room (2003). His comically evil stepfather and brother are, of course, killed along the way, with Hebe employing a method of murdering Iphicles that was previously used by fictional detective John McClane (Bruce Willis) in Die Hard 4.0 (yes, that is the level that this movie operates on). 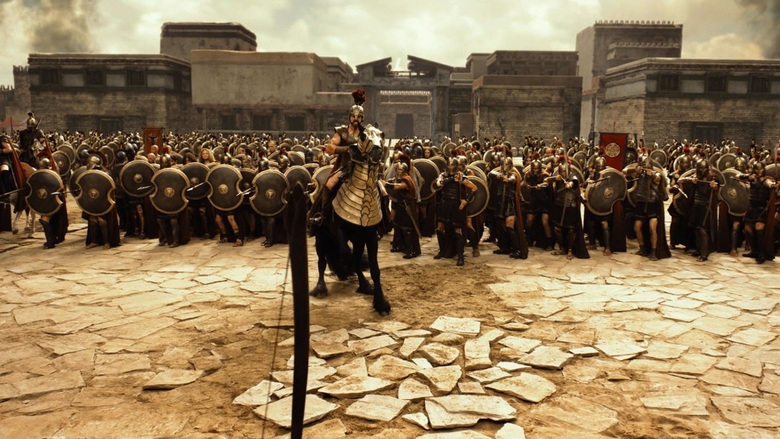 So much for The Legend of Hercules. It’s an awful movie, joyless and soulless. It adds nothing that we haven’t already seen in Gladiator, 300, or Troy. The performances are almost universally dreadful, including the horrible overacting of Amphitryon (Scott Adkins) and the wooden or otherwise off-kilter performances of the other leads. The special effects are either unremarkable or amateurish; the Nemean Lion as well as the lightning effects towards the end are among the most awful effects that I have seen recently in a major Hollywood movie.

Furthermore, the editing is all over the place, with some strange cuts that frequently give you the idea that you’ve missed part of the story. The movie is also curiously bloodless – for all the fighting and killing, there is virtually no blood in sight, and the camera cuts away to avoid showing any serious harm. Throw in a clichéd, melodramatic, unoriginal, and uninspired story and you have a product that you can – and ought to – give a miss.

Right now, the Dwayne Johnson vehicle Hercules is doing the rounds in theatres. This movie is based on a series of graphic novels and certainly looks like it offers a better take on the subject. The fact that it is directed by Brett Ratner doesn’t instil a lot of confidence, but it could hardly be a worse movie than this disposable piece of fiction, can it? In any event, once I’ve seen it, I will post my thoughts on this very blog.