Perhaps you already know this, but the menu option ‘Forum’ on the Ancient Warfare website will take you to RomanArmyTalk (or ‘RAT’ for short), a discussion forum for anyone with an interest in the ancient world and in ancient warfare in particular. The forum actually predates Ancient Warfare and is the place where the magazine was originally conceptualized. Many of Ancient Warfare’s regular contributors were – and often still are! – active on RAT. 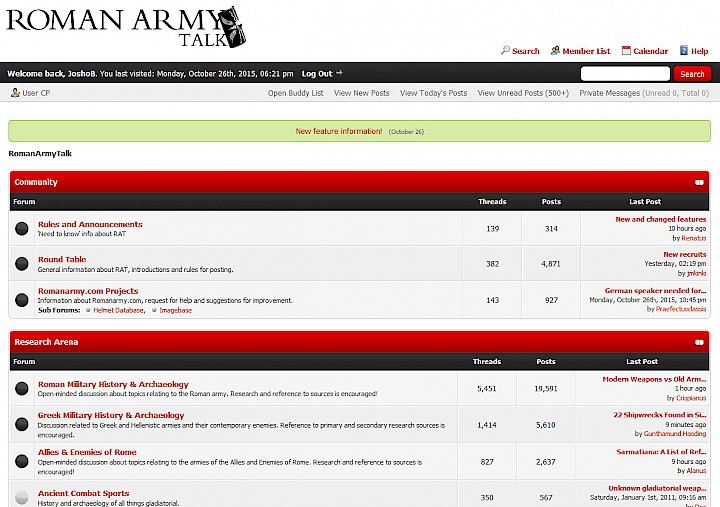 The forum ran on different software for a long time and was getting a bit slow and cumbersome. In the past week, Jasper Oorthuys, founding editor of Ancient Warfare and managing director of Karwansaray Publishers, as well as webmaster for RAT, worked hard on porting over the contents to a new and much better piece of forum software. The new and improved RomanArmyTalk forum is now much quicker and has more features than ever before.

There are many different boards available, each covering a particular subject. Readers of Ancient Warfare and Ancient History Magazine will probably be most interested in the boards grouped together under the heading ‘Research arena’. You can go there to talk about ancient Greece, ancient Rome, or another ancient culture. There’s also a board specifically dedicated to discussion references and posting reviews, which you might also find of interest. The community tends to be friendly and open to newcomers.

So, if you want to talk to like-minded people about the ancient world, or just follow some interesting discussions, you should hop over to RomanArmyTalk.