The next issue of Ancient Warfare, VIII.4, is at the printer’s and should arrive back at the office at the end of next week or slightly later. This issue deals with the Seleucid Empire, one of the large Hellenistic states that emerged after the death of Alexander the Great in 323 BC and the Wars of the Successors that followed it.

Michael Taylor’s historical introduction sets the stage for the articles that follow. If you don’t know anything about the rise and fall of the Seleucid Empire, or wish to brush up on your knowledge, you should start here. Michael added appendices about the Seleucid army, provincial government, and the court that lays the groundwork for the other articles.

This issue’s contribution by Mark McCaffery focuses on the rise of Seleucus himself, who was one of Alexander’s generals – a commander of the hypaspists – and managed to wrest control over the heart of the empire from his rivals.

Spyros Bakas provided texts and a photograph for this issue’s “Reenactor”. The reconstruction offered is that of an officer of the Seleucid Royal Guard. The Royal Guard itself, perhaps following the famed Immortals of the Achaemenid Empire, always numbered ten thousand men.

Newcomer Dennis Pricolo wrote an article on war-elephants, called “Beasts of battle”. The author tracks the origins of the use of war-elephants in Hellenistic armies and briefly discusses their effectiveness. War-elephants finally faded from history in the later second century BC.

Kai Grundmann’s article focuses on Hannibal, the Carthaginian general who spent some time at the court of King Antiochus the Great. He served as an advisor for Antiochus for a short while, but did not have a lot of military success, and eventually had to flee. 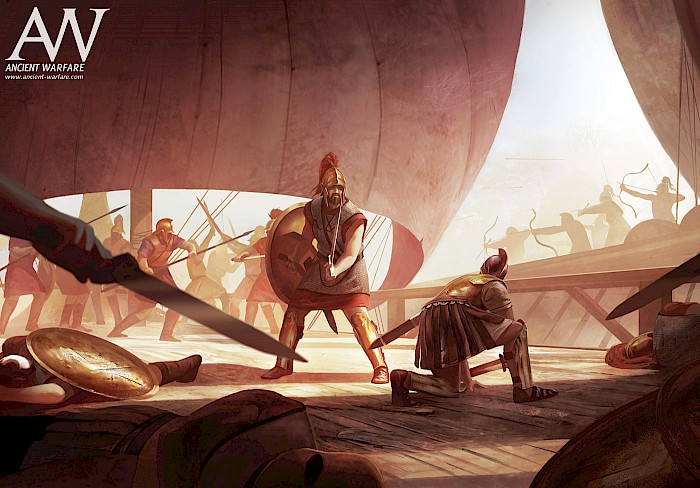 The article by Marc DeSantis discusses an episode in the naval war of Antiochus the Great, namely the Battle of Corycus in 191 BC. The centrefold that accompanies the article was created by Juhani Jokinen. The article is followed by a contribution by Konstantin Nossov on a mysterious stretch of wall in Iasus, a Greek city in Asia Minor. 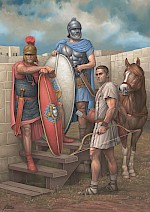 Rounding out the theme-related articles is a contribution by newcomer Gabriele Esposito. His article offers an overview of the later Seleucid army and points out how it was different from the earlier army. The description and the illustration by Angel García Pinto will be extremely useful to wargamers.

As usual, there are two non-theme-related articles. Dan Howard contributed a great article on reconstructing the armour of Agamemnon, using evidence from the Late Bronze Age. The final piece of equipment was created by Jeff Hildebrandt of Royal Oak Armoury. The final article was written by Jessica Billing and deals with Roman cavalry helmets. In this article, she argues that these pieces of kit were not mere parade helmets, but were most probably also used during actual combat.

You can pre-order issue VIII.4 now directly from our webshop. Want the issue delivered to your doorstep? Subscribe now and never miss another issue. If your subscription has expired, this is as good an opportunity as any to renew. As always, I look forward to receiving your comments!