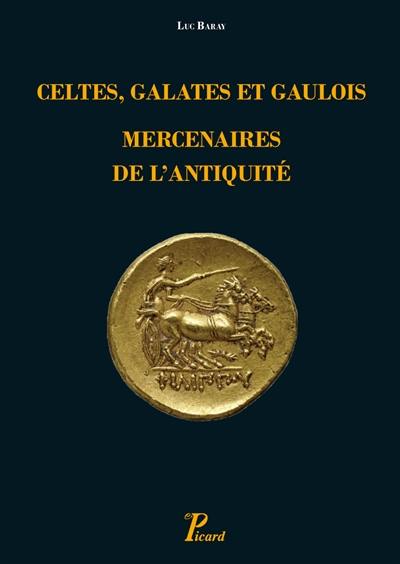 We've got two issues coming up that might (or perhaps: should) touch on Celtic mercenaries. The next one, Mercenaries (part 2), and issue XIV.1, Warfare in Hellenistic Asia Minor. Celtic mercenaries interesting to many, I know, but original research isn't terribly easy to find. Enter Celtes, Galates et Gaulois - Mercenaires de l'Antiquité by Luc Baray, which I noticed online a while ago and which dropped through the letterbox just before Christmas. It's in French, as you certainly surmised already, which means it's taking me a little longer to read and process. Here are some initial impressions.

According to Baray, the Celtic mercenary is, to ancient authors, the total barbarian. Being a mercenary is a bad start - after all, the citizen ideal is to fight for your own polity - but with the other 'default' warlike peoples such as Thracians, Scyths and Celtiberians, the Celts are almost the antithesis to civilisation. They are supposedly warlike, undisciplined, untrustworthy, violent, drunkard headhunters who make for terrible soldiers in every sense apart from their fearsome charge. Oh, and their weapons are ineffective blades without point that bend after the first impact. Baray shows this is repeated time and again by ancient authors, and copied uncritically since the nineteenth century. At the same time, we know the Romans copied Celtic metalworking products widely, and these one-shot chargers held the line at Cannae retreating slowly against massed the Roman legions. Clearly something doesn't add up.

Baray, a professor at Sorbonne university with several earlier books on Celts and Celtic mercenaries to his name, teases out a new view from the many ancient testimonials (Celtic mercenaries are mentioned 150 times between 480 and 4 BC in twenty authors) and archaeological information. The book discusses the reputation of Celtic mercenaries, their qualities and weaknesses, ethnic origins, conditions of service and pay, commanders, discipline issues and the relation to their paymasters, armament and logistics.

I've got much more to read in this book as yet, but it's fascinating so far and the bibliography might prove to be... expensive.