While similar games had existed before, developer Blizzard’s Diablo (1996) set the template for what we now refer to as ‘action role-playing games’ or ARPGs for short. In an ARPG, you take control of a character, usually belonging to a particular class (similar to character classes in, say, Dungeons & Dragons), and by killing monsters your character gets experience points and levels up, unlocking new skills and abilities.

One of the best of these types of games is Titan Quest. Originally released in 2006 by now-defunct publisher THQ, the game is set in the ancient world. The player takes on the role of a Greek would-be hero (or heroine), apparently a native of the town of Helos in Laconia, who sets off to figure out why on earth the world is suddenly being attacked by a wide variety of fabulous creatures, ranging from satyrs to cyclopes and even stranger creatures.

The game is divided into three acts, though play proceeds virtually seamless from one area to the next. You start off in ancient Greece, making your way from Helos to Sparta, where none other than King Leonidas gives you some more information and a few extra tasks. In act two, you travel to Egypt, where you’ll wander around tombs and temples, fighting giant scorpions and other monsters. Finally, for the third and final act, you travel to Babylon and from there go even further east, into China, before returning to Greece and fighting the final boss on Mount Olympus. 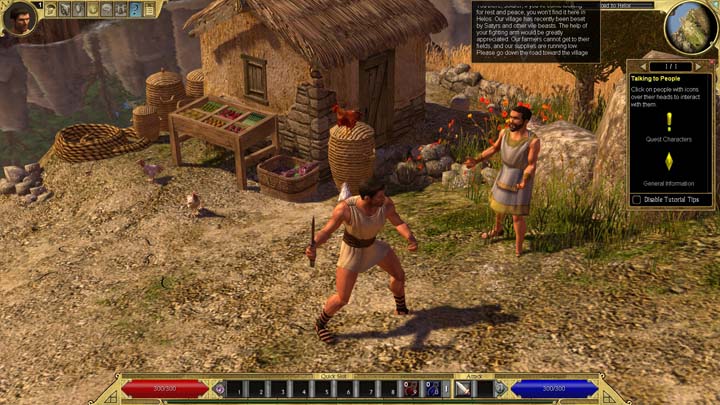 Titan Quest was commercially successful and received an expansion called Immortal Throne. The expansion pack added some improvements to the base game, as well as a fourth act set in the ancient Greek underworld. This fourth act was about the same size as the first act (acts two and especially three are a little smaller), so the expansion pack certainly added a lot to the base game. Some of the new areas, such as the Elysian Fields, are exceptionally beautiful.

Original developer Iron Lore eventually disbanded and publisher THQ went bankrupt. Nordic Games bought a lot of former THQ properties – so many, in fact, that they’ve rebranded themselves as THQ Nordic. Among these properties were Titan Quest and its expansion pack. They released an iOS version of the game and then went ahead and fixed a lot of the outstanding bugs from the original release, combined it with the expansion pack, and released it as Titan Quest: Anniversary Edition. People who already owned the original game on Steam were given the Anniversary Edition for free, which is remarkably sporting of them.

Titan Quest is a fantastic game that I’ve played through two or three times over the course of the past decade. I’ve also played it once in co-op with my girlfriend, and it makes for a great experience. There is a lot to like here for history buffs, too. The look of ancient Greece is great, even if the developers didn’t stick very close to a particular period (we meet Leonidas, who famously died in 480 BC, and also roam the city of Rhodes, which wasn’t founded until the late fifth century BC). The same applies to Egypt, while for Babylon and the Far East the developers seem to have relied more on fantasy than on history.

Like in the game Age of Mythology, the look of certain monsters has been taken more or less directly from classic Ray Harryhausen movies. The gorgons, for example, are similar to the Medusa from 1981’s Clash of the Titans, with their snake-like bodies and their use of bows and arrows. The satyrs, with their goat heads, should really be more properly referred to as panes, but that’s a minor quibble. Some creatures, especially once you leave Greece behind, owe more to Dungeons & Dragons than conventional mythology, but Titan Quest never claims to be accurate in any case.

That the developers did do their homework is clear from the presence of storytellers in some towns. Non-player characters (or NPCs) come in two varieties: those who give you quests (either part of the main story or side missions) and those who convey information or add to the flavour of the game. The storytellers belong to the latter category, and they will regale you with comprehensive summaries of the stories of Heracles, the origins of the gods, the creation of the world according to the ancient Egyptians, and so on. If you’re into mythology, you’d do yourself a favour to seek the storytellers out. 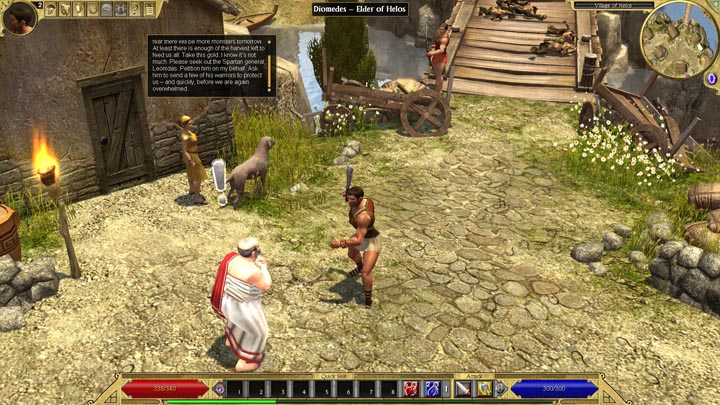 As far as the game mechanics are concerned, it really is Diablo set in ancient times, with one major difference: you don’t pick a class at the start of the game. Instead, the first time you level up, you get to pick one of nine masteries. A mastery consists of a group of skills (either active skills that you need to activate or passive abilities that are always on). A few levels later, you have the option of picking a second mastery. Picking a second mastery is optional: some players prefer to pour all of their skill points, which are awarded at every level up, into a single mastery.

The masteries you pick determine your character’s class. If you just stick with ‘Warfare’, you’ll be a warrior. But if you combine it with ‘Defence’, you’ll belong to the class referred to as ‘Conqueror’. It’s a very simple system, but it creates a lot of variety and leads you to really weigh your decisions: do you add a second mastery or not, do you pump points into increasing the level of a specific mastery (and thereby unlock more abilities), or do you first increase the effectiveness of skills you already have? While the world and the missions are largely linear, the mastery system adds a lot of replayability.

In short, Titan Quest was a fantastic game and the Anniversary Edition has given it a new lease of life. If you’re interested inn ARPGs or just want to hack-and-slash your way through a mythologized ancient world, you should really pick up the game, either on iOS or Steam. And if you’ve played it in the past, now is as good a time as any to play through the game again, preferably with a friend.