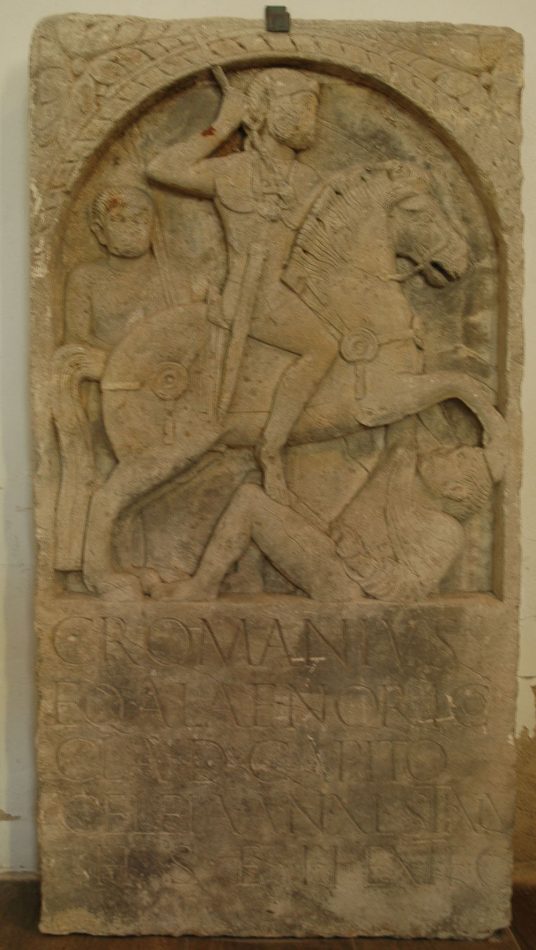 We've discussed Roman military tombstones before. Their quantity and often formulaic text make them an excellent source for displacement, unit structure, demographics, and the study of officer careers. Among the many thousands of these inscriptions, hundreds - I believe the best part of a thousand - were inscribed onto a large slab that depicts something meaningful about the soldier's life. We might see the symbols of his rank, the tools of his trade, his civilian status upon surviving until discharge, or the man himself in all his martial glory. Inevitably the memorials are full of symbolism that is less meaningful for us, but their endless variety makes a close study always rewarding. Let's take a look at a few stones from one specific category, the 'triumphant rider'.

Riding down the enemy 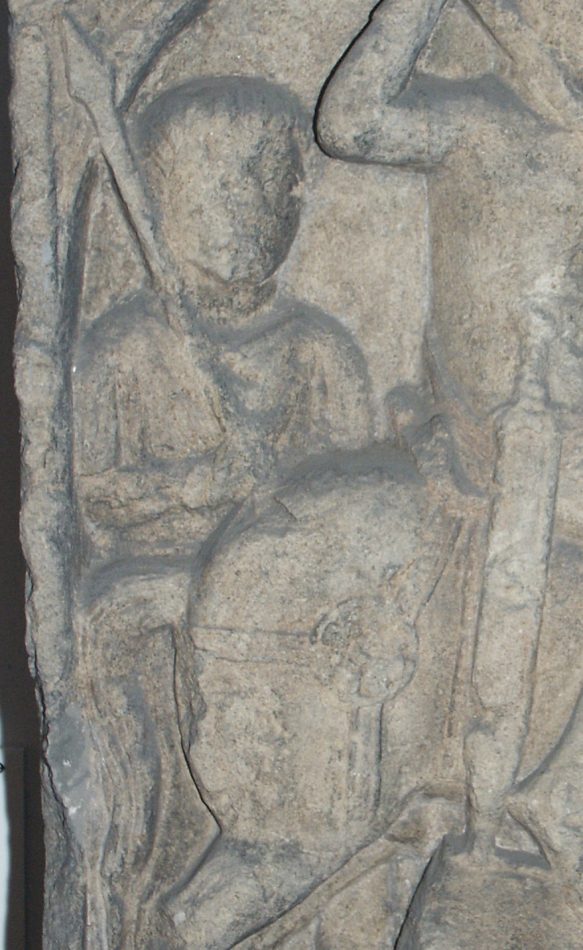 Detail of the tombstone of Leubius, now in Worms.

Mathilde Schleiermacher inventoried 134 Roman cavalry tombstones in the mid 1980s - a handful more are known nowadays - showing the trooper in full gallop, usually riding down a barbarian who lies beneath the hooves of the horse. The stones were almost always set up by auxiliary cavalrymen (but there are a few legionary equites steles as well), who could afford the often substantial memorials. If those memorials survive in a decent state, the different details can be fascinating. Let's look at some. 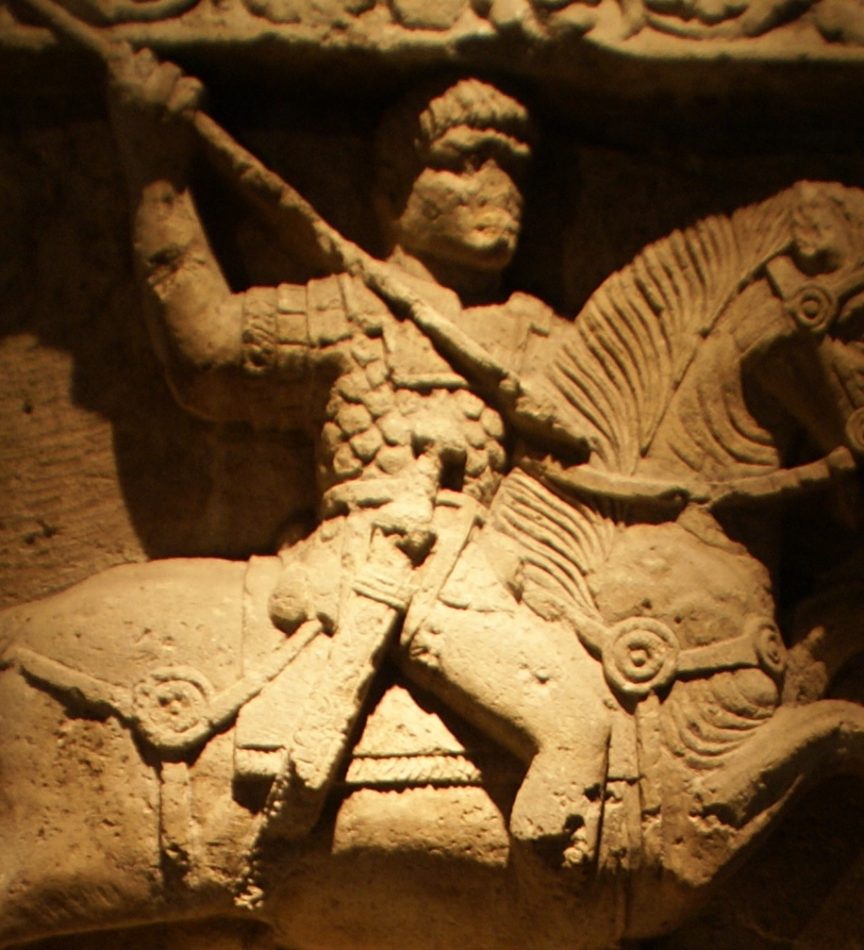 Detail of the tombstone of Vonatorix, now in the Rheinisches Landesmuseum, Bonn.

The calo, the trooper's servant is commonly seen on another type of cavalry tombstone, where the veteran is depicted on a couch enjoying his funerary banquet while his servant, carrying two lances, leads his horse on another section of the stele. The calo is usually absent when the trooper is shown in action, but not always. See for instance the stone of Leubius, now in Worms, or that of Romanius at top.

The barbarian under Andes' tombstone. Now in the Mittelrheinisches Landesmuseum, Mainz. (c) Livius.org

The armour of the trooper is usually hard to distinguish. When only a cuff of a tunic is seen under some kind of over-garment, we have to presume mail was painted on. Sometimes, however, the armour has been sculpted, such as on the torso of Vonatorix, now in Bonn, who clearly wears a scale cuirass.

Two barbarians ridden down by Ingenuus. Now in Worms.

What about the barbarian victims, sometimes seemingly trying to crawl out of the way, sometimes apparently trying to fight back? They're not always depicted in fact, though whether there's any meaning in that is unknown. Schleiermacher noted that they are invariably there in steles from Britain, seldom in those from Germania Inferior and about 50-50 in Germania Superior. Perhaps it was just local fashion.

The man under Andes' hooves certainly seems to be trying to take his revenge, while Carminius Ingenuus perhaps wanted to show how brave he was; not just a signifer (note the interesting standard), but he defeated two barbarians at once! 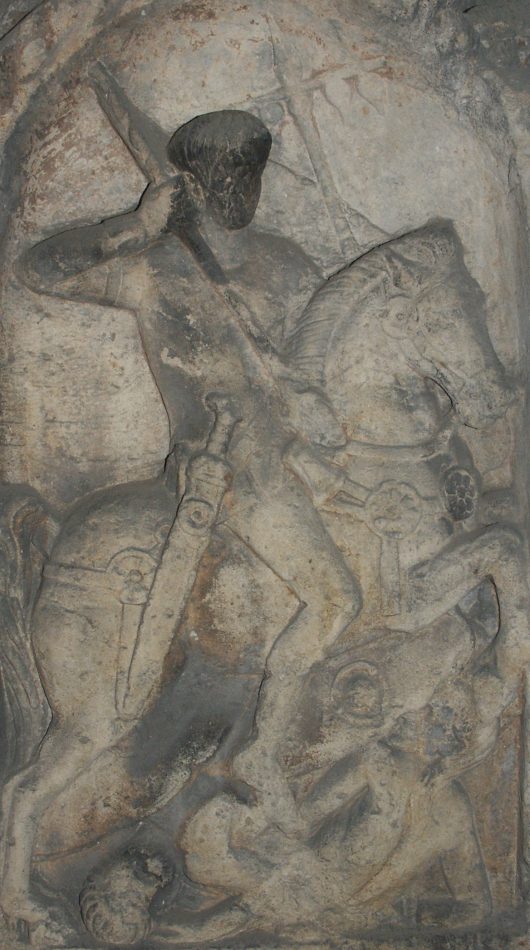 Tombstone of Ingenuus the signifer.