On the third day of the conference at Aberystwyth, Jan van der Crabben, who is the founder of the online Ancient History Encyclopedia and works as a designer for the Creative Assembly, gave a talk about historical accuracy in games. Afterwards, he set up a gaming laptop to showcase the latest Total War game, Total War: Arena. Some of us were able to play the game and we were all given codes to be able to unlock and play the game on Steam.

The game is still in the alpha stage, which means that isn’t yet feature-complete, many things might still change, and there are bugs. (Beta means that the game is feature-complete, but probably still has bugs. A game goes ‘gold’ when it is deemed ready for release.) Nevertheless, since returning from Aberystwyth I’ve had some time to play around with Total War: Arena and feel ready to share my preliminary thoughts on the game.

Total War: Arena is basically a Total War­-styled ‘MOBA’ (multiplayer online battle arena), and has some things in common with Defense of the Ancients, Dota 2, League of Legends, and other games of that ilk (and, as my colleagues point out here in the office, especially similar to World of Tanks). As with those games, Arena will be free-to-play, which means that you can download it and play it at no cost, though you will have to pay for some things eventually. A good free-to-play game generally remains playable even if you don’t pay for anything, and some of the best of them merely allow the purchase of vanity items rather than game-enhancing items to prevent the game from becoming ‘pay-to-win’ (where the player who pays more becomes more powerful than those who pay less).

The game is almost nothing like the normal Total War games. There is no strategic map. Instead, Total War: Arena focuses completely on the battles, with an emphasis on speed above all else. Most matches seem to last a quarter of an hour or less. 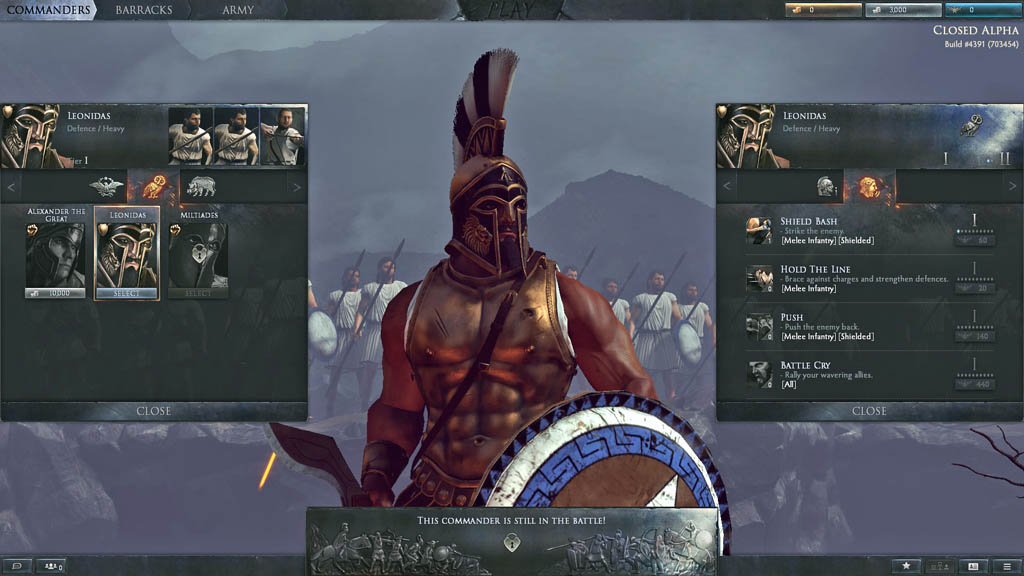 The game is played by twenty players divided into two teams. Once you sign in, you have to pick a commander of your choice. Commanders come in three different classes: assault (e.g. Miltiades), defence (e.g. Leonidas), and support (e.g. Julius Caesar). Your commander is in charge of three units and attached to the first. As you progress through the game, you can unlock new unit types and customize your commander’s army. Once you’re happy with the choices you made, you click the big button marked ‘Play’ in the top centre of the screen, at which point the game starts creating a match.

Even in this early stage of the game, I never had to wait long to get a game started, which means that there must be a sizeable amount of people already playing. Once the game has loaded for all players, you are dropped unto the battle map (e.g. Marathon or Thermopylae). Right now, the only way to win is to either wipe out the enemy or to capture and hold the victory point. If you’ve played a Total War game before, you probably know what to expect, and most of the rules are familiar. However, in Arena, the battles move even more quickly than, say, in Rome 2 or Shogun 2.

To my mind, the battles go too quickly: in one of my first games, I picked Miltiades, who was in command of one unit of archers and two units of basic spearmen. Before the match starts, you get to pick your starting location. The map was Marathon, so I deployed near the ships, expecting the enemy to be there. However, once the match started, I only saw my allies. They were moving into one direction and I decided to follow them, making my way through the trees so that I could attack from ambush. Before long, I ran into one of the enemy players and managed to rout their units, though with heavy losses. Then, another enemy player popped up and routed my own troops in short order. There was almost no time to engage in any kind of meaningful manoeuvres.

Once your units have been wiped off the map, there is nothing left to do except either continue to watch the map as an observer or drop out of the game (which is a viable option, but will lock your commander for the duration of the battle). In a regular MOBA, at least, your ‘hero’ would respawn after a short period of time back at base. Here, though, once you’re finished off, there’s little to do except leave and start another match with a different commander. 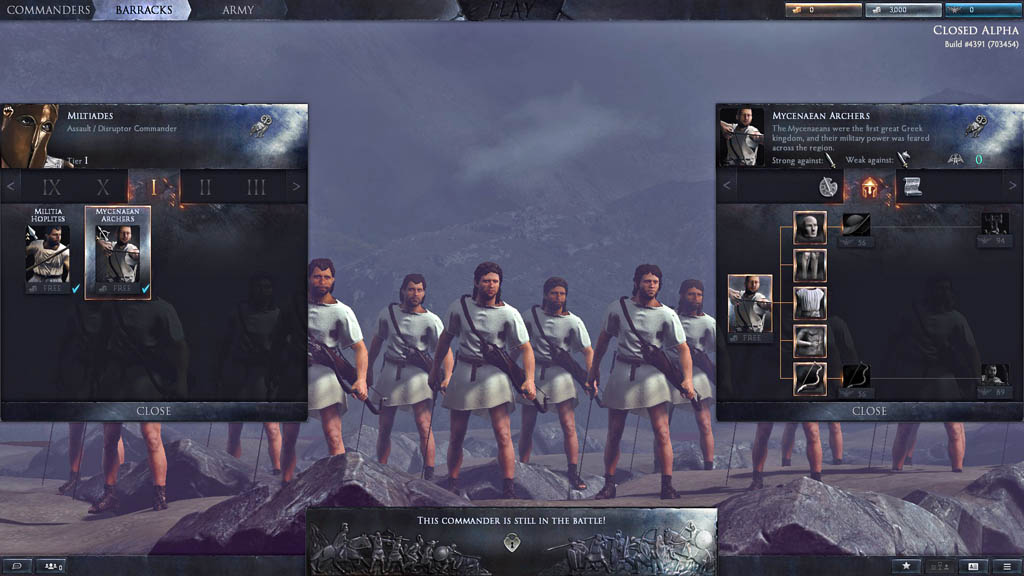 All in all, Total War: Arena seems like an interesting take for the series. If you are looking for any kind of historical accuracy, though, this is definitely not your game. The first map we were shown that Wednesday was supposed to be Thermopylae, but it looked nothing like the real site, with steep, almost cartoonish cliffs marking off the famous pass. Likewise, players can pick whatever commanders they want, which means that you can have Caesar and his Late Republic army versus Leonidas and his Early Classical hoplites.

I also don’t think the game is very interesting if you enjoy the regular Total War games. Compared to something like Total War: Rome 2 or the more recent – and quite excellent, I might add! – Total War: Attila, this is a very small game, with none of the breadth and grandeur of those other entries in the series. While the battles in the regular games are vast and exhilarating (though not without their share of problems!), the battles in Arena feel inconsequential, and are over far too quickly.

Nevertheless, I can imagine there being an audience for this game. I can see that there is lots of interesting stuff to discover, especially when it comes to upgrading your troops over the course of many hours of play. But I do expect that the audience for this game will be different from the one that favours the regular games in this series. And that’s perfectly fine. There’s no other company out there that does what the Creative Assembly are doing, and as we talked about during the conference, it’s games like those in the Total War series, alongside popular books and movies, that serve as kind of a gateway drug into ancient military history.