Justinian’s wars in the Mediterranean area led to many situations rife with treachery, desertion and defection. However, it is arguable that this was most prevalent during his Italian war, especially in the initial stages. In this article, I will consider how and why senior Gothic nobles either defected to the Roman cause or behaved treacherously, why Roman soldiers deserted their posts or joined the Goths, and why the Italian aristocracy, clergy and populace placed their loyalties sometimes with the Goths and sometimes with the Romans. I will evaluate the extent to which such decisions influenced the outcome of the conflict.

Our sources include: Procopius (ca. 500–ca. 560), who participated in the 533–540 African, Sicilian and Italian campaigns (when he undertook logistical and intelligence-related missions at Belisarius’ command), as well as Cassiodorus, Jordanes, the Liber Pontificalis and Marcellinus Comes (all published ca. 550). Although these sources relate very recent and similar events, this may not have prevented hindsight from entering these accounts and they did not enjoy significant historical perspective.

Justinian (r. 527–565) launched an invasion of Sicily in 535 and Italy in 536 to attack Theodahad. The latter was king of the Goths and Italians (r. 534–536), who was treacherously assassinated by fellow Goths after the loss of Naples in November 536 to the Roman army led by Belisarius (general from 527 to 565). Treachery, desertion and defection will be tested in this essay by a re-interrogation of the sources relevant to Belisarius’ conquest of Sicily in 535 and his invasion of Italy in 536. I hope to show that Theodahad’s regime collapsed because of bad luck and treachery by his subordinates, combined with the disparity in resources available to him compared to the Emperor Justinian.

The campaigns of Justinian

Justinian directed campaigns to take western Roman territories conquered by Germanic groups in the fifth century. In 533–534, Belisarius defeated the Vandals and retook North Africa. Strategically, this facilitated subsequent wars in Sicily and Italy from 535 and in Spain in ca. 554. From 526–534, Gothic Italy had experienced eight years of unstable rule during which Theodahad became notorious for land-grabbing in Tuscany, something Queen Amalasuntha curbed (Variae 10.3.6; Wars 5.3.2–3.).

Theodahad was invited to join the Gothic monarchy in late 534. Justinian’s first move in his campaign to re-take Italy was to nurture treachery within the Gothic royal family by offering the bribe of luxurious retirement in the East, in exchange for abdication in his favour, first to Queen Amalasuntha, in 534, and then to King Theodahad, in 535–536, which they each considered but declined (Wars 5.3, 4 and 5–7.). Theodahad showed himself to be treacherous towards his regal cousin by arranging circumstances so that Queen Amalasuntha could be murdered in early 535 (Procopius, Anekdota 16.5).

the emperor, upon learning what had befallen Amalasuntha, immediately entered upon the war (…) he first commanded Mundus, the general of Illyricum, to go to Dalmatia, which was subject to the Goths, and make trial of Salona.

Theodahad’s forces initially defeated Justinian’s in Dalmatia, and this victory clearly encouraged Theodahad to resist Justinian. But Justinian then sent Constantianus into Dalmatia who took Salona. 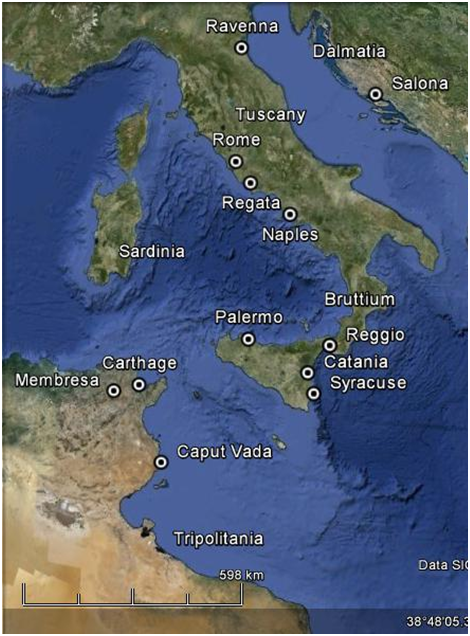 In a vain attempt to avert an escalation of war, Theodahad then forced the Senate of Rome to appeal to Justinian not to attack Sicily and Italy (as he had the Vandals in 533). In May 535, he had the Senate write to Justinian: “If I was ever esteemed by you, most devoted of princes, love my defenders [i.e. the Goths]’ (Variae 11.13.3).

Such extracts from Cassiodorus seem to provide good evidence for the great strength of the commitment to the Gothic regime among Italian elites. However, Barnish notes the possibility of duress and Bury suggests that Theodahad threatened some Roman senators, “with their wives and children”, with massacre to encourage them to send this communiqué. Theodahad also proposed to install a Gothic garrison at Rome to encourage loyalty. This shows that Theodahad feared that the Roman elite would defect to Justinian, and later many, but not all, did.

The conquest of Sicily

Jordanes summarizes the conquest of Sicily in 535 by Belisarius: “the Goths (…) holding (…) Syracuse (…) surrendered of their own accord to Belisarius, with their leader Sinderith” (Getica40.308), which suggests defection by the Gothic commander to the Roman cause. All but one city in Sicily surrendered easily. The Goths at Palermo, resisted until (Wars5.5.12–18):

Belisarius ordered the fleet to sail into the harbour, (…) filled all the small boats of the ships with bowmen and hoisted them to the tops of the masts (…) the enemy were shot at from above, fell into (…) fear [and] delivered Palermo to Belisarius by surrender (…) [Belisarius] marched into Syracuse, loudly applauded by the army and by the Sicilians and throwing golden coins to all.

This suggests that the populace, and perhaps the Goths, were won over by financial incentives and it was because Sinderith and the garrisons defected or surrendered (most of them treacherously quickly) to Belisarius that Theodahad lost Sicily so quickly.

However, treachery was not limited to one side. Serious Roman army mutinies in North Africa and Sicily disrupted and delayed Belisarius’ plans and created time for Theodahad to prepare to defend mainland Italy (Wars 4.14–15; Jordanes, Romana 369–370; Marcellinus 13.1). The mutiny in Africa started at Easter (23 March 536) and, whilst Belisarius went there to regain control, there was another mutiny in Sicily.

It seems an extraordinary coincidence that both mutinies occurred within three months of Belisarius completing the conquest of Sicily (31 December 535), at the start of the 536 campaigning season, when his next logical step was to invade Italy. Another coincidence is that the second mutiny, in Sicily, occurred after Belisarius had dashed to Carthage and Membresa to quell the first. As these Roman mutinies created valuable time for Theodahad to prepare his defence of mainland Italy, it may be reasonable to hypothesise that he may have had a hand in instigating them.

Theodahad’s next line of defence was to deploy an army to defend Bruttium, led by his son-in-law Ebrimuth. He did so with the full support of the Gothic nobles who, during an audience with Justinian’s ambassadors Athanasius and Peter in mid-536, passed letters addressed to them from Justinian to Theodahad (Wars, 5.7.22.). Theodahad’s southern army, led by Ebrimuth, was tasked with preventing Belisarius’ army from crossing from Sicily to mainland Italy, but it failed because, as Marcellinus’ Chronicle summarizes, “Ebrimuth, son-in-law of Theodahad, deserted the royal army in Bruttium and fled to Belisarius in Sicily.”

Jordanes’ Getica (60.308–309) records, “When Ebrimuth (…) saw that his side was the weaker (…) he switched over (defected) to the side of the victor and, of his own accord casting himself at the feet of Belisarius, he decided to serve the rulers of the Roman Empire.” In his Romana (370), Jordanes explains that in Sicily, “Ebrimuth (…), who had come with an army to fight Belisarius (…) surrendered to him of his own accord. He urged him to come to the aid of Italy which, suspicious of his own arrival, now eagerly desired him.”

This suggests other Italians and Goths were minded to defect to the Roman cause. It is supported by, Procopius, who writes that “Belisarius (…) crossed with (…) the army (…) to Reggio (…) and every day the people of that region kept coming over to him.” However, Procopius tempers this enthusiasm by adding that “their towns had from of old been without walls, they had no means at all of guarding them, and because of their hostility toward the Goths they were, as was natural, greatly dissatisfied with their present government.” He continues that “Ebrimuth came over to Belisarius as a deserter from the Goths, together with all his followers (…) he was straightaway sent to the emperor and received many gifts of honour and in particular attained the patrician dignity” (Wars 5.8.1–3). However, it took Belisarius about three months to reach Naples – perhaps there was local resistance.

So Theodahad’s plan to defend Bruttium was thwarted by the defection of a subordinate, as in Sicily. Theodahad evidently placed a great deal of faith in certain family relationships and did not imagine that, “he who is united to a ruler’s family is placed in the very bosom of fame” (Variae 10.11.4), would end, ironically, with his son-in-law gaining fame by facilitating Belisarius’ army-landing in Bruttium and then being elevated to patrician rank by Justinian.

It was no wonder that Ebrimuth was rewarded so handsomely, as the importance of his defection cannot be underestimated. Had he defended the coast, Belisarius would have lost men, equipment and time and perhaps even been repulsed. Ebrimuth’s decision in 536 can be compared to that by Julian, the east Roman dux of Septem, who in 711, with the aim of aiding Wittiza, the Visigothic king, against a usurper, decided to facilitate the transfer of Muslim troops from Tangiers to Spain which then developed into the conquest of Visigothic Spain. After Ebrimuth’s desertion, Jordanes claims that “when the army of the Goths found this out, they held Theodahad suspect and clamoured for his expulsion from the throne and for the appointment as king of their commander Witiges, who had been his armour bearer” (Getica 60.309).

Jordanes’ statement conflicts with Procopius’ account, who states that the Goths remained loyal to Theodahad until after the fall of Naples several months later. Amory argues that “Jordanes’ context suggests that his [Ebrimuth’s] desertion may have been connected to knowledge of the treachery of his father-in-law Theodahad, but this may have been the historian’s hindsight at work” (1997, p. 373).

The second part of this article will be posted tomorrow and also includes a list of relevant books and journal articles for further study.